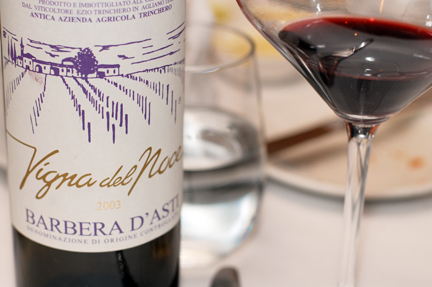 The Trinchero winery first came to my attention many years ago while living and working in New York and I have followed the wines ever since, tasting them whenever I get the chance.

Of all the Barbera that floods the U.S. market these days, Trinchero — a Barbera d’Asti producer and Natural winemaker — is one of the least likely to reach a city like Houston, Texas, where the “100-point burning embers” (thank you, Robert Parker!) of Colgin Cellars are considered a benchmark for the finer things in life.

But for reasons not wholly unknown to me, a small Houston-based importer called Dionysus brings in a number of Piedmont wines that I love.

When my friend and colleague Scott Sulma included the 2003 Vigna del Noce in a tasting menu flight the other night at Tony’s, I was skeptical. The last time I tasted this wine, a few years ago, it seemed to be succumbing to the overly ripe vintage. And while it still had healthy acidity, a jammy note had begun to emerge.

But when we tasted it a week ago Tuesday and then again last Tuesday, it showed brilliant acidity, meaty but balanced fruit, and the focused tannin that Asti-grown Barbera often develops when vinified in the traditional Astigiano and Monferrato style.

Revisting the wine made me think that the previous bottle I had purchased at a wine store in Houston had been slightly cooked.

I thought the wine was fantastic…

I was surprised to find a bottle of entry-tier Joly labeled Vieux Clos (the way it is labeled in France) as opposed to the Americanized Clos Sacres (when we visited Coulée de Serrant, Virginie Joly told us that a previous U.S. importer had advised her father that Americans would never buy anything labeled vieux).

The 2009 had more body in the mouth than recent vintages I’ve tasted but it was fresh and clean on the nose. Another huge winner for me (although at $25 a glass at Tony’s it’s not exactly recession friendly).

But the biggest surprise of dinner on Tuesday was an AMAZING Cahors by (Natural?) winemaker Domaine Cosse Maisonneuve. (The winery doesn’t have a website but I did find this page.)

Most of the Cahors that makes the Atlantic crossing is so tricked out and oaked that it tastes like sawdust (at least in my experience).

This wine had acidity and fruit and an ethereal earthiness that really thrilled me… I have no idea how this wine made it to Houston (another crazy importer?) but I’m looking forward to putting a few bottles down in our cellar.

It paired brilliantly with the rib-eye with balsamic reduction at Tony’s.

I was dismayed to read 1 Wine Dude’s post on Robert Parker’s nastiness and wholly unwarranted rant against our dear friend Alice Feiring in a recent Sommelier Journal interview.

IMHO, 1 Wine Dude (aka Joe) is the top wine blogger in the enoblogosphere right now: he knows how to balance the tannin of truth with the fruit of joy, adding just enough acidity to keep it all bouncing. I liked the way that he approached this sticky subject and how he moderated the comments that followed.

People are going to wonder why I continue to write about wines imported by Louis/Dressner. In the light of Mr. Joe Dressner’s myriad waspish attacks, I’ll probably regret writing about the below wine. My blog is about our life and the wines and foods and poems and songs and films and joys and challenges that we embrace and face every day and I just couldn’t omit this wine. As the ex-Wine Digger once pointed out to me (and he was right), wines are an expression of the places where they are made and the people who make them — not the tertiaries who import them. And I certainly hold nothing against Mr. Dressner and only wish him a speedy recovery. 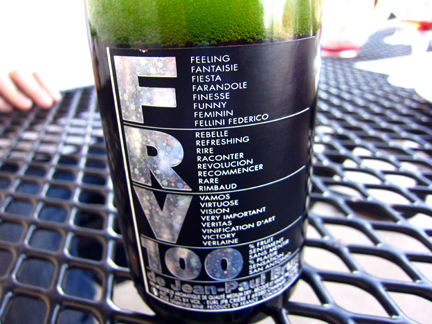 What a thrill to get to taste (FINALLY) the FRV100 by Jean-Paul Brun! The name of this gently sparkling 100% Gamay from Beaujolais is a rebus (as they say at the counter at Brooks Brothers in Manahattan, there are those among us who know Latin and those who don’t): FRV100 for eff-er-ves-cent, effervescent or sparkling in this context.

I loved everything about this wine: the low alcohol (around 7.5%), the gentle fizziness, the wonderful WONDERFUL fruit on the nose and in the mouth, and the playful, bright packaging (the winemaker uses the rebus as an acronym for a wonderful plaisir, a prosodic form adored by the early Occitan poets). FRV100 and barbecue? FRV100 and mole from Polvo’s? FRV100 and Tracie P’s nachos? HELL YEAH! I think it’s safe to say that this will be our wine of the summer of 2011.

But inasmuch as I believe that all wines are an expression of epistemological reflection, this bottling is all the more remarkable because — as I read in Mr. Dressner’s glistening marketese — not only does the Pope of Natural Wine like this wine, but so does Mr. Robert Parker, Jr.! The Emperor of Wine has called Brun’s wines “beautiful” and ranked the winery as a four-star affair, according to the Pope’s site. Felicitously unbelievable!

I loved the wine so much that I’ve paired it with a screening of Fellini’s 1957 Le notti di Cabiria (Nights of Cabiria) on May 18 at the Alamo Drafthouse Ritz in Austin, where I’ll be speaking about the film and the pairings (btw, the paperback version of my translation of Brunetta’s narrative guide to The History of Italian Cinema was recently published by Princeton University Press).

Why did I pair it with Fellini’s transitional classic (one of my favorite movies of his, btw)? You’ll just have to come to the screening on May 18 to find out!

@JoeDressner and @RobertMParkerJr: I’ll be happy to comp either or both of you if you’d like to attend!

A wine writer whom I admire greatly (and who happens to work in the editorial office of the Wine Spectator) wrote me today to express his dismay (warranted) with the recent back-and-forth between VinoWire (which I co-edit with my friend Franco Ziliani) and Wine Spectator executive editor Thomas Matthews. (I translated and posted Franco’s most recent entry today).

I can understand his position. After all, we are wine writers, not ideologues. My colleague is right to point out that our debate and discussion should be carried out in a spirit of collegiality and good faith. But I also feel that it is difficult for Americans (in general, not him specifically) to understand how our lists and rankings offend Italian winemakers and Italians in general. Italy was born as a “wine nation” and wine is woven indelibly into its national identity.

Italy’s founding fathers (above) envisioned wine and indigenous grape varieties as an integral part of the nascent Italian economy (remember: beyond its value as a luxury product, wine was considered a food stuff).

One of the reasons why Piedmontese winemakers grow Nebbiolo today is that Italy’s first prime minister, Count Camillo Cavour (1810-1861), recognized its potential in fine winemaking.

The primary reason why Tuscan winemakers grow Sangiovese is that Italy’s second prime minister, Baron Bettino Ricasoli (1809-1880), wrote extensively and prolifically on the virtues of Sangiovese married with Tuscany’s terroir and he boldly replanted his estate — where he had grown a wide range of French grapes — with Sangiovese, Canaiolo, and Malvasia.

Americans do not feel the same connection to wine that the Italians (and French) do. Winemaking was born in this country as a luxury industry and the tastes of our opinion leaders (Robert Parker and James Suckling foremost among them) have been shaped by a youthful winemaking tradition that favors opulence and power over balance and nuance. There’s no doubt about this. Imagine what it feels like to be an Italian and to read that one of your country’s greatest wines (Case Basse) receives pitiful scores (and even in its top vintages!) while a young Brunello producer (owned by one of Italy’s largest commercial winemaking groups) received the coveted 90+.

In the spirit of healthy debate, I encourage you to take a look at the comments at VinoWire to get a sense of the offense perceived by some of our readers in Italy.

What I like even more than the title of Tyler Colman aka Dr. Vino’s Wine Politics (UC Press) is what the binomial title implies: “wine is politics” and “wine is — by its nature — political.”

In North America, where we consider wine a “luxury product,” we are apt to forget the historically political significance of wine and the wine trade. Over at Divino Scrivere, one of my favorite Italian wine blogs, the authors recently reminded their readers that “il vino è politico” in an eloquent post on one of the world’s most poetically engagé winemakers, Bartolo Mascarello, whose “No Barrique, No Berlusconi” labels continue to inspire the enlightened among us.

The leader of the first generation of critical theory Theodor W. Adorno wrote famously that “under the aegis of cultural industry… art and ideology are becoming one and the same thing.” In reading Dr. V’s book, I couldn’t help but think of Adorno and make an analogy to the contemporary world of wine, driven by a new “cultural industry.”

Few winemakers are as overtly political as B. Mascarello, but today more than ever, the act of winemaking and the act of wine writing are inherently ideological and therefore political. More than ever before in the history of humankind, the acts of vinification and vinography are intrinsically ideological and political expressions, whether it’s the Gallo family concocting wines for the “misery market” or Mr. Bob “the difference with me is the impact is worldwide” Parker dictating which French winemakers will be able to sell their wines this year. (Oops, sawwy Mark Squires!)

From his account of the 1960s “‘magic chef’ who could transform bad grapes into good wine” (p. 69) to his excellent Keynesian approach to the hegemony of American wine writers, Dr. V provides meticulous historical background and astute insight into the powers that drive wine trends and sales in our country:

“As John Maynard Keynes noted in his General Theory of Employment, Interest, and Money, to try to predict the winner of a lineup of one hundred contestants in a beauty contest, the best tactic is to ‘favor an average definition of beauty rather than a personal one.’ Reviews by a powerful critic can organize the wine market into good, better and best, and prices will follow suit. But they may also steer consumers away from wines they might otherwise prefer.” (pp. 118-19)

Europeans are acutely aware of the political nature of wine: just last week, one Italian politician compared himself to a politically charged wine, Brunello, while another snubbed a famous Italian wine with historically political connotations, Lambrusco. Unfortunately, American wine lovers have remained in the political dark and know little about why they drink and even prefer the wines the find in their wine stores and supermarkets. I applaud Dr. V for this excellent scholarly work, sure to become “required reading” in any serious wine education program.

Do Bianchi did not publish a review of Alice Feiring’s new book simply because my friendship with Alice precludes me writing an entirely unbiased assessment but I cannot recommend it more highly. Do check out Leonardo Lopate’s recent interview with Alice: I really liked the definition of “natural wine.”

In other other news…

Check out this 1970s Gallo ad for “Blush Chablis”: “It’s what happens when a white wine decides to blush.”

Tracie, the girls, and I couldn’t be more geeked to share the good news: earlier this month, we closed on a house in the same Houston neighborhood where we’ve been living for the last eight years.