When I first launched the Italian Grape Name & Appellation Pronunciation Project I wanted to give a voice to Italian winemakers by creating a public platform where they could “speak” their grapes. The pronunciation of their grape names — their ampelonyms — can often prove challenging for Anglophones.

But as the project expands, I’m including a “layperson” of wine in this entry.

My friend Giovanni Gagliardi is not a winemaker: he’s what I call a “cultural entrepreneur” of Italian wine. A native of Calabria, he curates a website devoted to the wines of Calabria (VinoCalabrese.it) and he travels the country attending and speaking at all sorts of wine festivals (that’s how we met).

But most of all I wanted to include him because he is a simpaticone (see photo taken from his Facebook below).

In this week’s entry, Giovanni speaks “Magliocco,” a grape that we’ve seen very little of in the U.S. but that is making new inroads here.

Where Cirò is known for its Gaglioppo, the winemakers of Cosenza view Magliocco as the greatest indigenous expression of their enologic landscape.

In the U.S., I’ve tasted superb bottlings of Magliocco, including wines by Terra di Balbia (by my good friend Giampaolo Venica) and Librandi. And there are more and more wines making it here.

Magliocco (also called Magliocco Canino, Magliocco Ovale, and Magliuacculu) is a tannic grape with a wonderful roundness to it (when vinified monovarietally), good dark red fruit, and healthy acidity. The Terra di Balbia Magliocco is one of the best selling wines by the glass at Sotto in Los Angeles (where I author the wine list).

Thanks for speaking Italan grapes! 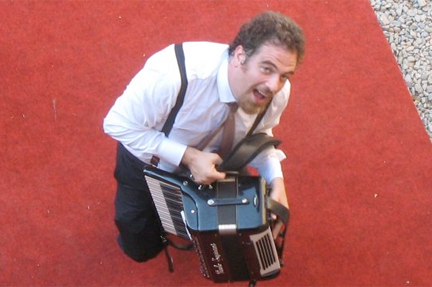 From the DEPARTMENT OF ROCK AND ROLL… 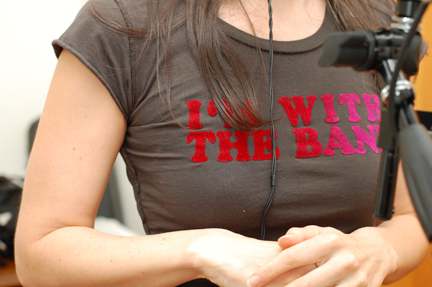 A rock and roll band invaded our house this weekend… 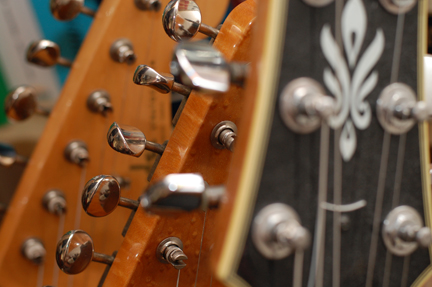 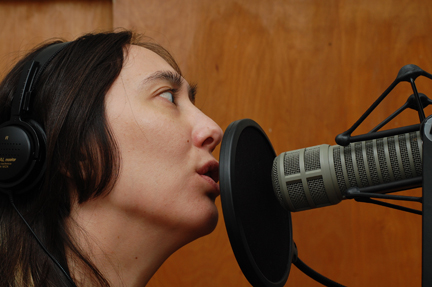 It’s always so amazing to work with Céline in the studio… incredible voice, incredible chops… 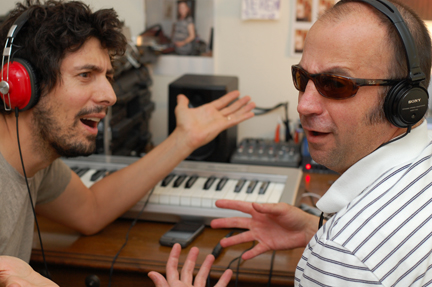 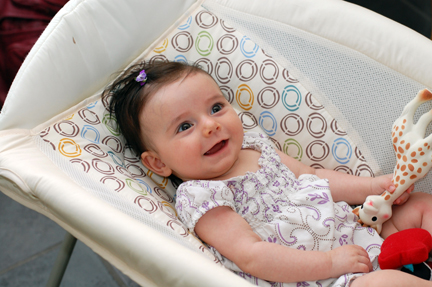 And the best part of having the band record its new album at our house? There’s always someone around to entertain little Georgia P. I wish yall could hear her laugh… it’s the SWEETEST thing… 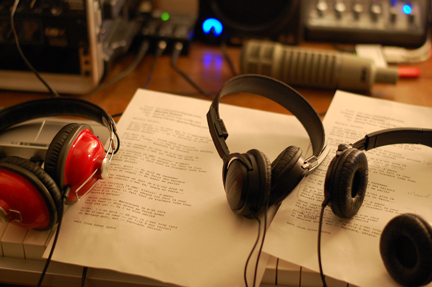 Yup, hell has frozen over once again and the band is getting back together…

Yesterday, we — Nous Non Plus — started working on our new album at Baby P Studios (above, my home studio).

And in other news…

Somebody got a new bouncy chair… :) 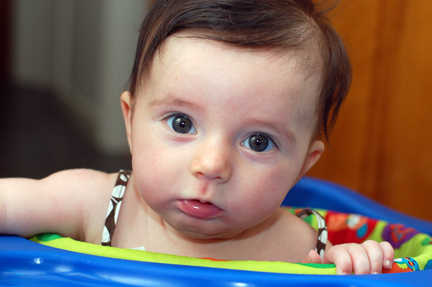 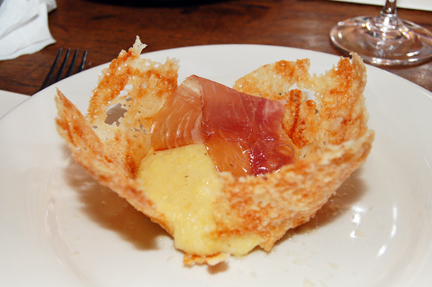 Bobby and Lachlan were in town yesterday hosting a luncheon at Vino Vino for their line of wines, Scarpetta, including their new Barbera del Monferrato, which we loved.

We’ve become friends after we traveled to Friuli together a few years ago and then Tracie P and I had one of our all-time favorite meals at their restaurant last year before Georgia P arrived. 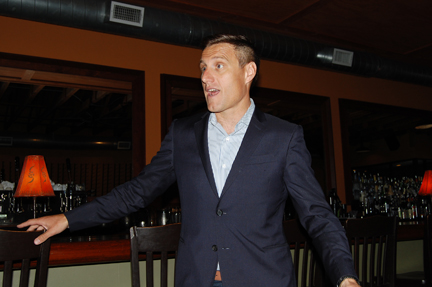 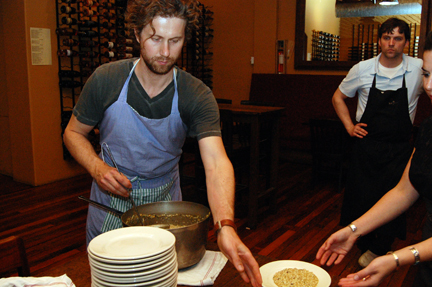 Chef Lachlan is the Indiana Jones of Italian restaurateurship in the U.S. His focus is intense but it never blurs his passion. The soulfulness of his cooking is never eclipsed by his celebrity. And yes, ladies, he’s single! 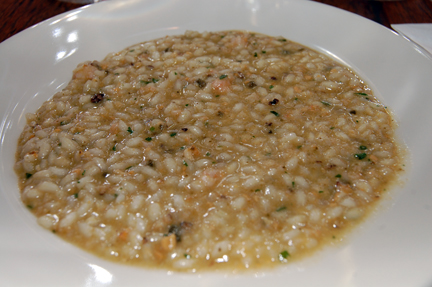 His riso adriatico was stunning. They had been in Dallas the day before and Alfonso posted on the lunch here. “One of the best meals of 2012,” Alfonso told me a voce. 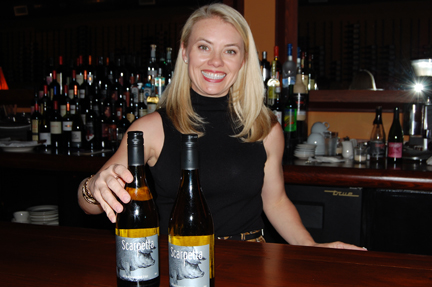 Our good friend April Collins, their Texas broker and one of the most beloved wine professionals in the state, did a superb job orchestrating the event. 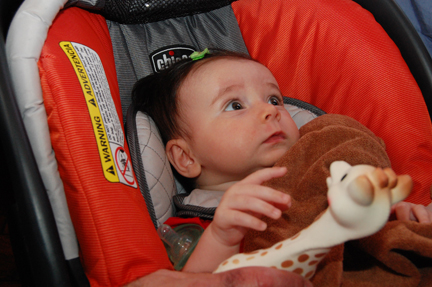 Georgia went to her first fancy wine tasting and luncheon! She was SO good and a lot of friends got to meet her for the first time. 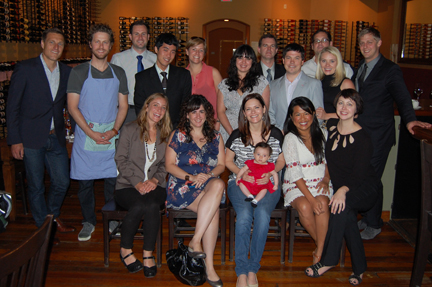 All of the top Austin wine professionals were there. We’re lucky to be part of such a close-knit wine community. 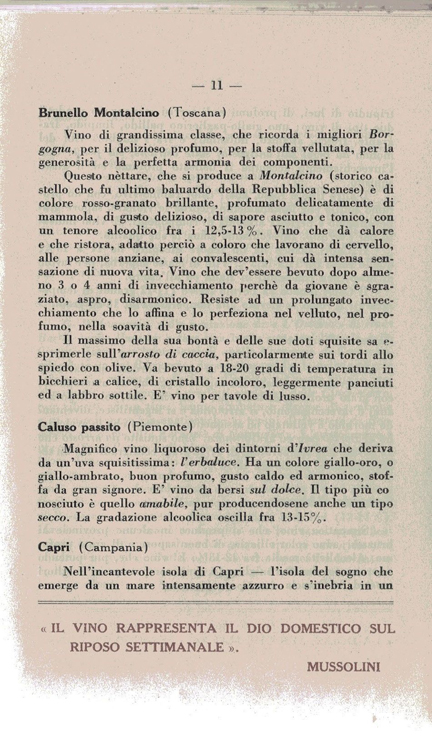 I was thrilled to read this translation of the entry for Brunello di Montalcino in a 1937 (fascist era) catalog for an exhibition of Italian wines in Siena by my friends at Tenuta Il Poggione.

The document offers us a window onto how Brunello was perceived in another era. In 1937, fascism was at its zenith and Mussolini had yet to adopt Hitler’s race laws (1938). It was a time filled with national pride for many Italians (members of the fascist party) and the exhibition of “typical Italian wines” in Siena that year was indicative of the spirit of italianità that gripped the Italian collective psyche.

Alessandro Bindocci, who posted the document and translation on his blog, neglected to translate the quote from Mussolini at the bottom of the page (btw, I asked Ale to send me hi-res versions of the document; click the images here to view), il vino rappresenta il dio domestico sul riposo settimanale: wine represents the domestic god of weekly rest.

The quote is significant for many reasons. But most importantly in my mind, it offers us a trace of how fine wine was considered a medicine with health-enhancing properties in the era before the Second World War.

Brunello di Montalcino, write the editors of the catalog, has an alcohol content of “12.5-13%” (!!!) and is recommended for “those who work with their brains, the elderly, and those recovering from illness. It will give the drinker a sensation of new life.” They even suggest that Brunello di Montalcino has a “tonic” (i.e., medicinal) flavor.

It’s a fascinating however short text and I highly recommend it to you.

I hope to consult the catalog when I visit Montalcino later this year. 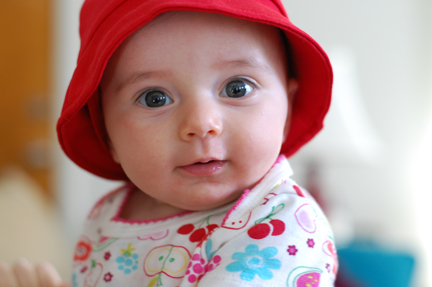 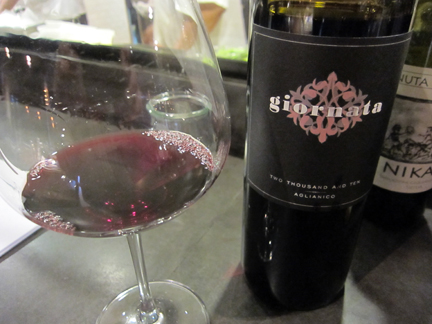 In 2008, when I attended the Unified Wine & Grape Symposium to hear my friend (and a man who has greatly inspired and informed my career) Darrell Corti deliver the keynote address at the meeting of the California Association of Winegrape Growers, he suggested that Aglianico could be an alternative to California’s ubiquitous Cabernet Sauvignon, noting that the Italian grape variety was better suited to California’s climate. (Here are my notes from his talk; I’ve written a lot about Darrell Corti here but this is my favorite post devoted to him.)

Darrell’s talk came to mind yesterday when sales rep and true wine connoisseur Tom Hunter of Revel Wines opened a bottle of Aglianico by the Giornata winery in Paso Robles.

In my view, the legacy of Cabernet Sauvignon and Chardonnay in California is the result of an epochal misunderstanding — a ripple of an “anxiety of influence,” to borrow a phrase from Bloom. A generation ago, when rich white men planted these grapes in Napa, they did so inspired by the wines that rich white men on the other side of the Atlantic drank and not with a mind to propagate varieties suited for the Napa Valley climate, topography, and subsoils.

Anyone who’s every visited Burgundy or Bordeaux will find little in common with the terroir of the Napa Valley floor, where these French grapes have been grown and vinified so famously for the last forty years.

In more recent memory, Central Coast growers have been inspired by the renaissance of Italian wines. I’ve tasted Nebbiolo, Barbera, Sangiovese, and even Teroldego grown there. And while the wines are sometimes good (and the intentions of the winemakers genuine), their efforts — in my view — are as misguided as those rich white men who came a generation before them.

I can’t conceal that I was skeptical when Tom pulled the Paso Robles Aglianico from his bag but my colleague Rory (with whom I co-curate the wine program at Sotto) and I were blown away by how good the wine was. And unlike the myriad bottlings of Barbera and Nebbiolo that seem to lose their varietal character in the California soil and sunshine, Giornata’s Aglianico tasted like Aglianico, delivering those dark fruit and earthy notes that I love in wines from Vulture, Taurasi, Taburno, and Cilento.

I loved the wine and I’m thrilled that we’re going to be pouring it by the glass at Sotto.

Posting from the plane on my way back to the Groover’s Paradise. Can’t wait to wrap these arms around those girls of mine! :) 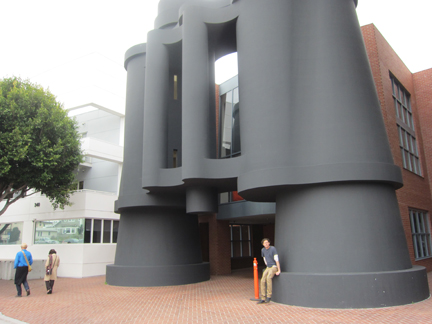 The new Google HQ in Venice. Funny thing is that those binoculars where already there… been there as long as I can remember from my UCLA days… 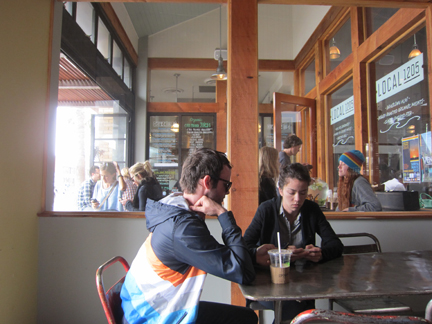 Met one of my oldest and best friends from La Jolla days Irwin at the Local 1205 on Abbot Kinney, fellow La Jollan Craig’s new market and eatery. 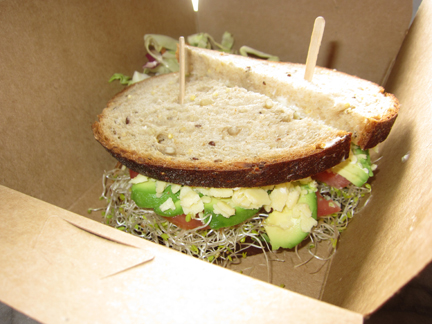 We had “La Jollans,” inspired by a little health food grocery from way back in the day on the corner of Nautilus and La Jolla Blvd. None of us can remember the name of the shop but we remember the avocados and the sprouts on the whole grain. 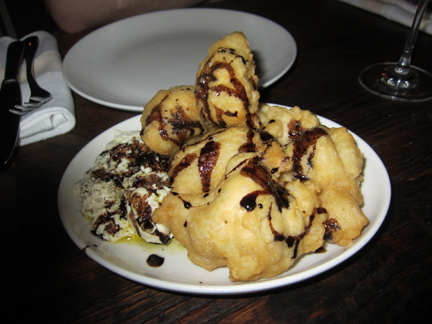 Had to start with the pittule (Pugliese fritters with vincotto and ricotta), paired with Donkey & Goat Sluicebox (pronounced PEE-too-leh, btw). 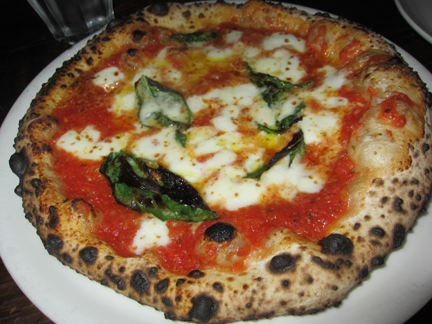 All things considered, I still think that pizzaiolo and chef Zach makes one of the best — if not the best — authentic Margherita in the U.S. 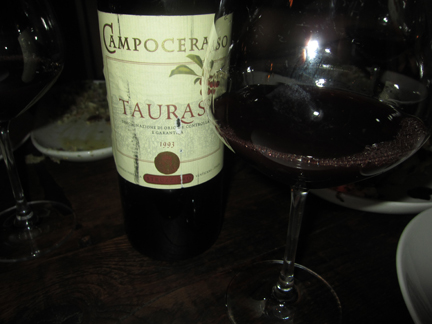 To celebrate the birthday of my good friend (and agent who just scored us the NN+ HBO Girls license) Michael, we opened a bottle of 1993 Struzziero Taurasi Campoceraso — unbelievable.

93 was a classic, balanced (as opposed to americana) vintage in Taurasi and is considered one of the greatest of the decade.

I was blown away by the bright acidity and brilliant fruit in this wine, tempered by the characteristic minerality and earthiness of botte-aged Aglianico. (The most hilarious tweet today, btw, by @JohnQBoxler: “I like big botti and i cannot lie.”)

Charles Sciolone would approve, no doubt.