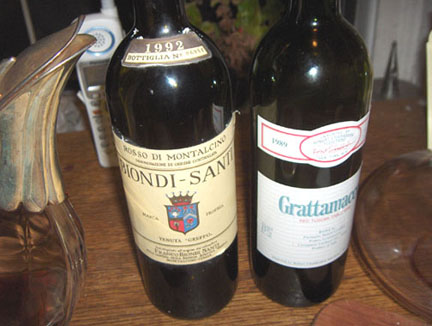 Above: Nous Non Plus in their own little Utopie in Québec City (photo by Emily Welsch).

Last night found Nous Non Plus in Québec City, where we dined at l’Utopie, a fine restaurant – as the fates would have it – smack dab next door to the club where we performed. Maître d’hôtel Frédéric and sommelier Bertrand graciously created a meal for us, pairing flavors and textures to the wines we had selected under their tutelage. (In another happy twist of fate, I would run into the two of them at a tasting in New York only a few days later!)

The first wine was a white: Costières de Nîmes 2003, a blend of Grenache Blanc and Roussanne. The latter, Bertrand told us, has been aged in large oak casks in order to achieve measured oxidation of the wine. As a result, the wine was rich in color and wonderfully aromatic. On one level the style struck me as completely modern: the wine was highly manipulated and some might say affected. At the same time, I thought about how he had used a very old technique (aging in large oak barrels where greater amounts of air cause the wine to "age" more quickly) to obtain the richness he wanted (in balance with the conventionally vinified Grenache). The wine was bold and drank more like a red than a white in its mouthfeel and finish. Fréderique paired it with Sea Scallops sprinkled to taste with aromatized fleur de sel.

The next wine was a Coteaux du Languedoc 2003, a 100% Carignan. The wine seemed to embrace the "biodynamique" approach that has become an overarching philosophy for French winemakers in recent years. The sturdy Carignan paired well with Nova Scotia stockfish served over grilled chestnut soup and mashed green cabbage and raisins.

While the star of the evening remained the Costières de Nîmes, the biggest treat for me was the St-Joseph 2003, a 100% Syrah. Many believe that Northern Rhône represents today the greatest value in fine and collectible wine and this wine was fantastic. I enjoyed it immensely with the macreuse, a lean cut of beef served over celeriac, foie gras, marrow, and armillaire mushrooms.

As Bertrand and Frédéric rocked on the dance floor at our show, I couldn’t help but think we had found a small utopia in Québec. The band played seventeen songs, including three encores, and we all slept very well that evening.