Here’s my post for the Houston Press on the dishes we like to prepare for Hannukah — the “olive oil festival” — and the wines we like to serve with them.

Can you think of a better festival for the state of Texas, where they fry nearly everything???!!!

Maybe it’s because she knew I was depressed by the flurry of bad news from Europe.

But it’s definitely because I’m the luckiest guy in the world: when Tracie P came home from work yesterday, she brought me a bottle of 2007 Barbaresco by Produttori del Barbaresco, which — believe it or not — I still hadn’t tasted.

However bizarre the 2007 vintage in Langa, everything I’ve tasted so far from Barbaresco and Barolo has been simply sensational. Here’s what one of my favorite wine writers, Antonio Galloni, had to say about this strange but glorious (imho) vintage:

The year started off with an unusually warm and dry winter, with virtually no precipitation. Flowers and plants went into bloom nearly a full month early. Growers had never seen conditions such as these. The summer was warm, but evenly so, without noticeable heat spikes. Towards the end of the growing season nighttime temperatures lowered, slowing down the maturation of the grapes, and allowing for the development of the perfume that is such an essential component of fine Nebbiolo. The harvest was earlier than normal, but the growing season started so early in the year that the actual length of the vegetative cycle was actually close to normal if not longer than normal by a few days.

At first kiss, the 2007 classic (as opposed to vineyard-designated) Barbaresco by Produttori del Barbaresco was very generous with its fruit. Arguably the most elegant bottling I’ve ever tasted from the winery that forms the centerpiece of our wine collection, the wine showed stunning balance before quickly closing up, with the muscular tannin dominating the wine in my glass for the rest of the evening (I’ve saved the great part of the wine in the bottle and will revisit it tonight and tomorrow night). If ever there were an expression of Barbaresco “Barolo-esque” in its power, this would be it: there was a delicate menthol note in the mouth that reminded us of some of our favorite “east-side,” “Helvetian” growers.

It’s too early for final judgment on this wine, but wow, my impression is that we have a lot to look forward to…

I also opened a bottle of Gianni Brunelli olive oil that Laura Brunelli gave me when I visited the family’s amazing farm in Montalcino in October.

A drizzle over some still warm toasted bread was unbelievably good, one of the mineral olive oils I’ve ever tasted. (When tasting olive oil, please be sure the olive oil is room temperature and always taste with warm bread; the gentle heat of the bread will prompt the oil to release its full flavor.) 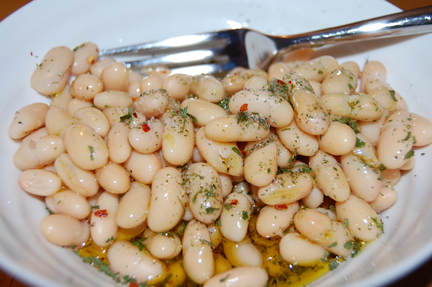 I used the oil to dress some fresh red leaf lettuce and some cannellini beans. Utterly and absolutely delicious.

Whereas Ligurian olive oil tends toward the fruity and Sicilian toward the spicy, great Tuscan olive oil leans toward salty: I added just a dash of kosher salt to both the salad and the beans and Laura’s oil imparted all the savoriness I needed to both dishes. Fantastic stuff… Enough to cheer a wine blogger up after a day of gloomy news from his adoptive country…

Stay tuned for a post on my visit with Laura, a tour of her amazing “biodynamic” house, and a tasting of some current and older vintages of her family’s incredible wines… one of the best tastings from my last trip to Italy… Thanks for reading! 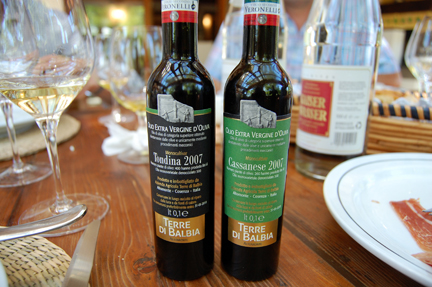 Friuli isn’t the first region that comes to mind when you think of great Italian-raised extra-virgin olive oil. In fact, very little olive oil is produced there (later in this series I will be posting on the tiny subzone of Friuli where higher winter temperatures make the cultivation of olive trees for fine olive oil possible).

“It’s just too cold here during the winter,” said the lovely Ornella Venica when we sat down for lunch at her family’s estate. Winter freezes, not uncommon in this most northeastern region of Italy, can kill the trees, she explained, making it virtually impossible for her family’s estate to produce fine olive oil there.

Determined to make great olive oil, her husband Gianni and one of his business partners launched the estate’s Terre di Balbia program in 2001 in Calabria, where they grow olives for their family’s olive oil and bottle estate-grown Magliocco and Gaglioppo.

The Venica family became early undersigners of Luigi’s Veronelli’s 2001 “Olive Oil Manifesto” (you can download a PDF version of the manifesto at the movement’s official website).

Publisher, writer, editor, and gourmet Luigi Veronelli, for those of you unfamiliar with his legacy, was the architect of Italy’s current food and wine renaissance. His early catalogs of the wines of Italy (first published in the early 1980s) and his restaurant and food guides reshaped the map of Italian food and wine, domestically and abroad (Veronelli appears often here at Do Bianchi, most recently in this post).

The manifesto is extensive and meticulous, but the basic concepts of l’olio secondo Veronelli (“oil according to Veronelli,” i.e., Veronelli’s “vision” of olive oil) can be distilled as follows: 1) no-chemical farming; 2) quick pressing of the fruit in situ 3) depittting of the olive oil before pressing; 4) exclusive pressing and bottling of individual cultivars, i.e., olive varieties (the section on how to clean the press to avoid cultivar contamination is impressive); 5) detailed labeling, including the mono-cultivar, “vintage,” and provenance; 6) exclusive packaging in glass bottles. There’s a lot more to it, but the basic concepts are these.

The oil? FANTASTIC… Venica & Venica is not the only producer-member of the Veronelli movement but I have been unable to find a comprehensive list of all the members.

In case you were wondering what we ate for lunch that day: roast pork shank with kren and fresh greens.

And we drank a 2005 Venica & Venica Refosco, which I had never had the opportunity to taste. Chewy and earthy and sooooooo good…

Venica and its current generation Giampaolo Venica will be appearing in an upcoming post in this series. Giampaolo was one of the most fascinating persons I met on the trip and we became fast friends. Stay tuned…

Above: Rock star importer Kermit Lynch is one of nearly every natural wine lover’s heros. Me? Guilty as charged. (Photo courtesy the SF Gate)

I cannot conceal my thrill that Kermit Lynch commented on my blog yesterday. In case you missed it, he wrote:

One of my favorite pairings is the Bandol rosé (Domaine de Terrebrune also makes a winner) with popcorn. No, not buttered popcorn. To really make the wine and popcorn work wonders, I use olive oil, salt, and dried thyme stirred into the popped corn. A hit of Provence.

Mr. Lynch, thank you for stopping by and thanks for reading.

I also heard from Clark Terry who works with Kermit. He contacted the “Beaune” office: roughly 5,000 cases of Bandol Rosé are released by Tempier each year. I’m glad that a few of them make to Austin so that me and Tracie B can enjoy our Bandol with our Idol! Next week, we’ll have to try Kermit’s popcorn…