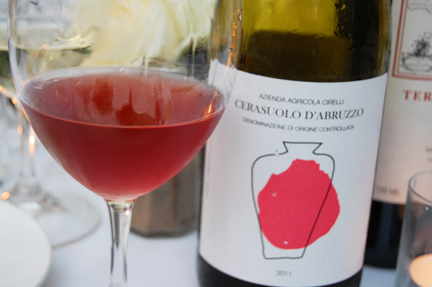 Such was the case yesterday early evening when I opened a bottle of Francesco Cirelli’s amphora-aged Cerasuolo d’Abruzzo for some of our best friends. I’ll never forget the moment when I poured it into the glass and the whole table collectively sighed…

Beyond its hue, Francesco’s wine achieves a benchmark balance of savory and sweet and its mouthfeel and finish are toe-curling.

It could possibly be my favorite wine for 2012, almost as good as sex.

Earlier this year, I asked Francesco to pose for my video camera and pronounce Cerasuolo d’Abruzzo for the Italian Grape Name and Appellation Pronunciation Project (see below). And I’m extremely proud and thrilled that we will be debuting the wine this week on my fall list at Sotto in Los Angeles (I’ll be at the restaurant tonight and tomorrow).

From the department of “keeping the world safe for Italian wine”…

Yesterday, Fabien Jacob, a good friend and one of the top wine professionals in San Antonio, sent me the following message via the Facebook.

“I need your help,” he wrote. “Have you ever encounter corks that are glazed and turned yellow at the bottom of it? This is happening with a wine from Abruzzo, the wine itself is not bad or faulty but the cork is very fragile and became glazed and yellow. Any help would be appreciated. Thank you.”

Nonplussed by the mysterious case of the yellowed corks, I asked Fabien to send me a photo (click the image above to enlarge) and then reached out to Giovanni, who swiftly answered (and I have translated here):

It’s a silicon film that is applied to the top of the closures in order to stop the wine from coming into direct contact with the cork. It helps to ensure that the wine isn’t affected by cork taint.

It has been applied to both the top and the bottom of the cork. In this case, it has yellowed because the bottle contains [wine made from] Montepulciano [grapes] or similar, a grape variety that that has a strong tendency to tinge. The film has been applied to the top as well but it’s still transparent.

Tonight I’m giving a seminar on social media and wine for the San Diego association of women wine professionals. I can’t think of a better example of how social media makes the wine world a better place.

If Merlot (mehr-LOH) is the easiest European grape name for Anglophone consumers to pronounce (and is consequently America’s favorite variety), then Montepulciano (MOH-te-pool-CHEE’AH-noh) is the most confusing and one of the most challenging.

The last time you were on a date and you wanted to impress your dinner companion, did you impress him/her by ordering the Vino Nobile di Montepulciano (VEE-noh NOH-bee-leh dee MOHN-teh-pool-CHEE’AH-noh)? Or perhaps you eloquently illustrated how Montepulciano is at once a place name (the name of a township in Tuscany where Vino Nobile di Montepulciano is produced) and a grape name (the name of a variety grown and vinified primarily in Abruzzo but also elsewhere in Central Italy)?

I know that you didn’t order the Merlot!

Above: Dino Illuminati, Stefano’s father and the winery’s namesake, is one of the wonderful avuncular characters of the Italian wine world — larger than life and always bursting with life and energy. His 1998 Montepulciano d’Abruzzo blew me away when I tasted it a few months ago in Chicago (photo by Alfonso, Verona, April 2011).

The bivalence of the topo- and ampelonym Montepulciano often leads complacent wine directors to include bottlings of Montepulciano d’Abruzzo in their “Tuscany” and “Sangiovese” sections. This oversight often tragically eclipses the many wonderful expressions of Montepulciano that come from Abruzzo (anyone who has ever tasted the 1979 Montepulciano by Emidio Pepe knows just how incredible these wines can be!).

Do Bianchi isn’t exactly the blogosphere’s leading resource for dating advice. But, then again, Tracie P probably wouldn’t have given me the time of day if I didn’t know the difference between my Montepulciano d’Abruzzo and my Vino Nobile di Montepulciano!

You might remember my post White, Green, and Red All Over: Obama to eat patriotic pasta at G8 from a month ago. The G8 summit began today in L’Aquila in Abruzzo and the Italian press is relishing the Obamas’s every move with great gusto.

As Franco pointed out today at Vino al Vino, there was even a post today at the ANSA (National Italian Press Association Agency) site that includes not only the official schedule for today but also the official bottles of wine and spirits to be given to Italy’s “illustrious” guests. G8 members will receive a “magnum of Amarone Aneri 2003 in a wooden box on which the initials of each of the presidents or prime ministers present has been engraved. All official lunches will begin with a toast with Ferrari spumante, [a wine] which is never missing at great appointments with history [sic; can you believe that?]. As an official gift for the illustrious guests, a highly rare ‘Ferrari Perle’ Nerò has been chosen [sic; the wine is actually called Perlé Nero], together with ‘Solera’ Grappa by the Segnana distillery. 1-3 p.m.: working G8 lunch on global economy.” (The post at ANSA’s English-language site did not include the wines or plugs.)

The American press doesn’t seem to be taking the G8 Summit and Silvio Berlusconi’s carefully choreographed hospitality as seriously as the Italian press corps. “Inexcusably lax planning by the host government, Italy, and the political weakness of many of the leaders attending, leave little room for optimism,” wrote the editors of The New York Times today.

With more humble tone, I was forwarded an email from the Dino Illuminati winery announcing that one of its wines had been chosen as the official wine for the luncheon and another for the closing dinner tomorrow. “We are sure You’ll like to enjoy,” it read, “the very good news with us: Our wine ZANNA Montepulciano d’Abruzzo Colline Teramane DOCG 2006 has been choiced as official red wine for the G 8 lunch of Wednesday July, 08. Besides, our wine LORE’ ‘Muffa Nobile’ will be the dessert wine for the G 8 dinner of Thursday July, 09.”

Check out our post today at VinoWire: Barbaresco producers speak out on Giacosa’s decision not to bottle his 2006. Giacosa claims that the rains of September ruined the vintage but our post reveals other points of view.

This post is the second installment of Saignée’s 31 Days of Natural Wine. Click the link below for more…

“Natural wine” is something of a misnomer. Wine is, after all, an act of humankind.

It’s true that wine occurs naturally. Aleš Kristančič of Movia once explained to me how when a grape falls from the vine, it is a natural winemaking vessel: the hole at the top of the berry (where the stem has broken away) is a natural valve that allows yeast on the skin to enter the berry and begin turning the sugar into alcohol.

Wine was a gift from the gods (think Bacchus), or a gift of G-d (think Noah), or an accident (think mother Natura), depending on how you look at it: the magic of grape juice being turned into wine was probably discovered by someone who forgot some grapes in an amphora, only to open the vessel later and find that they had been turned into wine (the original carbonic maceration). But the moment that someone employed this stumbled-upon technology (tehnê, meaning art or craft) a second time, it became an act of humankind…

Dany the Red is now Dany the Green. Remember this post from East Germany back in September 2008? That’s me stage left, above, rocking out with Daniel Cohn-Bendit, who was in the news today and whose “Europe Écologie coalition of European Green parties came in third in French voting for the [European] Parliament, winning 16.28 percent of the vote. It was just behind the squabbling Socialists, who had only 16.48 percent, and ahead of a presumptive presidential candidate, François Bayrou of the centrist Democratic Movement, or Modem.” Check out this article in the Times. I love how the girl in the photo above is wearing a bright red outfit.

By now you should know the identity of the mystery girl to whom I threw the kiss!

Historically and traditionally, Tuscany is one of Italy’s “red” states. And “red” in this case, does not denote “republican” but rather “communist.” (Emilia-Romagna is Italy’s other traditionally “red” region.)

So it came as something of a surprise to many when Montalcino residents draped their village with the following slogan on the occasion of Agricutlure minister Luca Zaia’s press conference last month, where he announced the “resolution” of the Brunello crisis: “Thank you Northern League, thank you minister Zaia.” That’s Zaia, pictured left, in his “I saved Brunello” press photo. Note the green pocket square — a symbol of the Northern League — and his black tie, a powerful and ideologically charged statement in a region where many still remember the thuggery of Mussolini’s camicie nere or black shirts.

Italy’s separatist Northern League is a secessionist, xenophobic political movement, led by anti-Italian, racist Umberto Bossi. Bossi, pictured left, recently caused a furor in Italy when he began flipping off the Italian national anthem. He has also said he believes the Italian flag should be used as toilet paper. The humor in the video below may be lost on some of you who don’t speak Italian but watch it anyway. You’ll notice Zaia in the front row at one of Bossi’s speeches. The Lega is part of prime minister Silvio Berlusconi’s current center-right coalition and when Berlusconi returned to power in May 2008, he made Zaia agricultural minister (no doubt, payback to the Lega for its support).

In nearly every one of Zaia’s press releases and statements on the Brunello controversy, he has been quick to accuse Italy’s center-left coalition, led by Romano Prodi, of inaction and ultimately has laid blame on his predecessor for the current crisis (whereby a local investigation of Brunello producers suspected of adulterating their wines has led to a U.S. block of imports from Montalcino).

So it must have come as a great surprise to Montalcino’s neighbors up in Montepulciano when they learned Friday that the U.S. Alcohol Tobacco Tax and Trade Bureau has now blocked imports of Vino Nobile di Montepulciano. According to a report published by my friend Mitch Frank over at The Wine Spectator, the TTB made the move after receiving no response to requests for information on the current investigation of Vino Nobile producers (who are also suspected of adulterating their wine).

In the meantime, Zaia has been working to improve perception of Italian wine abroad by authorizing the bag-in-box packaging of DOC wine. I guess he thinks that Sangiovese will be easier to market in a box. He just needs to remember to open the mail from America first…

Italian Wine Guy did this fantastic post on Zaia in July. I only wish Zaia could speak English well enough to understand the paronomastic parody!

I’m not a fan of Wikipedia but this entry on the Lega Nord is informative.