Once again, I feel compelled to direct your attention to a superb and extraordinary post by Levi Dalton — the “dude of dudes of wine blogging.”

In it, the Philip Marlowe of the international wine scene visits the Romano Levi distillery in Piedmont.

Conversation over lunch in the home of the Nonino family (the first family of Italian distillation) ranged from encounters with Marcello Mastroianni, Claude Lévi-Strauss, and Luigi Veronelli to the (literal) renaissance of native grape varieties in Friuli. I was THRILLED to be invited for lunch in their home, a fascinating family with a fascinating history. That’s daughter Cristina and father Benito above. They served an aperitif of Amaro Nonino on the rocks with a slice of blood orange.

There’s so much to tell about our confabulatio and there will be time for that… in the meantime, the bean and potato soup — with barley, chestnuts, and bits of melt-in-your mouth bacon fat, drizzled with olive oil and sprinkled with freshly cracked pepper — was an amazing confluence of flavors and textures. A rustic, powerfully sensuous dish… 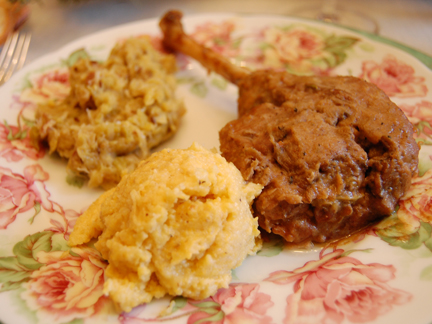 Stewed goose thigh was o so tender and delicious with polenta and cabbage. Benito thanked us for coming, noting that they feed him better when there are guests. They’re a very colorful bunch and the hours we spent together were literally marvelous.

Late last year, when I was asked to contribute to a collection of essays dedicated to and inspired by my UCLA dissertation advisor, mentor, and friend, poet, scholar, gourmet, and gourmand, Luigi Ballerini (above), I decided to chronicle the Italian food scene in Los Angeles circa 1994. The Italian regional cuisine phenomenon had yet to explode in the U.S. but the City of the Angels was already awash in a sea of grappa: with Bloomian anxiety of influence, Angelino restaurateurs had embraced two of Italy’s most humble (however beloved) food stuffs — polenta and grappa — and anointed them as queen mother and queen (respectively) of Italian cuisine.

At the time, Luigi and I were working on a wonderful translation of his poetry that would become Cadence of a Neighboring Tribe. And Luigi was just beginning to shift his focus to gastronomy. Among many other articles, translations, and essays, our collaboration led to an English-language annotated edition of The Art of Cooking by fifteenth-century Italian celebrity chef Maestro Martino (UC Press 2005) — one of my most proud moments as a scholar and translator.

Three of the most powerful and enduring memories of my years working closely with Luigi Ballerini involve food (and/or the lack thereof).

The one is an image in his mind’s eye, a scene he often spoke of: Milan, 1945, the then five-year-old Ballerini watches a defiant Nazi soldier atop an armored car, part of a phalanx in retreat from the Lombard capital, leaving it an “open city”; the muscle-bound German bares his chest in the winter cold, as if impervious to pain even in the moment of ultimate defeat. The Nazis left behind a broken city and people, who had already known hunger for quite some time and would not know prosperity and plenty for many years to come. At five years old, Luigi knew hunger all too well.

O, Luigi, you can be the king and you most certainly are in my cook book. But may we wear your crown?

You might remember my post White, Green, and Red All Over: Obama to eat patriotic pasta at G8 from a month ago. The G8 summit began today in L’Aquila in Abruzzo and the Italian press is relishing the Obamas’s every move with great gusto.

As Franco pointed out today at Vino al Vino, there was even a post today at the ANSA (National Italian Press Association Agency) site that includes not only the official schedule for today but also the official bottles of wine and spirits to be given to Italy’s “illustrious” guests. G8 members will receive a “magnum of Amarone Aneri 2003 in a wooden box on which the initials of each of the presidents or prime ministers present has been engraved. All official lunches will begin with a toast with Ferrari spumante, [a wine] which is never missing at great appointments with history [sic; can you believe that?]. As an official gift for the illustrious guests, a highly rare ‘Ferrari Perle’ Nerò has been chosen [sic; the wine is actually called Perlé Nero], together with ‘Solera’ Grappa by the Segnana distillery. 1-3 p.m.: working G8 lunch on global economy.” (The post at ANSA’s English-language site did not include the wines or plugs.)

The American press doesn’t seem to be taking the G8 Summit and Silvio Berlusconi’s carefully choreographed hospitality as seriously as the Italian press corps. “Inexcusably lax planning by the host government, Italy, and the political weakness of many of the leaders attending, leave little room for optimism,” wrote the editors of The New York Times today.

With more humble tone, I was forwarded an email from the Dino Illuminati winery announcing that one of its wines had been chosen as the official wine for the luncheon and another for the closing dinner tomorrow. “We are sure You’ll like to enjoy,” it read, “the very good news with us: Our wine ZANNA Montepulciano d’Abruzzo Colline Teramane DOCG 2006 has been choiced as official red wine for the G 8 lunch of Wednesday July, 08. Besides, our wine LORE’ ‘Muffa Nobile’ will be the dessert wine for the G 8 dinner of Thursday July, 09.”

Check out our post today at VinoWire: Barbaresco producers speak out on Giacosa’s decision not to bottle his 2006. Giacosa claims that the rains of September ruined the vintage but our post reveals other points of view.

I’m the one with no hair obviously. The other person is Mr. Shanon @romahtx :) ❤️