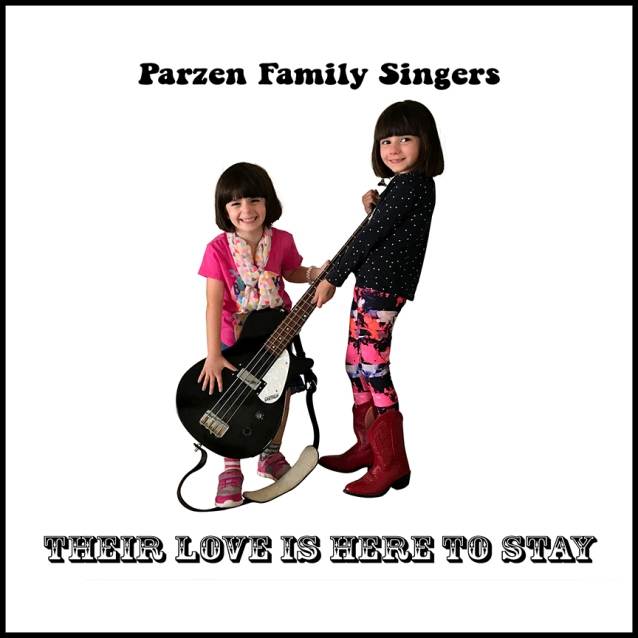 Happy holidays, everyone! We hope you enjoy the new album from the Parzen Family Singers, “Their Love Is Here to Stay”!

Many of the songs on this album were inspired by our girls, Lila Jane age 5 and Georgia almost 7. Over the course of the year, they challenged me to write songs about them and their lives.

The lead track, “Safety Song,” came about when Lila Jane asked me to compose a song about, well, “safety,” something we spend a lot of time talking about at our house.

Georgia makes an appearance on vocals on “Minivan,” another one they asked for (although now they are more excited about our F150 than our Odyssey).

“Sonny,” the album’s only instrumental, is about one of their stuffed animals.

Sonny the Cheetah makes another appearance in “We Are The Bunnaroos,” a song about their make-believe rock band (inspired by “Josie And The Pussycats” and [Paul Collins’] The Beat).

“(This Is Called The) Go Rusty,” a track about our new dog, was co-written by Lila Jane who performs vocals.

“Welcome To The S—hole” is self-explanatory (rock ‘n’ roll is one of the best antidotes to Trump and his racism brand).

“Taking A Bath” was another song challenge from the girls. We wrote it together as I strummed a guitar and they played in the tub. It’s my homage to Randy Newman.

“ABCs” is the album’s only cover, performed by Lila Jane.

“At The Museum” was inspired by our visits to Houston’s excellent Museum of Fine Arts. It’s testament to the old adage that you can write a song about anything under the sun. I’m really proud of the lyrics on this one (and all the while in the café/the milk is steaming/sipping cappuccinos and dreaming).

The title track, “Their Love Is Here To Stay,” was written after white supremacists sent an anonymous defamatory letter about me to Tracie’s 97-year-old grandmother “memaw” (the folks back home/they say she’s crazy/to love a spirit such as he/she’s been around the world that lady/nobody knows her mind but she).

Thanks for downloading and listening (any proceeds from pay-what-you-want sales will go to our efforts to repurpose the newly constructed Confederate memorial in Tracie’s hometown, Orange, Texas).

Happy Thanksgiving and happy holidays, everyone!