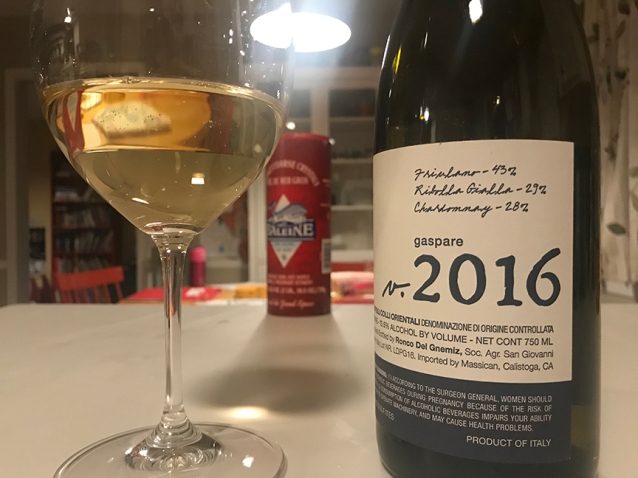 Just before the Thanksgiving holiday, American winemaker Dan Petroski, founder and owner of the California-based Massican winery, generously sent me a bottle of his latest label, Gaspare.

Named after the father of a schoolmate who nudged Dan toward his first winery job in Italy, it’s a 2016 blend of Tocai Friulano, Ribolla Gialla, and Chardonnay. But unlike Dan’s celebrated Friuli-inspired northern Californian whites, the fruit for this wine was grown in the Colli Orientali del Friuli by his friends Serena Palazzolo and Christian Patat whose Ronco del Gnemiz (Gnemiz Hill) winery is one of the most renowned in the appellation.

The wine is thoroughly delicious, richer in style than Serena and Christian’s signature wines, perhaps more reminiscent of Borgo del Tiglio in terms of body and weight than the lean, laser-focused monovarietal bottlings from Ronco del Genmiz. The aromatic character of the Tocai prevails while the Chardonnay seems to impart muscular elegance to this age-worthy (imho) bottle.

But the thing that really struck me about it was its trans-national character. And even more impressive, in my view, its “anxiety of influence,” to borrow Bloom’s phrase.

Here’s a critically acclaimed and admired American winemaker whose aesthetic has been shaped by his contact with Friulian white wines. Like a Dante emulating his guide Virgil, he has applied his experience in and passion for Italy using Friulian grape varieties grown in Californian soil. But now he’s come back to Italy, full circle, in a peripeteia that precedes a glorious reckoning, a resolution of sorts between that which inspires and the inspiration itself.

The Oedipal connotation is profound. In today’s world of new- and old-world contamination, where European winemakers react to and emulate American sensibilities and American winemakers (like Petroski) emulate and react to their European counterparts’ sensibilities, the Massican Colli Orientali del Friuli Bianco represents a sort of Jungian lysis. Or should I say autolysis?

Great stuff and thanks, Dan, for sharing it with Tracie and me (she loved it, too).