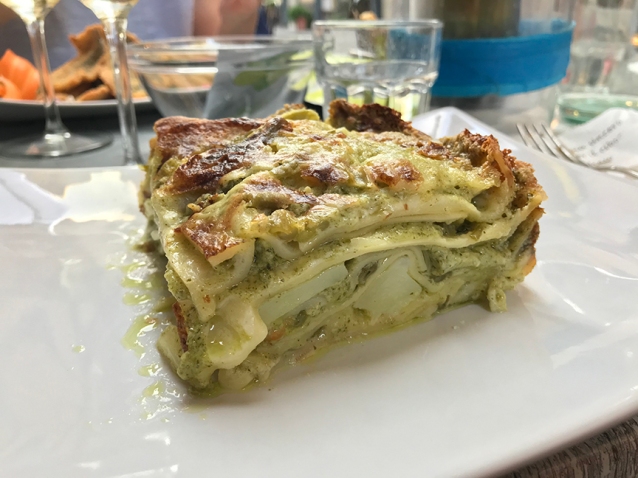 Over the weekend a pseudo-pesto was prepared and served over bucatini in the Parzen home.

The Parzen family pesto recipe is delicious. But it’s a mere riff on the traditional recipe, hence the qualifier “pseudo” (we don’t use pecorino and the Parmigiano-Reggiano we use isn’t aged; you could call it a “pan-Italian” pesto, typical of the pesto you’ll find in major cities beyond the Ligurian coast).

It reminded me of the mouthwatering pesto the Parzen family ate during a weekend in Liguria this summer along the Italian coast in Finale Ligure (nearly all of our Italian friends poo-poo’d our beach destination, writing it off as too “1960s,” kitschy, and passé; but we loved it).

Those are lasagne al pesto in the photo above (yes, it’s plural in Italian and thus it’s appropriate to refer to it in the plural in English as well; a lasagna is a sheet of pasta, plural lasagne).

Note the potatoes among the layered pasta sheets.

Tracie had trenette that night with pesto. Both dishes were thoroughly enjoyed but neither compared to the focaccia topped with pesto that we discovered at Il Tuo Amico Pane, a bakery and gourmet shop whose name can be translated as “Your Friend Bread.”

Liguria is renowned for its superb, deeply golden-colored extra-virgin olive oil. Some would even contend that Italy’s best olive oil is produced there

Made primarily from Taggiasca olives (named after the township of Taggia, also known in English as Cailletier olives), the oil is famous for its almond and pine nut character. The taggiasca cultivar is smaller than most and its stones are relatively large. This makes it unappealing to commercial producers of olive oil who seek greater yield. But it remains a gold standard (excuse the pun) among top olive millers.

Ligurian oil is a central ingredient in pesto. And it’s also a key element in focaccia genovese, Genoa-style focaccia. In Liguria, the flatbread is basted with rich olive oil and sprinkled with sea salt. As you can imagine, it’s literally finger-licking good.

And one of the coolest things about focaccia genovese (at least for me, lover of savory as opposed to sweet breakfast) is that the Ligurians eat it in the morning for breakfast with their coffee. As a matter of fact, they seem to eat it at all times of day (which is fine by me).

No user-generated content research went into our decision to frequent Il Tuo Amico Pane. We simply scouted around until we found the focacceria with the longest line.

The focaccia slathered with pesto was sublime, hands down the best pesto we ate during our 36 hours in Liguria. I wish I would have taken a photo of it but my hands were otherwise covered in olive oil and sea sand (we used Vittoria Beach for our beach set up; it was great).

Finale Ligure may not be the sexiest beach destination among Italy’s hipster crowd. But man, it sure hit the spot.

One thought on ““Your Friend Bread”: notes from Liguria, the spiritual homeland of pesto and focaccia”