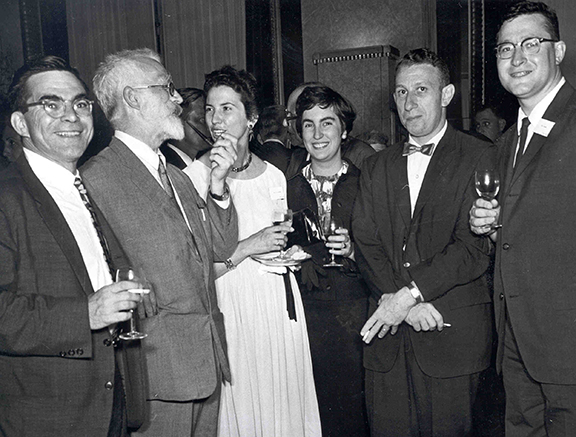 Above, from left: Sam Greenhouse, Sir Ronald A. Fisher, unknown, Carol Parzen, Ingram Olkin, and Emanuel Parzen (my great uncle) in 1961 at the meeting of the International Statistical Institute in Paris (image via ProjectEuclid.org).

My father’s father died when my father was very young.

My paternal grandmother, née Levy, was remarried soon thereafter to Rabbi Maurice Parzen, whose family had immigrated from Łódź in what is now Poland (I believe that the family name comes from the village of Parzeń in current-day Poland).

The Rabbi’s brothers included Ben Parzen, who would become one of the world’s leading electrical engineers and inventor of an oscillator that could withstand the electromagnetic pulse of a nuclear fallout (his greatest invention, among many others). He died in 2005.

The Rabbi’s youngest brother was Emanuel “Manny” Parzen, a world-renowned statistician and pioneer in kernel density estimation, a field which is often referred to as “the Parzen Window” in his honor.

Uncle Manny died on Saturday, February 6 in Florida where he lived with his wife and my aunt Carol.

An obituary was posted by Texas A & M university, where he taught for many years.

When I moved to Austin in 2008, Carol and Manny were still living in College Station, Texas and we visited occasionally.

And while I lived in New York from 1997 to 2008, I saw them frequently because they came to the city often.

Although we weren’t related by blood, Carol and Manny always treated me like a close relative and we would attend services together at B’nai Jeshurun on the Upper West Side when they visited the east coast. He loved the fact that they had a band playing in the shul on the Sabbath and that you literally could dance in the aisles as you sang the praises of G-d.

As my cousin Julia Parzen wrote me the other day, “Manny was wonderful at connecting family.” He always made a point of involving me in whatever he was doing in the city and I still stay in touch with many members of my extended family thanks to the connections he made during my New York years.

He was also a fresser, as they say in Jewish. He loved to eat at Indian restaurants in New York and Carol used to tease him that he was the only one of the Parzen brothers who loved eating so much because he was the only one who hadn’t been raised in a kosher household (for the record, Rabbi Parzen loved his desserts, one of my earliest memories of childhood).

Manny was a lovely, lovely man and he always shared a kind word and genuine concern for our family’s well-being.

He was also very funny. I remember once that he had bought dreidels for Georgia P and Lila Jane but he was worried that they might be defective because statistically, their results didn’t align with the stochastic (i.e., random) processes in probability that he had helped to develop. It turned out one of the dreidels was lopsided.

I’m so glad that I got to know him as an adult and that Tracie P got to meet him.

I will miss him and I know that my life is richer because he is part of it.