The most remarkable thing happened last weekend: my friend and Polish blogging colleague Andrzej Daszkiewicz — wine writer and author of a number of Polish-language wine blogs — snapped some photos as he passed through the village of Parzeń and sent them to me.

Like many Jews of Eastern European descent, my surname comes from a toponym, in this case Parzen, which at one time was most likely home to a shtetl. The name Parzen came to our family after my biological paternal grandfather died and my paternal grandmother married Rabbi Maurice Parzen in South Bend, IN. The Rabbi, who passed away when I was still a child, is survived by my great uncle Manny Parzen, his youngest brother, famous in his own right for his research in the field of statistics. The Parzens were from Lodz (Łódź) and they came to the U.S. in the first decade of the last century. 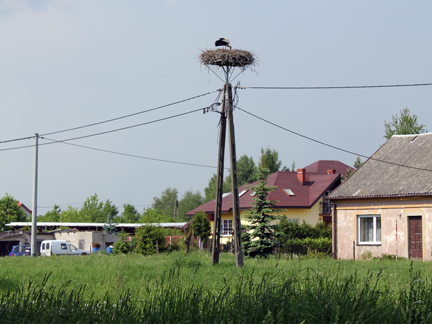 Here’s what Andrzej — to whom I am eternally grateful — had to report:

Two older houses there have their roofs covered with asbestos, which used to be very popular (because very cheap) material for that. Now it’s almost gone, but in some places you can still see it, as here.

This village is located at one of the roads I could take driving from Warsaw, where I live now, to Toruń, where I used to live and drink wine and still have many wine drinking friends. We had a friend’s birthday party on Friday, and on Saturday I took that road driving back to Warsaw (usually I take a bit faster, but much less scenic one)…

It is a small village now, with several rather isolated farms and no typical village center, no church (at least I could not see any). Two neighboring villages are much bigger, more typical ones. It is so small that there is no speed limit stricter than the regular highway one (around 55 mph).

Parzeń is about 15 km from a quite big (for Polish standards at least) city Płock, and around 120 km from Warsaw.

Just this morning, Tracie P said to me, after she finished a business call, “Well, I’ve certainly gotten used to my new last name.” It’s incredible to think that our family name — the name our children will have — comes from so far away from Austin, Texas.

A heartfelt thanks, once again, to Andrzej for the fraternity and the friendship, and this wonderful virtual window into the origins of our family.

2 thoughts on “The village of Parzen (Parzeń)”