In June of 1997, one month short of my 30th birthday and the month I completed my graduate studies in Italian at U.C.L.A., I began to experience moderate discomfort and noticeable swelling in my groin (I’ll leave the description of my symptoms at that; apologies for the TMI).

As a full-fellowship student, teaching associate, and research assistant at the Department of Italian, I had decent — however bureaucratically challenged — health insurance.

With my mind racing at a thousand miles an hour imagining all the worst-possible outcomes of my pathology, I hastily made an appointment at the student health clinic.

The student doctor who examined me was quick to diagnose me with Chlamydia, a sexually transmitted disease commonly found among sexually active university students.

She referred me to the school’s men’s health clinic.

But there was a problem: I wasn’t able to get an appointment at the clinic until after the end of the academic year and as a result I wouldn’t have been covered by my university health insurance at that point nor would I be eligible to access the service.

By mid-July, I had celebrated my 30th birthday and was rooming at my then single older brother’s house in La Jolla (in exchange for cooking and cleaning). Every day, I used public transportation to commute to the research library at U.C.S.D. where my goal was to complete my dissertation by summer’s end.

My symptoms hadn’t become markedly worse but they hadn’t gone away. With no income and little savings (typical of a grad student), I couldn’t afford the gap insurance (Cobra) for which I was eligible and I could scarcely afford the deductible payment that would have come with the temporary coverage.

And so I made an appointment at Planned Parenthood on Thomas Ave. in Pacific Beach.

The clinician there prescribed and supplied me with antibiotics at a nominal charge (around $25, if I remember correctly).

By the end of the summer, I filed my dissertation, received my Ph.D., and left California for New York City, where I had landed my first post-grad job (not in academia but in rolling stock; yes, trains, but that’s a story for another time).

My health insurance kicked in right away and with great celerity, I made an appointment to see a doctor in midtown who, after a brief physical examination, told me that, in fact, I didn’t have Chlamydia. I had a congenital hernia, he said. It wasn’t severe and wouldn’t affect my health in the short-term but it needed to be operated.

A month or so later, they operated on me at the New York University medical center and I recovered just fine. I didn’t have to pay a penny thanks to my coverage and just a few months later I had landed my first desk job as an editor at La cucina italiana (the English-language version of the Italian masthead).

Yesterday, when I read that one of the victims at the Planned Parenthood shooting on Friday in Colorado was a 29-year-old man, a veteran of the war in Iraq, the memory of my visit to Planned Parenthood in San Diego flooded my mind. I was the same age as him and like him, I was transitioning from one chapter of my life to another.

Today, as a 48-year-old father of two, an avid supporter of women’s reproductive rights and the right of access to reproductive health care, a resident of a state that has severely restricted those rights, and a supporter of stricter gun laws (who lives in a state where it will become legal to carry a handgun openly next month), I wonder what life will be like here for the microtexans (ages 2 and nearly 4) Tracie P and I are raising when they reach their teens.

Nearly a decade will pass before Tracie and I will be prompted to explain to our daughters what Planned Parenthood is and the role that it plays in civil society. But I hope that, should they need it, they will have access to affordable reproductive health care — even if they are financially challenged (something I don’t hope or foresee for them but a concern nonetheless).

Had the Affordable Care Act been in place when I was a graduate student, I may have never found myself visiting Planned Parenthood. But I’m sure glad that it was there for me when I needed it (although it turned out I didn’t really need it at all).

Had I had Chlamydia and had it gone untreated (because of a lack of access to reproductive health care), my fertility could have been impacted and it’s possible that I wouldn’t have been able to become a father.

When we finished decorating our Christmas tree yesterday afternoon before hosting a family party for our cousins, Georgia P (our oldest) asked Lila Jane to give her hug and “do Christmas together.”

I can’t imagine life here — or anywhere — without them. 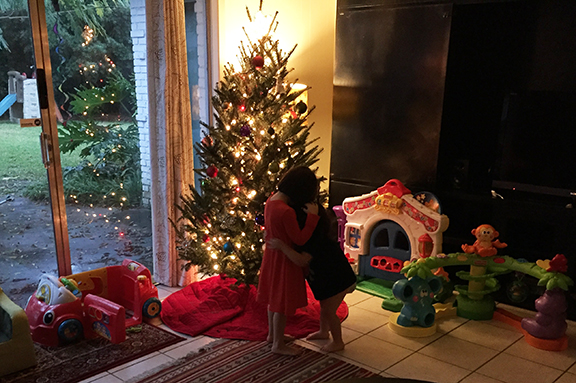 5 thoughts on “My planned parenthood (with a lowercase p)”