Today’s post is the first in a series devoted to my recent trip to Italy, the wines I tasted, foods I ate, and people I met. 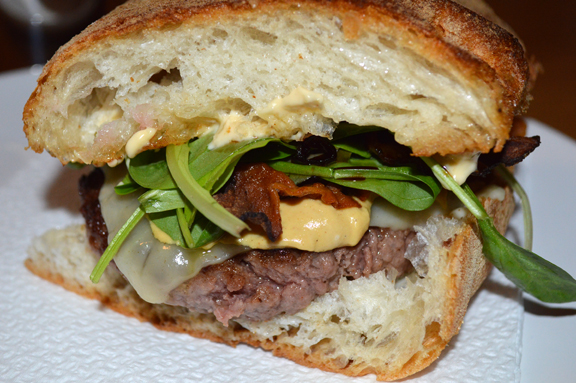 Above: Arianna Vianelli’s “All-Italian Bacon Cheeseburger,” a masterwork by any international standard.

Italy’s current love affair with the hamburger shouldn’t be surprising to Italian food and wine cognoscenti.

After all, think of how many pillars of Italian gastronomy have been borrowed and adapted from other cultures and places.

Tomatoes, corn meal, and potatoes: all of these foods came from the New World. Can you imagine an Italy without spaghetti al pomodoro, polenta, and gnocchi di patate? 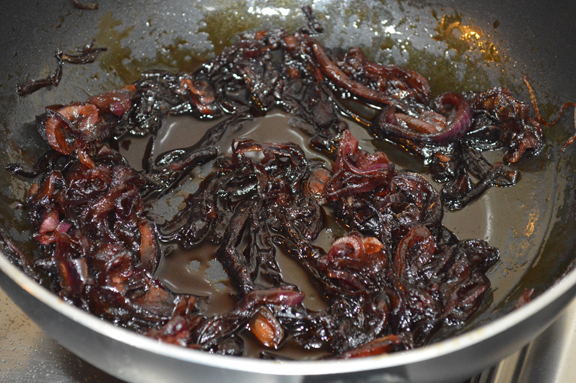 Above: not just any onions but EU-designated cipolle rosse di Tropea from Calabria. Arianna sautéed them with aromatized balsamic vinegar.

Anyone who’s read the footnotes to Pellegrino Artusi’s late nineteenth-century landmark tome La scienza in cucina e l’arte di mangiare bene (The Science of Cooking and the Art of Eating Well) knows that eggplant, a transplant from the Middle East, was just beginning to catch on at the time.

Where would pan-Italian cooking be without melanzane alla parmigiana? 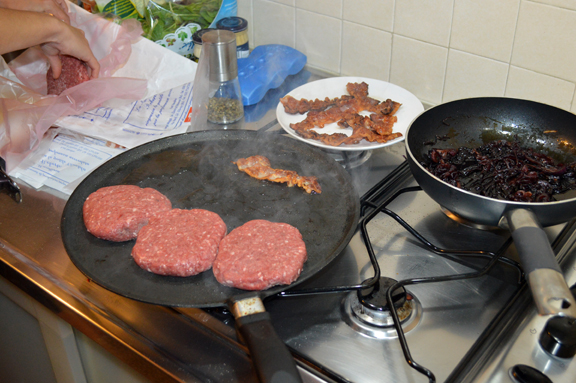 Above: Arianna explained to me that Italian butchers have begun to slice pancetta the way that bacon is sliced in the U.S. The curing process hasn’t changed. Only the way it’s sliced has.

And when the food scholar looks more closely at pasta — the crown jewel and sine qua non of Italian cookery — she/he learns that the Italians learned how to make dried pasta from their Arab neighbors. At the zenith of Arab culture during the Middle Ages, when Holy Roman Emperor and King of Sicily Frederick II invited Arab mathematicians and philosophers to his court, it’s very likely that they also brought with them techniques for drying pasta in the “August moonlight,” as Maestro Martino wrote in his Libro de arte coquinaria (The Art of Cooking, probably composed around 1450).

Where would the world be today without pastasciutta? 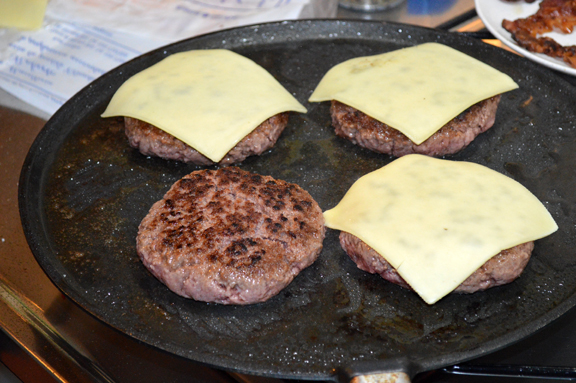 Above: the thing that sets the Italian burger apart from the rest is the quality of the ingredients. Pasture-raised Chianina beef, artisanal cured pork belly, heirloom onions, and wholesome freshly baked bread. It takes the art of this American classic to a new level.

So it’s only natural that Italians would embrace the hamburger with gusto.

Italy’s Slow Food movement was founded in 1986 after McDonald’s opened its first franchise in Rome at the foot of the Spanish Steps. I traveled to Italy for the first time in 1987 and I remember those years well.

To many, the thought of an icon of American imperialism in the heart of the Eternal City was blasphemy.

At the time, Italy already had a fast-food burger chain. It was called Burghy (it was purchased by McDonald’s in the 90s). Like McDonald’s, the quality of the beef was atrocious.

Today, hamburger culture has come full circle in Italy and it now aligns seamlessly with the Slow Food ethos (as you can see from the burger above).

And invariably when you order a hamburger in Italy, when you’re asked whether or not you want bacon, you’ll note that the waiters use the English word for pancetta to denote the way the cured pork is sliced and griddle-fired. 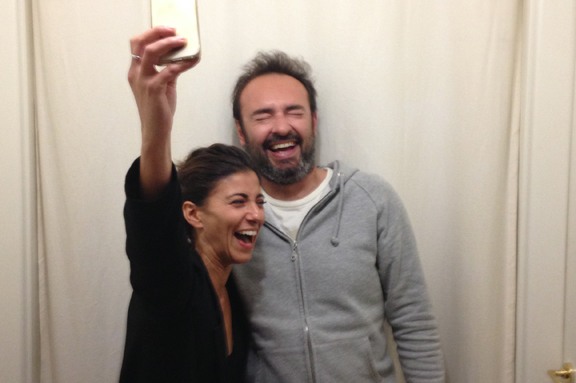 Above: Arianna Vianelli, left, creates and executes menus for many of the Franciacorta consortium’s tastings and events. Giovanni Arcari, right, is my bromance in Brescia, the city that’s become my Italian home base in recent years.

On our last night in Italy last week, my traveling companion Ben Shapiro and I were treated to Arianna Vianelli’s superb hamburgers in the home of my good friend Giovanni Arcari in Brescia.

Arianna had made our first proper meal in Italy a few weeks earlier: spaghetti dressed with dried fresh water sardines, toasted breadcrumbs, and olive oil. The sardines came from nearby Lake Iseo in the heart of the Franciacorta appellation.

It seemed only fitting that she would send us back home to America with bellies full of All-Italian Bacon Cheeseburgers and Franciacorta wine.

Thanks again, Arianna and Giovanni, for taking such great care of two weary American travelers!

2 thoughts on “The All-Italian Bacon Cheeseburger: Italy’s love affair with the hamburger”