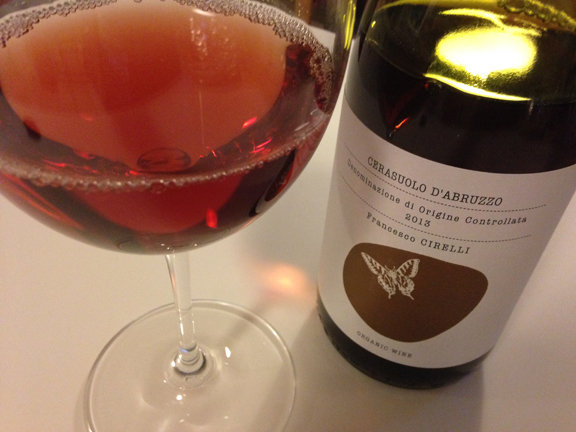 We drank a couple of interesting wines over the weekend.

The 2013 Cirelli Cerasuolo d’Abruzzo is a wine that only recently found its way to Texas. I’ve known and loved the wine for some years now and used to ship it to myself in Texas from California where it is easy to find.

I was overjoyed when I found it on the shelves of the Houston Wine Merchant the other day. Light in body and alcohol, with a fantastic balance of slightly oxidative fruit and minerality, it’s one of our favorite wines here at casa Parzen.

We pay slightly more for it in Texas, in part because of higher alcohol tax (odd for a red-leaning state like ours, isn’t it?).

But the few-dollars difference doesn’t bother me when it lands here at $20 retail.

This wine is so great for so many reasons. But here’s the thing: it’s really and truly everything that Tracie P and I want a wine to be. Slightly oxidative but still fresh, low alcohol and good balance, and wholesome tasting. This is Wine with a capital W at our house.

If I had to pick just one favorite wine for 2013 (and I’ve already tasting some stunning wines this year), this would be it.

The 2003 Allegrini Amarone della Valpolicella Classico was another standout.

Yes, I know, this isn’t the type or style of wine you’d expect to find here. But I can’t tell a lie: it was good.

I looked up Antonio Galloni’s note from his Wine Advocate days back in 2007.

“It is a decidedly opulent, racy wine loaded with dark fruit, but the balance is impeccable,” he wrote, giving the wine 92 points. “In the style of the vintage, the tannins remain a touch firm, but there is more than enough density in the fruit to provide balance. This is an impressive effort in what was a very difficult growing season.”

His review was spot on although I thought the wine was a little bit hot, i.e., alcohol-heavy right out of the gate.

But as the alcohol blew off, it came into focus and the balance of its rich components emerged.

It’s not my style of Amarone. I’m a diehard traditionalist when it comes to this appellation.

But with eleven years behind it, its opulence and raciness, as Antonio put it so well, have mellowed and traded some of their braggadoccio for elegance and nuance.

Cousin Marty had bought it on release and he’d been wanting to open it for some time. And so I’m glad he brought it over. Maybe not what I would reach for myself (especially at that price) but I can’t deny that it was delicious and that cousin-in-law Neil, Marty, and I drank the whole bottle on Saturday night when we got together for a family dinner with all the kids (who love playing together).

That’s it for today. Just a couple of stand-out wines that we opened over the weekend.

Scrambling today to get ready for my first trip of the fall 2014 season. Oy…

If you had told me ten years ago that my work would take me all over the U.S. and Italy because people wanted to pay me to pour, taste, talk, and write about fine wine, I’d have said, “get out of town!”

Now that I have three beautiful girls at home, the last thing I want to do is get out of town.

Thanks for reading… see you on the other side…