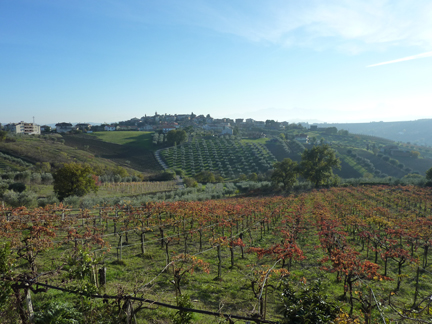 Above: Earlier today, Sofia Pepe sent me this photo, taken mid-afternoon local time in Torano Nuovo, Abruzzo. “There was snowfall” last week, she told me by phone, “but it melted quickly.” Note the leaves on the vines.

“Luckily, we were spared any major damage,” said Sofia Pepe of the Emidio Pepe winery in Abruzzo when she and I spoke by phone this morning.

“We’re about 100 km north of Pescara,” she explained, “and we’re only 10 km from the sea, so the temperatures are warmer here than they are inland.”

She was referring to last week’s blizzard, “Attila,” which destroyed roughly 2,700 hectares of vineyards in Pescara province, including many historic growing sites owned by one of the leading winemakers in Abruzzo, Valentini (see below).

“When there are still leaves on the vines,” she told me, “the snow accumulates on the canopy and can cause the vines to collapse” (see the photo of her family’s Montepulciano above).

“The same thing happened here about twenty years ago.”

Above: Today, leading Italian wine writer Sandro Sangiorgi published this photo of the legendary Valentini vineyards on his blog Porthos. It accompanied a heartfelt letter of solidarity addressed to the Valentini family, who lost some of their oldest and most prized vines.

“My father [who is one of the patriarchs of Abruzzo viticulture] is planning a trip down to Pescara to help them rebuild their vineyards,” said Sofia.

“It’s not easy to do and only the older grape growers know how to do it. But it can be done: when this happened to us in the 1990s, we had a smaller property then but my father was able to rebuild the vineyards in about 10 days.”