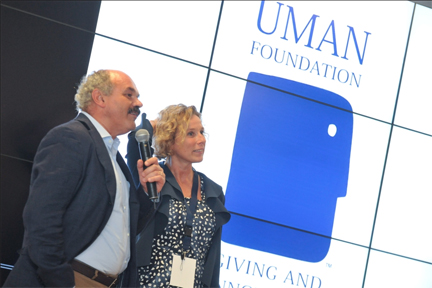 “Entry to Eataly is forbidden to people like [Italian senior parliamentarian] Calderoli,” said the food emporium’s founder Oscar Farinetti to a radio interviewer this week in Italy, adding that the ban was “for hygienic reasons.”

He was referring to Roberto Calderoli, Northern League (Separatist) party member and vice-president of the Italian senate, whose recent racist comments have been the subject of controversy this week in Italy.

Calderoli and his racist cohorts, suggests Farinetti in the interview, “shouldn’t just resign from politics… They should resign from the human race… They lack the conscience that distinguishes humans from chimpanzees.”

Click here for an updated English-language report on the episode and steps Italian officials are taking to censure Calderoli.

You can listen to the interview here.

As an Italian wine and food historian and an observer of Italy’s wine and food trade, I applaud Farinetti for his “no racists allowed” policy.

His statements came in response to the interviewer’s question: As someone who works abroad, are you ever embarrassed by the attitudes of Italian politicians?

While many international ambassadors of Italian wine and food avoid the sticky, unsavory issues of politics and racial tensions in Italy today, Oscar Farinetti’s decisive stand on this issue — zero tolerance for the manifest racism expressed by Italy’s separatist movement leaders — deserves our attention and commands our respect.

Enogastronomy is one of the greatest expressions of the Italian soul — no matter what the political affiliation. As the highest-profile representative of Italian wine and food throughout the world, Farinetti’s example should be a model for us all.