Cousin Marty (above with Tracie P) and I often remark how remarkable it is that two schlubs like him and me ended up with such jaw-droppingly beautiful women. I guess it just runs in the family.

Last night, as their wedding present to us, his better half Joanne and he treated Tracie P and me to dinner at Tony’s, the hottest see-and-be-seen table on any Saturday night in Houston. Judge Manny and wife Betty joined us for what, I think it’s fair to say, was one of the most glamorous nights of our year so far: federal judges, U.S. ambassadors, bank execs, top radiologists, and throw in a sports celebrity or two — everyone came by our table to say hello to Judge Manny. 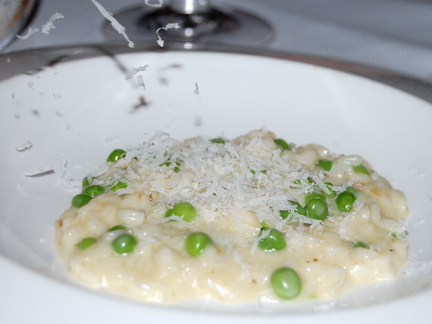 Tony, himself, presided over our table. Knowing our love of regional Italian cuisine, he answered my request for a great risotto with an improvised risi e bisi, a classic dish of the Veneto (where he knows I lived) and a favorite dish of Italian Jews. It was fantastic.

It had been preceded by a burrata drizzled with honey and a balsamic reduction and then topped with freshly grated Alba truffles (SHEESH!).

The tip-to-stalk ratio in the asparagus with Pecorino Romano gave the dish just the right balance of bitter and sweet.

Tracie P’s halibut was served over a sea urchin sauce. 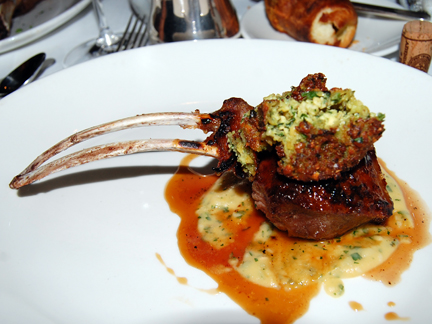 My lamb chops were served over a cannellini “humus” and topped with a crumbled green falafel. Can you humus a few bars?

Sommelier Scott Banks surprised us with a Nebbiolo we’d never tasted, this Colline Novaresi by Fontechiara (Borgomanero, Novara). Extreme value on an otherwise high-roller list, grapey and with bright acidity, fresh on the nose and earthy on the palate, perfect for the wide variety of foods set before us.

Joanne and Marty, thank you for such a wonderful dinner… a dinner-event, really! And thanks, from the bottom of our hearts, for all the support you’ve given me and Tracie P, in this first year of our marriage, as we’ve begun building a life for ourselves in Texas. I can’t tell you how much it means, on so many levels, to both of us. We have so very much to be thankful for and are truly blessed to have you as part of our lives. And who knew my relatives were such fressers and machers?

My lunch with Tony, Manny, and Marty…

Above: At lunch on Friday, I had the great pleasure to break bread with one of the top Italian restaurateurs in this country, Tony Vallone (left). That’s his good friend, and colleague and good friend of my cousin Marty, Manny Leal, right.

Let’s face it: there’s not a lot of great Italian food in Texas. Since moving here a year ago, I’ve found some great authentic-style Italian and Italian-American pizza, notably in San Antonio and Dallas. Otherwise, I cannot honestly say that I have found Italian cuisine that Tracie B and I truly and unreservedly enjoy.

But that all changed when cousin Marty first treated me to dinner at Tony’s in Houston (where, honestly, I cannot afford to dine but have had the great privilege to enjoy many meals now, thanks to the generosity of Marty and wife Joanne).

Above: Following a little cheese-crisp nosh, the medley of regional Italian first courses opened with some wonderful gnudi, “nude dumplings,” ravioli without the casing, a classic dish from the Maremma in Tuscany, traditionally made with nettles.

Tony and his passion for regional Italian cuisine first came to my attention way back in 1998 when I was working as an editor for The Magazine of La Cucina Italiana and the regional and rustico Italian cuisine craze was just about to explode. The magazine ran a 750-word piece on Tony in the front of the book. What I didn’t know then (and only would find out later) was that Tony wasn’t doing regional Italian cuisine because it had become hip or trendy. He was doing it because it’s what he had and has always done.

Above: The ravioli d’astice (langoustine ravioli) were sinfully good. The sauce for this dish, which could have been prepared in Naples or Venice, was made using the corallo (literally, the coral) of the crustacean: when harvested during mating season, the females carry delicious coral-colored roe that gives the sauce its unique color. True mastery of pastamaking is revealed in the consistency and lightness of filled pasta. Tony’s approached divinity.

“I had to go down to the docks and buy the calamari myself from the fishermen,” said Tony, reminiscing about the opening of Tony’s second location in 1972. “They didn’t sell them: they only used them as bait!” Tony was born in Houston, to a Sicilian mother and Neapolitan father, and has worked in the restaurant industry in one capacity or another since he was 11 years old. While Sicilian and Neapolitan dialects was spoken at home, a visiting uncle — the first in their family to achieve a university degree, in anesthesiology — instructed Tony as a child in “standard” Italian.

Above: The delicious amatriciana at Tony’s is made rigorously with guanciale (the cured pork jowl of central Italy, not prosciutto or pancetta) and dressed with pecorino (not Parmigiano Reggiano). From Tuscany to the Veneto, from Naples to Latium, Italian “regional” cuisine sings like Pavarotti (a frequent visitor to Tony’s) at the restaurant.

Since he first opened the doors of his kitchen in 1965 (originally in one of his father’s gaming rooms), Tony’s top sources for regional Italian recipes, he told me, were Carnacina (the father of “regional Italian cuisine,” whose works were first published in Italian in 1961 and first translated in 1969) and the many itinerant Italian cooks and chefs who would come to Houston, where the oil business lured many easterners and Europeans (and their cosmopolitan palates) early on.

Above: One of Tony’s early supporters was his early landlord, the legendary Houston developer Gerald Hines, who encouraged Tony to develop his skills in French cuisine. This Provence-inspired tuna paillard, dressed with a fresh fava beans, heirloom tomatoes, basil, and a classic vinaigrette, perhaps bespeaks an era when French, not Italian, cuisine dominated fine dining in this country.

A turning point came when Houston developer Gerald Hines told Tony that he was not going to renew the restaurant’s lease because the building was to be razed to make way for construction of the Houston Galleria. Hines was willing to give Tony a new and larger space, the developer told him, on the condition that he cultivate his French dishes. The new menu, unveiled in 1972, included fish bonne femme and beef filet au poivre. “We used trout instead of sole because it wasn’t available then for the bonne femme,” recalled Tony. “We used gulf oysters instead of mussels!”

Above: The litmus test for any great Italian restaurant, espresso. The schiuma (the foam) was sublime.

A subsequent visit from Houston social columnist Maxine Messinger resulted in a nearly 30-year culinary love affair. “You’re in trouble,” Maxine told Tony, “I like your restaurant!” By the mid-1970s, Tony’s had become — and continues to be — Houston’s top see-and-be-seen destination. “I’ve cooked for eight U.S. presidents,” said Tony, “six of them sitting presidents.” (I wondered: did the others eat standing up? I guess it doesn’t hurt that two of the last three presidents were from Texas!)

Above: This man… this man… no, he’s not a rebi. He’s my cousin Marty (my dad’s first cousin) and getting to know him and getting to spend time with him has been one of the most delightful however unexpected surprises since I moved to Texas to be with Tracie B more than a year ago. And the best part? He LOVES good food and fine wine. Marty, I’m so very glad that you, Joanne, Dana, and Neil are part of our lives.

But despite the glamor and limelight he enjoyed by adding Francophile cuisine to his offerings, Tony continued to travel to Italy and to New York, cultivating his knowledge of Italian cuisine and authentic regional ingredients. And most importantly, he remained true to his Italian roots. I believe wholeheartedly that his “linguistic” connection to Italy (the fact that he spoke Italian as a child) is a big part of the his genuine connection to truly authentic and truly delicious Italian cuisine. (Have you ever heard Mario Batali speak Italian?) More on this later.

I’d like to think that Tony enjoyed chatting with me the other day: he promised me another meeting and more tales from the wild west of Italian cuisine in a time long before Whole Foods Market carried Arborio, Carnaroli, and Vialone Nano. I’ll look forward to it.

Thanks again, Tony, for an unforgettable meal, and thanks cousin Marty, for turning me on to great Italian cuisine in Texas! Who knew?