One of the more remarkable things that happened between Christmas and New Year’s was our night on the town in Austin with Lettie Teague. Lettie was in Dallas celebrating the holiday with family when Nature, by means of the east coast blizzard, decided not to let her fly back to New York. So, she decided to hit the road and come visit us in Austin, where we took her to some of our favorite spots, like Fonda San Miguel, where we had some huitlacoche tamales (de rigueur). Oddly enough, they were out of our fav Tondonia Rosado by López de Heridia and so Lettie proposed that we drink Gimmonet Champagne instead. The pairing was BRILLIANT!

Later, we took her to another one of our favorite nightspots, Vino Vino, where Jeff disgorged some Puro for her.

And, of course, no night on the town with Tracie P and me is complete without some late-night honkytonking at Ginny’s Little Longhorn Saloon.

Lettie wrote about our evening here. And I don’t care how much ya’ll holler: I ain’t givin’ you the number to the speakeasy we visited! Ya’ll will just have to come down and pay us a proper visit if you want to check it out!

Above: When I made my annual pilgrimage to Montalcino in September of this year, I took time out to visit the monument at Montaperti, commemorating the 1260 battle there between the Guelphs of Florence (the Papacy) and the Ghibellines of Siena (Holy Roman Empire).

In her recent interview on the Wall Street Journal wine blog, “Co-CEO” of Banfi Christina Mariani states that the Brunello controversy of 2008-2009 “was just to make the press… Everyone was cleared, including us.”

When Italy’s top wine blogger Mr. Franco Ziliani (and co-editor of our blog VinoWire) reposted the interview on his blog last week, another top Italian wine blogger, Gian Luca Mazzella, posted links to two entries on his blog in the comment thread of Franco’s post: as he points out in his comment and one of the referenced posts (published by the Italian national daily Il Fatto Quotidiano on October 19, 2010), widely circulated accounts in Italy’s mainstream press reported that Banfi accepted a plea agreement in the Italian treasury’s “Operation Mixed Wine” investigation (where authorities alleged that certain Brunello producers had adulterated their wines, adding unauthorized grapes). It’s worth noting here that Il Fatto Quotidiano is one of Italy’s leading national newspapers.

The only wineries that were officially “cleared” were Biondi Santi and Col d’Orcia (a fact also widely circulated in the Italian mainstream press). 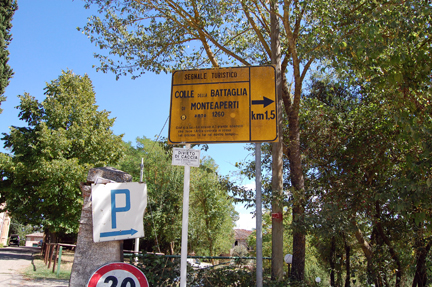 The Ghibellines won the battle but lost the war. Ultimately, the battle’s outcome consolidated the Pope’s power in Tuscany and a new era of Florentine and Papal dominance began.

You’ll note that I am merely reporting what has been written in Italy — before and after Mariani’s recent interview (if so inclined, please click on the links above and read my translations of Italian news reports and the report in the Spectator).

Out of respect for Ms. Mariani (and for a good friend of mine who works closely with her), there is no note of sarcasm nor sardonic editorial here.

I would like to address, however, one of her statements. In the interview, she tells wine writer Lettie Teague (one of our country’s most popular enojournalists and author and a super nice lady whom I know through our professional correspondence and tastings we’ve attended together): “If it’s not a health issue, it’s not an issue for consumers…”

She’s right: the appellation regulations that require Brunello producers to use only Sangiovese in their wine were written and approved by the producers themselves to protect the producers and appellation — not the consumer. In other words, the regulations were conceived to protect those producers who play by the rules in an appellation where 80% of the wine was being made with the addition of unauthorized grapes, according to producers association current president Ezio Rivella who served as Banfi’s managing director until 1999 and left the company after working in Montalcino since 1977 (and with the Mariani family since 1961).

The battle and the events and political turmoil that followed (particularly the papacy of Boniface VIII) are central to Dante’s poem, the Comedy, and the overarching mission of his life — to achieve separation of temporal and spiritual powers in Europe, a notion dear to the forefathers of our country (did you know that Thomas Jefferson, a winemaker, spoke and read ancient Italian and could quote the Comedy from memory?).

Why did I incorporate images of the pyramid at Montaperti in this post?

I don’t get to Montaperti every year. In fact, I hadn’t been there in probably 10 years or so. I studied the Battle of Montaperti when I was a graduate student and have been fascinated with it since then. The 1260 battle there is central to Dante’s poem and its political themes. It marked the beginning of Siena’s decline as a world power and an era of political and human upheaval in Tuscany and Italy. (Montalcino is in the province of Siena, btw.)

As for the Sienese Ghibellines who won the battle at Montaperti but ultimately lost the war, their micro-state (city state) was ultimately absorbed by the greater power of Florence. I’ll let the reader infer any analogy that can be made here.

Thanks for reading. Tomorrow, I’ll pick up where we left off, posting about family get togethers and great wines we’ve been drinking with loved ones during the holiday season.

Check out Lettie Teague’s Wall Street Journal interview with Cristina Mariani, co-ceo of Banfi who says that the Brunello controversy was “just to make the press.” (I’m not sure what that means.) Lettie also gives a shout out to Do Bianchi and VinoWire. Read the interview here.

And for my latest dispatch from Montalcino, read my post Sunrise with a Brunello Master here. 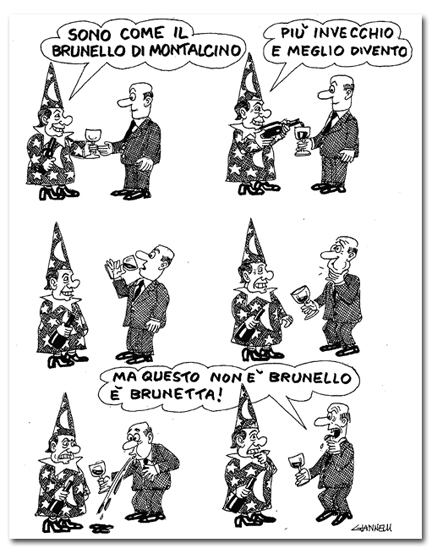 Above: “Maguro sashimi and goat cheese with cracked pepper, Fuji apple and pumpkin seed oil” at Uchi in Austin. If that’s not fusion, then grits ain’t groceries and eggs ain’t poultry…

There’s a new category at Do Bianchi: de austinopoli or on the city of Austin. It appeared for the first time over the weekend, with the “beans don’t burn in the kitchen” post (btw, I swear it wasn’t me who burned the beans: they were burning in Tracie B’s neighbor’s apartment). Austin is my new home (my new desk is arriving this week!) and I’ve already begun posting about our enogastronomic experiences here in Texas. (On Kim’s recommendation, I’ve been reading T. R. Fehrenbach’s Lone Star, a history of Texas, which I find fascinating — the book and the historia.)

Above: “Avo bake, creamy baked tiger shrimp and krab [sic], served in an avocado.” We ordered this dish on the recommendation of my new hair stylist, Felicia. It was a fresh and delicious take on the ubiquitous crab/shrimp casserole you find in Californian “sushi” restaurants.

I’ll confess that I was highly skeptical when so many of my friends (Californians among them) suggested that I take Tracie B to Austin’s top “sushi” destination Uchi. Raw fish in land-locked central Texas? Not exactly in line with the Danny Meyer motto if it grows with it, it goes with it.

What we found was not a “sushi” restaurant per se but a truly delightful and entirely playful “fusion” menu. The restaurant’s signature dish, in particular, “Maguro sashimi and goat cheese” (raw fish and caprine dairy?) seemed to challenge the very tenets of our occidental palates. (In many parts of Italy, for example, the mixture of fish and dairy is considered as taboo as the contact of meat and dairy in kashrut.)

As Franco often points out, rules are rules: I cannot conceal that we both found the confluence of textures to be ethereal (including the delicately unctuous quality of the pumpkin seed oil), the savoriness of the fish an excellent complement to the slightly sweet cheese, and the fattiness of the materia prima utterly decadent.

Rarely do you find waitstaff so knowledgeable (our bartender Scranton was extremely helpful in navigating the unusual menu and negotiating the extensive sake list; he made the long wait at the bar on a Friday night well worth it). We thoroughly enjoyed our experience.

Who’s Who in America just published these interviews I did with Josh Greene, Eric Asimov, and Lettie Teague (click to read). We had fun with the Q/A and you might be surprised by some of the responses. Buona lettura!

If I don’t love you baby,
grits ain’t groceries,
eggs ain’t poultry,
and Mona Lisa was a man.