From the “Nebbiolo meets the Hag” department… 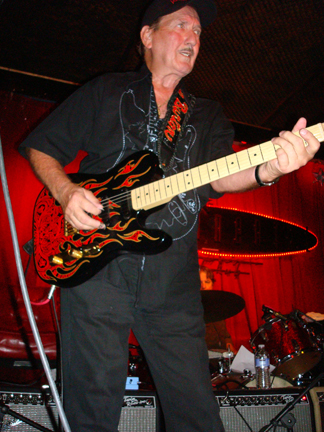 Above: THE LEGENDARY JAMES BURTON has played on more of my favorite albums and tracks than I can count. Check out his discography here. Last night’s show at the Continental Club in Austin was one of the most amazing experiences of my life… literally… We had a blast. Photo by Tracie B.

It’s all thanks to my cousin Marty, who gave my number to Joe Pat, who used to be the wine director at Tony’s in Houston, where Marty is a regular (“John Kerry could be in the house,” said Joe Pat, “and if something was wrong with Marty’s salad, Tony would drop everything to take care of it.”) After taking a glance at my blog, Joe Pat knew what kind of music I liked: “The Hag and Barbaresco are two great things,” he once wrote me in an email (before we met last night), referring to Merle Haggard, “and why are there more references about wine in country music than all genres combined.” Friday, Joe Pat called me to tell me that James Burton was playing at the Continental Club in Austin, one of the greatest American honky tonks (in my humble opinion). 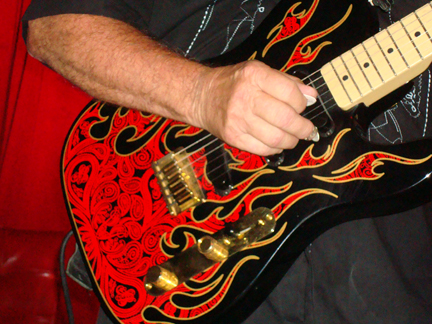 Above: James Burton is the father of a style of guitar playing called “chicken pickin.” A special gauge (thickness) of strings is used to allow the player to bend the strings easily with the middle, ring, and little fingers, while s/he holds a pick in between the thumb and index finger.

He opened his set with “Las Vegas” by Gram Parsons — the opening notes are one of his most famous riffs. What followed was a string of “hits”: he played everything from Ricky Nelson to Elvis and Merle Haggard, and everything in between, all the unforgettable riffs and solos that took some of the greatest songwriting and performances from A to A+. The number that moved me the most was “I am a Lonesome Fugitive” by Merle Haggard: if you’ve never heard it, check it out and you’ll see/hear why his guitar playing is so important in terms of how it shaped popular music in this country. 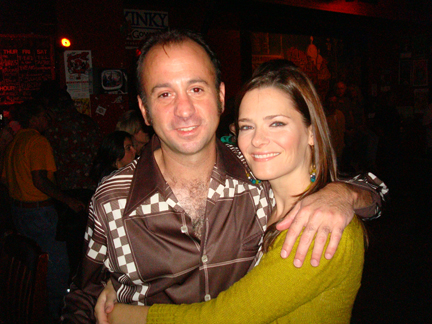 Above: Isn’t she gorgeous? I am simply the luckiest guy in the world to have found her. I mean, she is the sweetest girl in the world and she LOVES her some James! And she can cook… AND she can speak Italian! ;-)

Man, I love this town and I love that girl for bringing me here!

From the “keeping it real” department…

Last April, I hooked up with my really good buddy Gabriele “Elvis” Inglesi after Vinitaly for one of our favorite traditions: meeting the “gang” at the horse restaurant. Yes, the horse — equine meat — restaurant. Horse meat is considered a delicacy in the Veneto (where I lived, studied, and played music for many years) and when Gabriele (aka Lelecaster for his mastery of the Telecaster) and I used to tour as a duo there, we would often spend Sunday evening with our friends at one of the many family-friendly horse restaurants in the hills and countryside outside Padua (btw, Padua is English for Padova, like Florence for Firenze, Rome for Roma, Naples for Napoli). That Sunday night, we went to Trattoria Savio (since 1965) in Legnaro.

Here’s what we ate:

Pony filet. Very lean (yet tasty), horse meat became popular in Europe in the 1960s when it was promoted (in particular by the French government) as a nutritious and inexpensive alternative to beef. In Verona, pastissada de caval — horse meat, usually the rump, stewed in wine — is the traditional pairing for Recioto and Amarone (check out Franco’s alarming article on Amarone, overcropping, and excessive production in Valpolicella, published in the February issue of Decanter magazine).

At Trattoria Savio, we drank pitchers of white and red wine. I’m not sure but the white tasted like Verduzzo to me, the red was probably stainless-steel Piave Cabernet and Merlot.

Gabriele is one of the meanest chicken pickers I’ve ever heard. Great friend, great times.