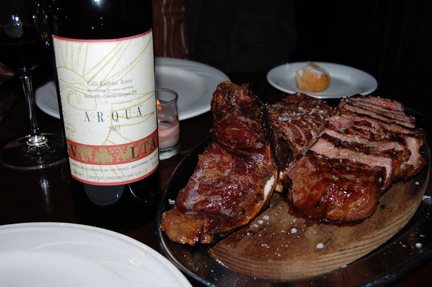 There are three regions of Italy where great Merlot is produced: Latium (Lazio), Friuli, and the Veneto. Yes, there are many famous bottlings of Merlot from Tuscany, many of them very expensive and many collectible. But when it comes to what I like to drink, these are the regions that deliver the minerality and the tar and goudron that I look for in expressions of Merlot.

These three are also the only regions where Merlot has a tradition that stretches back to the early post-war era. Remember: Sassicaia, originally produced in the 1940s and first released commercially in 1968, was and is a Cabernet Sauvignon and Cabernet blend; Tignanello was a Sangiovese and Cabernet Sauvignon blend that appeared in the 1970s. Ornellaia and its Masseto came later.

Merlot was widely grown especially in Friuli and the Veneto in the years that followed the second world war. When you ask the people who live there why their parents planted Merlot? they invariably tell you that Merlot had always been grown there (at least as long as they can remember).

One of my all-time favorite expressions of Italian Merlot is produced by Vignalta in the Colli Euganei in the province of Padua. I feel an especially deep bond to the wines because they are produced in the area where my beloved Petrarch spent his last years (and where he transcribed the Rerum vulgarium fragmenta, the subject of my doctoral thesis).

Here’s my post on our visit to Vignalta a few years ago.

Last night Greg and I shared a bottle of the 2007 Vignalta Colli Euganei Rosso (mostly Merlot with a smaller amount of Cabernet Sauvignon) over a meal at my favorite New York steakhouse, Keens.

The wine, aged in old tonneaux, was showing brilliantly last night and its acidity gave it a freshness that really took our enjoyment over the top. So good with the rare porterhouse.

Keens was wonderful as always and it was such a treat to bump into manager Bonnie as we left.

Vivian is the newest member of the NN+ family. Finally, someone who calls me “uncle Jar”! 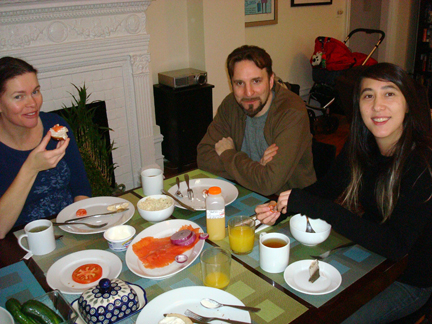 Couldn’t not have Barney Greengrass while in NYC.

What a great wedding…

Eileen and Greg are a gorgeous couple and their wedding was an immensely joyous occasion. I have never seen so many people cry tears of happiness at a wedding ceremony (myself included!). Not a dry eye in the house! 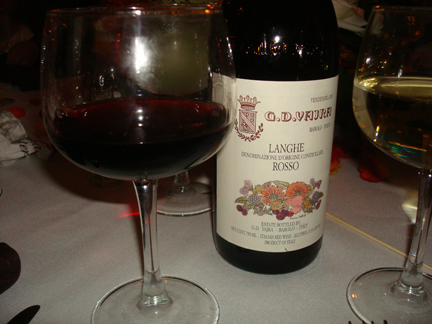 The Vajra showed beautifully, too. The bartender told me she’d “never poured so much red wine at a wedding. Everyone loves it. What is it?” Great choice, Greg!

Greg’s been such a good friend to me and I love him a lot. It was SO MUCH FUN to join him on stage and do my toast. That’s Dan (aka Jean-Luc Retard, bass, Nous Non Plus) stage left.

CONGRATULATIONS EILEEN AND GREG! A great wedding, a great couple. We love you…

Above: Bonnie Day (Emily Welsch) and Jean-Luc Retard (Dan Crane) at the end of our sold-out show in New York on Monday night. Official Sponsor Bollinger (our only endorsement… no Ibanez guitars here!) provided us with a few bottles to end NN+’s “tourette” on a high note.

Touring is never easy and we were all pretty beat by the time we got to NYC for the final show of our tourette, as it was dubbed. 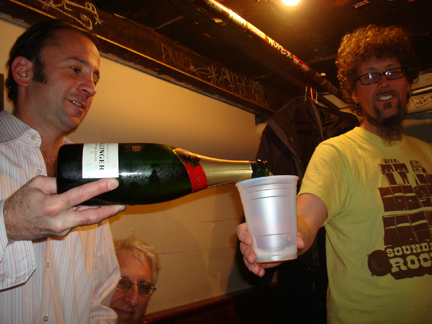 Above: Me (Cal d’Hommage) and Maurice Chevrolet (Ryan Williams) in the green room before the show. Ben Shapiro, seated between us.

Yesterday our new record Ménagerie hit number 22 on the college radio charts. We’ve never debuted so strongly and I can’t conceal that I am thrilled at the response to the record. 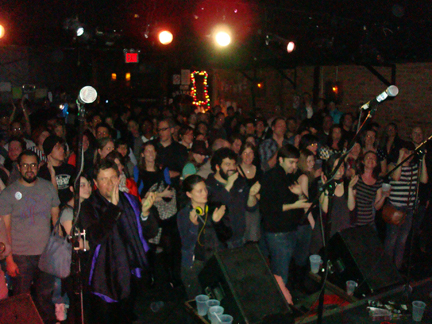 Above: A view from the stage at the show. Thanks everyone for coming out on a Monday night.

A hearty thanks to everyone who came out. Check out JT’s take on the show (thanks for the shout-out, man!).

Above: Cavatelli with broccoli raab at Centovini in SoHo.

Tracie B, Prof. Harry Covert (Greg Wawro) and his lady Eileen, and Ben Shapiro and I convened at Centovini in SoHo for a light dinner (much needed after saucisson lyonnais!) and 2006 Pelaverga by Castello di Verduno before the show. Times may be tough in the NYC restaurant world these days but Nicola Marzovilla’s mother Dora’s cavatelli are always a winner in my book. The 06 Pelaverga had a richer mouthfeel (more corposo, you would say in Italian) than in previous vintages I’ve tasted. I like the way that winemaker Mario Andrion is making it even more rustic in style. A great food-friendly wine that will pair well with a variety of dishes.

Thanks everyone for visiting Do Bianchi, all the well wishes and the kind words about the tourette. Tracie B and I are back in Austin and tomorrow I’ll start posting about our enogastronomic adventures.

On deck for tomorrow: “The Best Pork Store in New York City.”

Next week, I’ll post on the Apulian tasting that Charles Scicolone and I presented at the New York Wine Media Guild luncheon on Wednesday. In the meantime, here are some images from my quick trip to the Big Apple (well worth it if only to party in Harlem the night of the election!).

Bar Milano is my new favorite NYC hang. My buddy and colleague Jim Hutchinson and I hit it up Wednesday night. We had the 2006 Nosiola by Cesconi, which showed well and was reasonably priced, and the sardine in saor (sardines in a sweet and sour sauce), a classic Venetian dish, were the best I’ve had outside the Veneto. Owners Jason and Joe Denton just know how to do it right and they have got to be the coolest dudes — in every sense — on the NYC restaurant scene.

On Tuesday, Greg Wawro and I celebrated his milestone birthday at our favorite steakhouse Keens, always a winner in my book. I treated Greg to the 1998 Corison (yes, a Californian wine!). Keens has a slightly picked-over vertical of Corison but there are still some good ones left. I’ve always found the wine judiciously made. The 10-year-old Cabernet paired beautifully with the porterhouse (which we ordered black and blue, of course).

Before dinner on Wednesday, I visited Alice and snapped this pic of what has got to be New York City’s most talked about toilet. Alice often writes about her toilet in her blog. (Click on the link and read her NY Times Modern Love piece. I was there the night of the 1977 Monsanto but I cannot reveal the name of her admirer.)

Forget NYC: Tracie B is coming to LJ tomorrow! What music will Benoit play at the JG? Stay tuned…

What a gorgeous and delicious bottle of wine #oldschool #mykindachampagne Thank you again for sharing this @thedrunkencyclist!