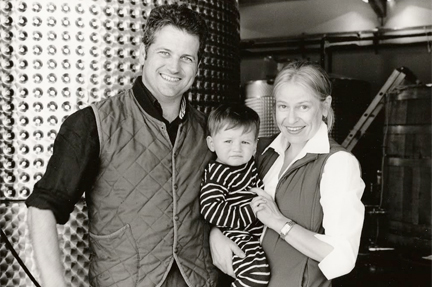 Earlier this month, Maremma producer of Morellino di Scansano and Syrah Gianpaolo Paglia (above, winemaker and owner of Poggio Argentiera, with his family) authored a short post on his blog entitled simply Basta barrqiues, enough with barriques.

In the post he informs his readers that he no longer intends to age his Sangiovese and Ciliegiolo in barriques, small new oak French barrels.

He explains: “In the last 10-15 years, the world of wine has changed. And, above all, my (and our) tastes have changed. This is no disavowal of the past, no repudiation. It’s very simple: one evolves, as a person and as a company.” (translation mine)

Here are a few passages I found interesting and have translated from Gianpaolo’s answers:

In certain wines produced with barriques, there is an excessive sweetness. However much this can be viewed in positive light, I find that it tires the palates. Complexity and nuance tend to be lost, trumped by a certain creaminess in the taste of the wine. Generally, I believe that it is more difficult draw out the character of grapes like Sangiovese and Ciliegiolo, where a certain angularity and backbone form the basis of their identity. And then there’s also the drinkability factor: I’m tired of drinking overly invasive wines.

I can tell you that making wines that will be enjoyed by people who make wine makes much more commercial sense than trying to interpret the tastes of the market. My impression is that we tend not to fully appreciate people who buy wines and drink them. This is probably due partly to a lack of awareness and partly — and perhaps mostly — due to our lack of courage.

There are wines that seem excellent to us but we consider them “difficult” for the market. But, then again, we discover that the market is very open to good wines, real wines, expressive wines. I see this every day, especially since I began to sell wines beyond the wines I produce.

I’m excited to taste the new vintages of Poggio Argentiera and I really admire Gianpaolo for the honesty and forthrightness of his blog and his words (he is, btw, probably the top Italian winemaker/blogger and his use of social media as a tool to promote his wines is world-class).

One of the most vocal opponents of barrique aging of Sangiovese I know is my friend Charles Scicolone, who began drinking Nebbiolo and Sangiovese in the 1970s. “They’ll crucify me on a cross made of barrique,” he likes to say humorously.

It’s too early to tell but could Gianpaolo’s declaration be an early sign of a conversion of Constantine? Let’s hope so… Chapeau bas, Gianpaolo!

In other good news…

It seems that Mr. Ziliani has returned from his blogging hiatus.