Isla, above, stole my heart about a month when I was the dinner guest of her parents, Laura and Marco, who manage Il Palazzone, producer of Brunello di Montalcino. (Of course, Isla stacked the cards by designing the place setting for me below.)

Today, Isla has a newborn little sister: Nia Rose came into this world over the weekend. (“Pronounced Nee-ah, meaning radiant champion in Gaelic,” writes Laura, whom I imagine is quite radiant herself right now.)

Mazel tov, Laura, Marco, Isla, and James! Tracie P and I are so happy for you and are sending you lots of love! And man, this baby fever is contagious! :-) 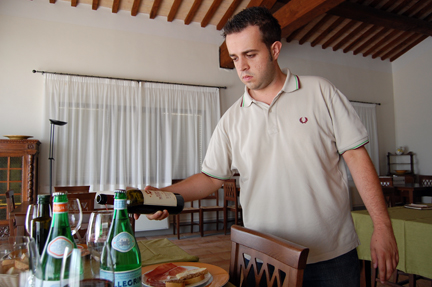 Above: Alessandro Bindocci (above) and his father are “on a roll,” wrote one of my favorite wine writers, Antonio Galloni in the April issue of The Wine Advocate published today. I took the photo of Ale in September 2008 at Tenuta il Poggione.

Alfonso does a series of posts on his blog about “big trees” and “little trees,” in other words, mothers and fathers and daughters and sons who work and live in the Italian wine industry. Alfonso’s worked in Italian wine for some time now and let’s just say that he’s seen a few big trees go and a few little trees sprout up.

One of the things that Tracie P and I thought and talked a lot about on our February trip to Italy was the relationships between mothers and fathers who make wine and their children. In some cases, the children aren’t interested in furthering the legacy of their parents, in other cases they are. Sometimes the conflict that arises thereof can lead to bitter quarrels. Other times there is a harmony — not always perfect but ultimately sturdy — that ensures the continuity of the parents’s legacy.

In March when I went back to Piedmont, I asked Enrico Rivetto’s father what he thought about his son’s newfangled blog. “I think he’s crazy,” he replied. “But, then again, my father thought I was crazy when I told him we should make a single-vineyard Barolo.” However reluctantly, the elder Rivetto supports his son’s blogging project.

My friend Alessandro Bindocci is a blogger as well. His father Fabrizio the winemaker at Tenuta Il Poggione (one of my favorite Brunello producers and my long-time friend), can’t even send an email. Alessandro can monitor vinfication using his blackberry.

I was thrilled to read Antonio Galloni’s glowing words for Fabrizio and Alessandro’s wines on Ale’s blog this morning.

As Tracie P and I talk about us making little trees ourselves, it’s a wonderful and warm thought to think that some day they may get to taste wines in the same traditional style Brunello that we love so much. By the time our putative children will be old enough to appreciate fine wine, the wines won’t be Fabrizio’s any longer. They’ll be Alessandro’s.

Mazel tov, Ale. Congrats on your superb scores from Galloni!

The mere exposure to the visible surface of the world will not arouse ideas unless the spectacle is approached with ideas ready to be stirred up.
—Rudolf Arnheim

For now we see through a glass, darkly…
—Corinthians 13.12

Above: Alfonso took this Antonioni-inspired (Blow up?) photo of me while he and I were traveling in Italy last week with a group of wine professionals following the wine trade fairs, visiting wineries and tasting together. In reading the “signs” of the Brunello affair, I must employ my sensibilities as semiotician and see beyond the “surface of the world.”

Last Wednesday, two days after the conclusion of Vinitaly (Italy’s annual wine trade expo), the Italian daily La Nazione reported that 1) Biondi Santi and Col d’Orcia have been cleared of any wrong doing in the Siena prosecutor’s Brunello inquiry; 2) other wineries implicated in the investigation have declassified their wines and have reached agreements with the prosecutor, avoiding further action against them; 3) “preservation of evidence” hearings were to be held (on Friday) for Argiano, Frescobaldi, and Valdicava. (You can read my translation of the article at VinoWire.)

One of things that has kept many — or at least some — of us rapt in the imbroglio of the Brunello controversy has been the Sciascia-esque twists and turns it has taken. Even though Nino Calabrese, the Siena prosecutor, has never spoken directly about those implicated in the investigation (and although he has claimed to be “abstemious” when it comes to the media), he has used ciphered leaks and statements to the press to move his agenda along. He has never directly addressed the question of who was investigated but he did issue a statement in which he claimed that:

The article published last Wednesday does not cite its source but it would appear that the information came from the prosecutor’s office.

There is certainly some significance to the fact that the prosecutor waited until the day after the conclusion of Vinitaly to release this information. It’s not clear to me why he has singled out Argiano, Frescobaldi, and Valdicava — especially when Argiano opted to declassify voluntarily shortly after news of the inquiry broke.

Calabrese claims to be “abstemious” when it comes to the media (what an apt word choice!) but beyond the surface, he has certainly indulged in a peculiar form of wine writing!

Above: I’ve tasted Il Poggione Brunello di Montalcino and Rosso di Montalcino going back to the 1970s. One of the greatest expressions of Sangiovese I’ve ever tasted was the 1979 Rosso (bottled before the existence of the Rosso di Montalcino DOC and labeled as “Rosso” from “Brunello vines”), which Alessandro Bindocci’s father Fabrizio shared with me last year over steak dinner at Keens in Manhattan.

My friend Alessandro Bindocci, son of Il Poggione winemaker Fabrizio Bindocci, posted today on the proposed creation of a Montalcino DOC: evidently, the vote was put to the floor but no vote was held. Read more here…

I’ll be tasting with Alessandro and his father later this week at Vinitaly.

The editors of Do Bianchi have received countless letters in the wake of the recent Brunello controversy. Space constrictions do not allow us to publish all of them but we deemed the following missive, sent from Paris, worthy of our readers’ attention.

I am but a humble clerk in a wine shop in Paris (on the Place du Panthéon) and a man of limited means. But for decades now I have been an Italian-wine enthusiast and amateur collector. I have followed the l’Affaire Brunello in Italian and American newspapers and magazines. And I’ve also read about it in the blogosphere, where the debate and commentary are no less lively and inspired.

I tasted Brunello for the first time in 1989, when I traveled to Montalcino on a family holiday. Over the years, I have returned on numerous occasions, to visit my old friends in Bagno Vignoni, to dine at the Trattoria Il Pozzo in Sant’Angelo in Colle, to soothe my soul with the intonations of Gregorian chants at Sant’Antimo, and to wander through the rolling hills of the Val d’Orcia and breathe in the dolce aere tosco, the sweet Tuscan air, to borrow a phrase from Francis Petrarch.

Since word of an investigation of Brunello producers first hit the blogosphere in late March, myriad accusations and allegations have been thrown about, videlicet, that producers had used other grapes besides Sangiovese (the only permitted by law) in their Brunello. On Wednesday of last week the Italian agricultural minister announced that the controversy had ended (but has it?).

I have but one passion: to enlighten those who have been kept in the dark. And so I would like to share with you the following reflections regarding the so-called “Brunello scandal.”

When I first visited the wine country there in the shadow of benevolent Mt. Amiata, my friends poured me Brunello di Montalcino side-by-side with the wines of Bolgheri (about a 2-hour drive to the west, on the coast). The former, made from Sangiovese grapes, was bright in color and clear, austere and tannic but balanced by acidity, and natural fruit flavor. The latter were dark and opaque, made from Cabernet and Merlot, with remarkable fruit and tobacco flavors, the tannins mellowed by aging in new French and Slavonian oak barrels. Over the last two decades, some of the wines made in Montalcino — by certain producers — began, more and more, to resemble those made on the coast.

This phenomenon was no secret. Many local residents told me that they had noticed a change in the wines and wine writers in the U.S. took note, rewarding the wines that had seemingly been transformed with higher and higher scores. At least one such wine even received a “perfect” score of 100 points out of 100 from one of America’s leading wine magazines.

This is the truth, the plain truth. But this letter is long, Sir, and it is time to conclude it.

J’accuse…! the Siena prosecutor for launching a criminal investigation in the first place: the issue of adulterated Brunello should have been handled by the Italian agricultural ministry (and not as a criminal allegation).

J’accuse…! the ex-president of the Consortium of Brunello producers for making matters worse by not responding to inquiries by the press and subsequently by the U.S. government for information about rumored investigations.

J’accuse…! the investigated winemakers for not coming forward and revealing their identity while others’ reputations were at stake and were subsequently damaged by virtue of association.

J’accuse…! the editors of L’Espresso who coined the term “Velenitaly” (PoisonItaly) in reference to supposed health risks in other food and wine products and wrongly associated it with the Brunello scandal — the very week of the Italian wine trade fair! This was a case of sloppy, “yellow” journalism and served only to sell magazines.

J’accuse…! the Italian ministry of Agriculture who handled the affaire with marked partisan (Separatist) attitude. His hubris is only matched by his unnecessary and inexplicable delay in dealing with the issue.