I read the news today o boy: Greece’s “jobless rate for people ages 16 to 24… is 48 percent”; and on Monday “After violent protests left dozens of buildings aflame in Athens, the Greek Parliament voted early on Monday to approve a package of harsh austerity measures demanded by the country’s foreign lenders in exchange for new loans to keep Greece from defaulting on its debt.”

Honestly, I wasn’t planning on posting again this week on the Boutari blog.

It seemed like it would be in bad taste to post about things as frivolous as wine and winemaking when our sisters and brothers in Greece are facing some of the hardest times since the end of the of the second world war.

But then, this morning, I received the following, simple however deeply moving message from Santorini…

The sun is rising, the sky is taking a marine blue color and the vine is still sleeping.

The vine grower has already removed the unavailing branches. Now remains the time that vine grower will come and weave the young branches into a shape of basket.

They’ve been growing grapes using bush/basket training on Santorini since the Middle Ages and beyond. And come what may, the vine grower will come and weave the young branches into a shape of basket.

I love the wines that they grow on Santorini and thank goodness for them.

In any other city in the world, you’d expect a restaurant named Dionysos to be another cookie-cutter tourist trap. But when the main dining terrace offers one of the world’s greatest views — the Acropolis! — I become the world’s most unabashed tourist.

You can imagine my thrill at finally viewing this magical place last night and my pleasant surprise in discovering that the food at the elegant Dionysos restaurant is excellent.

I LOVED the avgotaraho — the Greek bottarga, in this case a loaf of cured red mullet roe served over a fava bean fritter and topped with a delicate slice of orange and orange zest.

Our host, Cristina Boutari, insisted that we get the moussaka, saying that it was probably the best to be had in one of Athens’s many tourist restaurants and it was superb: the béchamel and ground lamb were light and delicately seasoned and the eggplant, while keeping its shape, literally melted in your mouth. 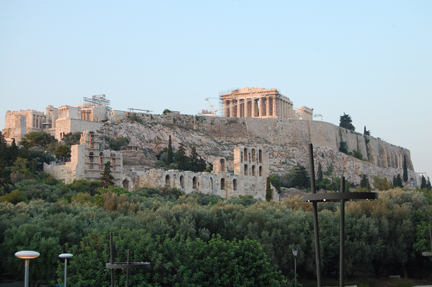 And with such a view, the food could have been terrible and I still would have loved it!

Today we leave by plane for Santorini… Another dream come true… Stay tuned!

Above: Houston Greek Festival director Gus Economides, media coordinator Dana Kantalis, and Boutari sales manager Patrick Bennett. Both Gus and Dana told me that their respective families have been involved in the festival, now in its 44th year (!), for three generations. Great folks, GREAT festival.

I have to admit: I was skeptical. When my clients over at BoutariWines.com asked me to cover the Houston Greek Festival for their blog, I imagined one of those stereotypical affairs, like one I attended over the summer in Austin dubiously titled “Italian Festival,” where the raison d’être was that of profiting through the sale of booth space to vendors and not that of celebrating a community and a culture (Tracie P and I were so disappointed.) 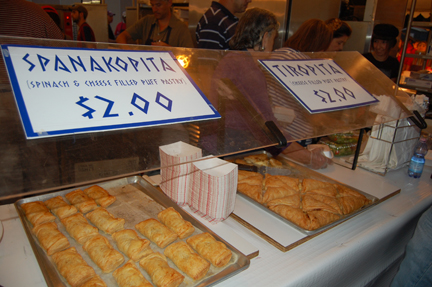 Above: All of the food at the Houston Greek festival is prepared by volunteers. The recipes are decided upon by community committees, mostly community matriarchs, Dana told me). No commercial vendors have a presence there.

To my wonderful surprise, I found that this is an entirely homespun, homegrown, grassroots, and community-based festival intended to celebrate Greek culture and cuisine and to benefit the Annunciation Greek Orthodox Cathedral in Houston and its youth programs. EVERY volunteer (and I mean EVERYONE) told me that this is a family affair, with participation handed down from generation to generation (in many cases, the volunteers were fourth generation).

Above: In my capacity as Bloggeropolos (the non-Greek volunteers Hellenize their names for their laminates), I got to taste a lot of great food. The ingredients were fresh and wholesome and man, were they tasty! I’ve never experienced such good food at a large festival. Very cool stuff.

I’ll be heading back this afternoon to the festival with Tracie P, who’s joining me shortly. And we’re doing other fun food and wine stuff while in Houston and on our way back to Austin tomorrow. In the meantime, check out the slideshow I created from my photos yesterday.

Today finds me on my way to Chicago, city of my birth. I’m headed to the Windy City for the launch of a new gig, the Boutari Social Media Project 2010. For the next year I’ll be traveling around the country, tasting wines from 6 estates in the Boutari family of wineries, and talking to folks who pour and pair Greek wines with their favorite foods.

What better place to start than Greektown Chicago?

Back in November 2009 when I was first approached and asked to write a proposal for this project, I never thought it would come to fruition. And now here I am about to board a plane… I’m truly honored that my proposal was chosen and that I’m about to embark on what I believe will be a ground-breaking adventure. Trips are also planned for New York, Miami, and Houston.

Above: despite his modesty, wine writer David Lynch is no second-string sommelier (center, with enologist Antigoni Karamvali and marketing director Valerie Tsakiris of Boutari).

It seems that Greek wines are in the air: Eric included a wine from Santorini in a post and column this week and I recently learned that the 2008 Food & Wine Classic in Aspen will include a seminar on Greek wine led by David Lynch — wine writer, top-flight sommelier, and all-around good guy.

Week before last, David and I attended a tasting of wines by Boutari (whose website is written entirely in Greek). Besides Boutari’s winemaker and marketing director, we were also joined by Mitch Frank of The Wine Spectator, a former political writer (whose insights into the current campaign were fascinating).

David likes to joke that he’s a “J[unior] V[arsity]” member among NYC’s top sommeliers but, let me tell you, this guy really knows his stuff: few can rival his knowledge of Italian wine and he’s tasted and poured with the best of them.

“95% of the value of a wine in a restaurant,” he said, “is the serving temperature and the stemware. Serve a $35 bottle of wine at the right temperature and in the right glass, and it’s worth twice that much.”

Above: of the whites, I really liked the Moscofilero (left) but the Santorini (center) blew me away.

While the higher-end blends of native Greek varieties and Bordeaux grapes were international in style and heavy on the wood, the lower-end bottlings were fresh, clean, and delightful. The Moschofilero (white) was distinctive, slightly musky, and delicious with grilled octopus and I really liked the Santorini, made from Assyrtiko grapes, a white with balanced mineral and fruit flavors.

As Eric mentions in his post, the vineyards on the volcanic island of Santorini are a sight to behold (I’ve never been but have seen photographs): the vines are trained in “bushes” (or baskets, as enologist Antigoni Karamvali called them). Bush training helps to protect the vines from strong winds (the same training methods are used in Sicily and Apulia). The bush training also allows the vine to “migrate”: Antigoni showed me images of vineyards originally planted in perfectly straight rows, where the vines had crept — at slightly different rates — to more humid parts of the vineyard. Drinking this wine, you really get that sense of place, that sensation that this wine could have been made no were else in the world.

The wine that surprised me the most, however, was the Nemea (a place name), made from 100% Aghiorghitiko (also known as Agiorgitiko) grapes: the wine was light in color and in the mouth, with wonderful red berry flavor, a perfect wine to serve slightly chilled on a summer’s eve with filleted branzino (otherwise known as Mediterranean sea bass). From what I understood, the price-point for this wine should weigh in under $20.

This was no wine of Circe.* And, hey, if David is pouring, I’m drinking.

Thanks to everyone for the messages and positive vibes for VinoWire, which launched this week with a scoop about the changing of the guard at the Bruno Giacosa winery. I am proud to report that VinoWire was the first publication — Italian or English — to to break the story and to reveal the name of the new winemaker. Stay tuned to VinoWire for more…

* For [the painting] “The Wine of Circe” by Edward Burne Jones.

Dusk-haired and gold-robed o’er the golden wine
She stoops, wherein, distilled of death and shame,
Sink the black drops; while, lit with fragrant flame,
Round her spread board the golden sunflowers shine.

Doth Helio here with Hecatè combine
(O Circe, thou their votaress!) to proclaim
For these thy guests all rapture in Love’s name,
Till pitiless Night give Day the countersign?

Lords of their hour, they come. And by her knee
Those cowering beasts, their equals heretofore,
Wait; who with them in new equality
To-night shall echo back the sea’s dull roar
With a vain wail from passion’s tide-strown shore

Where the disheveled seaweed hates the sea.