One of the things that people don’t realize about gastronomy in Emilia — the land of Prosciutto di Parma, Culatello, and Parmigiano Reggiano where there are more pigs and Ferraris per capita than anywhere else in the world — is that you have to venture outside of its capital city Bologna to find the best food.

Another crucial element that many people miss is that for great bollito misto, you have to head west from Bologna toward Modena and Reggio Emilia. That’s the true spiritual homeland of bollito misto.

What is bollito misto? It’s meats that have been slowly simmered together. It’s typically made in different parts of northern Italy. But in Modena and Reggio Emilia zampone is used instead of cotechino sausage to give the dish its decadent character.

What is zampone? Meaning literally hoof, zampone (the sausage) is a pig’s trotter that has been filled with head cheese. It’s considered one of Italy’s greatest delicacies (and it’s one of my favorite things in the world to eat!). 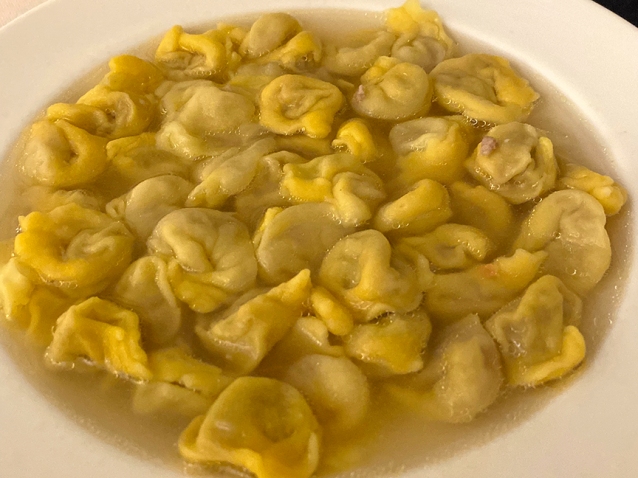 Above: in Reggio Emilia, cappelletti are similar to but have a slightly different shape than tortellini from Bologna.

The morning after our epic night out in Bologna, my crew and I headed to Reggio Emilia where I begged the owner — I practically groveled — to find us a spot for lunch at the packed Canossa in the city’s center. He ultimately acquiesced to my pleading, thankfully. And by 2 p.m., after a 45-minute wait, we were seated. Needless to say, it was worth the wait.

Canossa is a dream restaurant for me. From its dated décor to the amiable, very human staff, it’s like a filmscape for me. I’ve eaten there on many occasions over the years. And nothing — and I mean NOTHING — changes there.

Above: the bollito “cart.” Note the zampone being sliced by the server.

Even before the Lambrusco hits the table (and to drink anything else beside Lambrusco at Canossa would be heresy and sacrilege), you are welcomed with cubes of mortadella (one of the restaurant’s signatures, an unusual way to serve the finely ground sausage).

But it’s the bollito that reigns supreme as the meal’s pièce de résistance. It’s just one of those dishes for which the irrepressible anticipation and the (Proustian) memory are almost as good as the dish itself.

Above: my bollito selection was zampone and wild turkey. We’re so accustomed to eating bland commercially farmed turkey here. Wild turkey is a whole different experience. Not the jus the server added to mine.

There’s just something about the experience that makes you — or at least me — feel like I’m watching a movie where I’m one of the characters. I really can’t quite describe or capture the sensation. My photos here make for poor mimemis. But hopefully you get the idea.

The one dish not pictured here was the cotoletta di maiale, a pork cutlet smothered in béchamel and creamy Parmigiano Reggiano. Our bellies were so filled with Emilian joy that I forgot to snap a photo.

What a meal, what a memory! I wish I could do it all over again today for lunch this Sunday, or any day for that matter. But maybe the greatest part of it (at least for those of us who don’t live in Emilia) is that it only happens once in a blue moon.

Thanks for letting me share the memory with you here.

One thought on “A bollito of my dreams at a favorite restaurant in Emilia.”