Above: Tracie and her friend LaToya at the Saturday, June 13 protest of the Confederate memorial in Orange, Texas where Tracie and LaToya both grew up and attended high school together.

Despite threats of violence and rumors that “Antifa” would be at our Saturday protest of the Confederate memorial in Orange, Texas, our demonstration was peaceful and without incident.

You can watch footage of the event, including interviews, here on the local Fox affiliate.

And one of the local papers of record, the Beaumont Enterprise, filed this report, including a slide show of photos taken at the protest.

We’ve been protesting the site since 2017 but this was the first time that Sons of Confederate Veterans and their supporters appeared at one of our gatherings. Some of them drove up to three hours to be there. Apparently, they were answering a “call to arms” by social media users who believed we were there to tear down their memorial.

We have never advocated for it to be destroyed. From day one, we have asked for it to be repurposed and we have called for the Sons of Confederate Veterans to enter into dialog with us about how this site is impacting the community. The name of our campaign and our website is RepurposeMemorial.

Given the alarming tone of the rumors being spread on social media, it’s likely that they were heavily armed. And they were drinking alcohol throughout the morning while we were there.

One of our members also received a direct threat from a co-worker, a middle-aged white man who said he would use us as “target practice.” Evidently, he was already being tracked by local authorities for previous threats of violence. They were so concerned about him that they sent police to our member’s home and to his home as well. And they decided to have a robust police presence at the event.

Tracie and I would like to share our heartfelt thanks with Orange Mayor Larry Spears, Orange County Judge John Gothia, and the Orange Police Department for keeping us all safe on Saturday.

After the protest ended, Tracie and I spoke to some of the Sons of Confederate Veterans and their supporters. As they always do, they claimed that the Confederate flag was not a racist or divisive symbol. Nothing new on that front. But this was the first time that any of them even spoke to us or listened to our position. I hope it’s an “opening,” a chance for us to start talking about how they “celebrate their ancestors” without offending black residents’ sense of belonging.

In the past, we’ve bought one-month stretches of advertising (thanks to the generosity of donors). You can see the current billboard below. We are currently working on a new billboard and once we raise the funds, we plan to have a series of billboards appearing over the course of 52 weeks.

Thank you for your support. We’re not giving up this fight. Ever. Thank you. 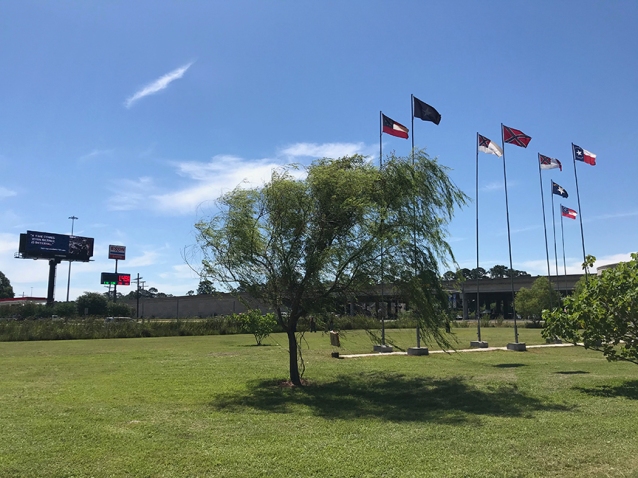