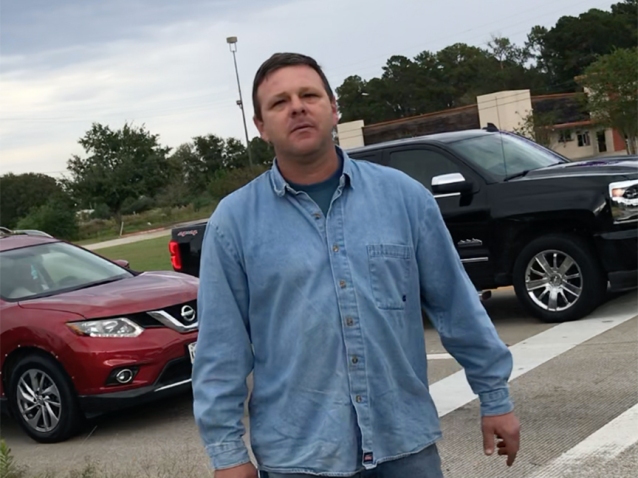 On Saturday, NowThis Politics reposted a video entitled “Conflict Over Confederate Monument in Texas” which it had originally published in November 2018.

It was produced using video that Tracie shot at one of our protests of the newly built Confederate memorial in Orange, Texas where she grew up.

We’re not sure if NowThis was aware that we were protesting the memorial on Saturday, part of our ongoing campaign to repurpose the memorial which stands on Martin Luther King Dr. in a community that’s half black.

Even before NowThis posted the clip, the man had been identified by social media users in the Orange area.

Not long after the video went viral, Tracie saw him at a local supermarket while shopping. That’s how small and close-knit Orange is.

Other than removing selfies with his arsenal of weapons from his Facebook, we don’t know whether or not he faced any consequences stemming from his tirade other than his evidently undesired celebrity.

The video has gone viral again and Tracie and I have been receiving notes from social media users across the country, all of them positive and expressing solidarity. It means the world to us that people support our efforts to repurpose a memorial that includes Confederate flags flying over a city with a sordid legacy of racist violence.

If you’d like to help, please consider giving to or sharing our GoFundMe campaign to keep our MLK billboard overlooking the site for 52 weeks. The billboard (below) is currently up there, across the road from the site and viewable from the Interstate (I-10). But our current contract with the ad company will expire on July 11.

Please also visit RepurposeMemorial.com where we post about our campaign. And please join us for our next protest in mid-July.

Thank you for your support and solidarity. It truly means the world to us. We’re not giving up or giving in. We are determined to make the world a better place for our children — and all children — to live in, free of hateful iconography.