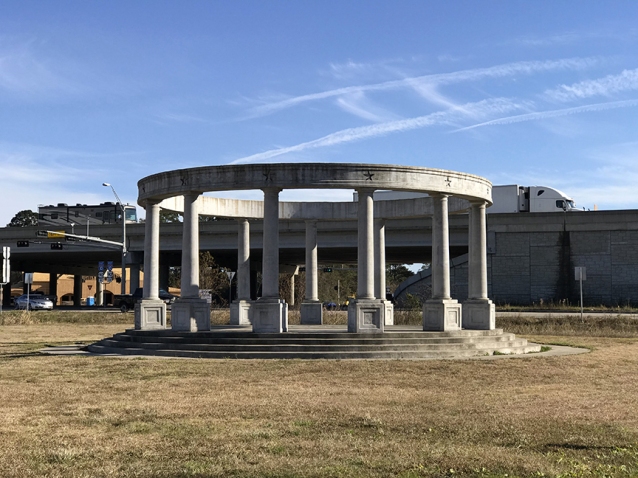 This week, my wife Tracie’s 97-year-old grandmother received an anonymous letter defaming her granddaughter and me. The author claimed to have gone to school at the same California university where I received my doctorate. She/he evidently felt compelled to share slanderous, false information about our lives, including our sex lives and our children.

Known affectionately by everyone in our family as “memaw,” my grandmother-in-law was unfazed by the letter. She didn’t even bother reading it, she said, once she realized what it was.

There’s no doubt in any of our minds that this crude and anemic attempt to bully us was inspired by our efforts to repurpose the newly erected Confederate memorial in Orange, Texas where memaw and Tracie’s parents live.

Thats the “Confederate Memorial of the Wind” above. Here’s a Houstonia article, published last week, about our campaign and its origins.

As Tracie’s father, Reverend Randy Branch put it, “someone who would send this to your 97-year-old grandmother can’t be all there.”

Why are white supremacists so dumb? The answer begs the question.

Since we began our campaign to repurpose the site (we don’t want to tear it down or demolish it; we want to repurpose it to reflect community values in a city that is nearly 50 percent black), our detractors have threatened to “kick your ass” and to “send snipers” to our next protest.

But as anyone who lives in Southeast Texas knows, the Sons of Confederate Veterans (who erected the site) and their supporters are generally a bunch of cowards whose bullying comes in the form of epithets hurled from a passing pickup truck, social media posts, and — now — an anonymous letter.

Given the many phallic references in the missive, I imagine the author is a male. Here’s my message to him: be a man and come meet me face to face, man to man, and human to human at our next protest on Saturday, April 7. No threat or smear campaign is going to stop me or us. So be a man, be a human being, and show your face and real colors.

Are you man enough? No, I didn’t think so. That’s the kind of sheep you are, isn’t it? The fact that you send anonymous “poison pen” letters to our memaw is clear indication that we are getting through to you and making you uncomfortable. That’s exactly what we want. Get ready for more, pilgrim. And in the meantime, shame on you.

7 thoughts on “No smear campaign is going to stop our protests of the Confederate Memorial in Orange, Texas”