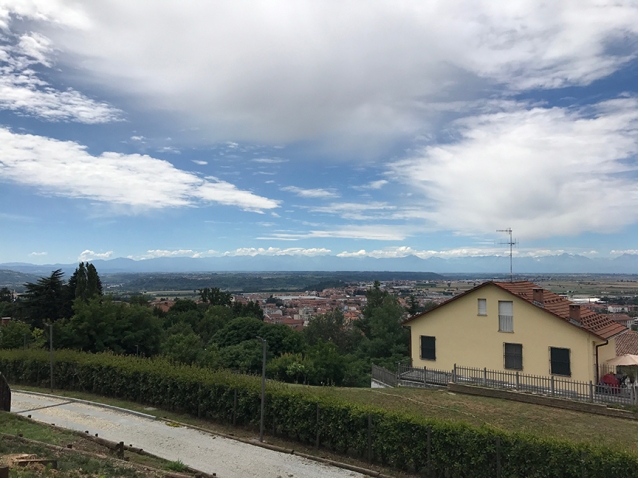 Before the Parzen family headed to southern California for our summer 2017 vacation and my 50th birthday celebration, I spent a week in Bra, Piedmont, where I taught two seminars at the University of Gastronomic Sciences (Food Writing in the Digital Age and Wine in Boccaccio’s Decameron).

I really enjoy the teaching (I’ll be back in November teaching wine writing and it looks like I’ll be doing four or five grad seminars, all taught in English, next year).

And I’ve really fallen in love with the little town of Bra where the university is located. It reminds me of my student days in Padua, before the age of Berlusconi and the rise of the hard right in northern Italy. Back then, Padua had countless pubs, inexpensive restaurants, and a vibrant student community.

That’s a view, above, facing west toward the Alps from the highest point in Bra, at the octagonal Zizzola House. 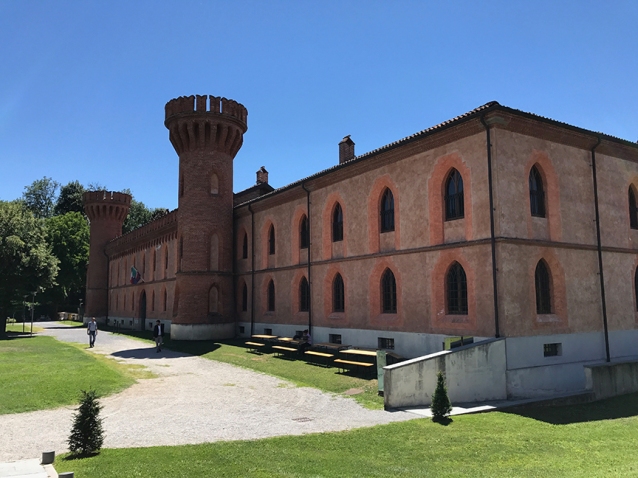 I know a lot of people are curious about the toponym Bra (and the homonymic jokes are as predictable as they are forgivable).

The place name Bra comes from the late Latin braida, meaning open field or arable land. Its origins may be Longobard and it is sometimes transcribed as breda. But regardless of Longobard inflection, most agree that it comes from the classical Latin praedium meaning farm or manor.

That’s the castle in the nearby hamlet of Pollenzo, above. Today, it is home to the university, its staff, and its classrooms and lecture halls. But it was once a country residence inhabited by the House of Savoy. It’s surrounded by rich farmland, hence the Roman name Braida and the Italian name Bra. 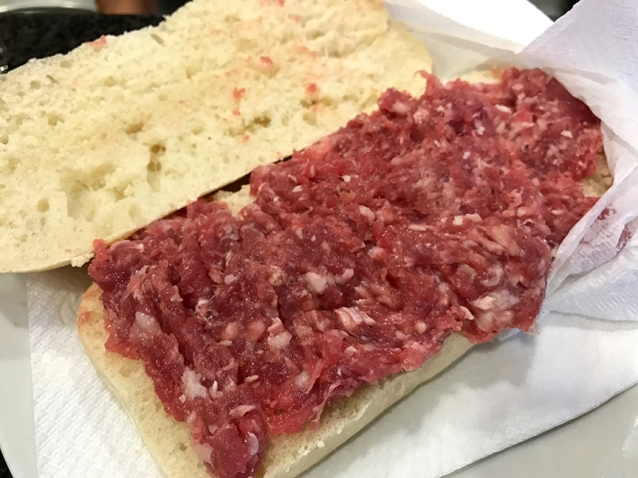 Bra is famous for its raw veal sausage, salsiccia di Bra, unusual because it’s not made from pork.

It’s generally served in its casing, sliced into small links. But it can also be served with its casing removed, like the sandwich that my favorite bar made for me on my last day of class. Delicious! 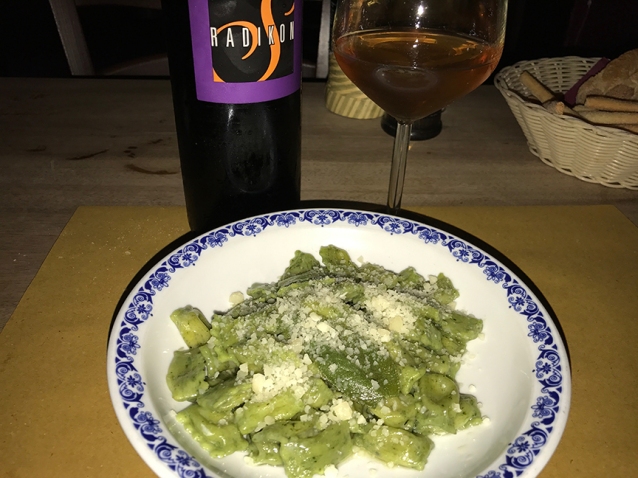 I paid 30 euros for that bottle of Radikon (!!!) and it paired brilliantly with spinach (not traditional) agnolotti. It’s a good spot for gastropub fare and a decent salad. I’ve eaten more than one buffalo-milk mozzarella and Prosciutto di San Daniele plates there (not local food products but expertly selected and fresh nonetheless). 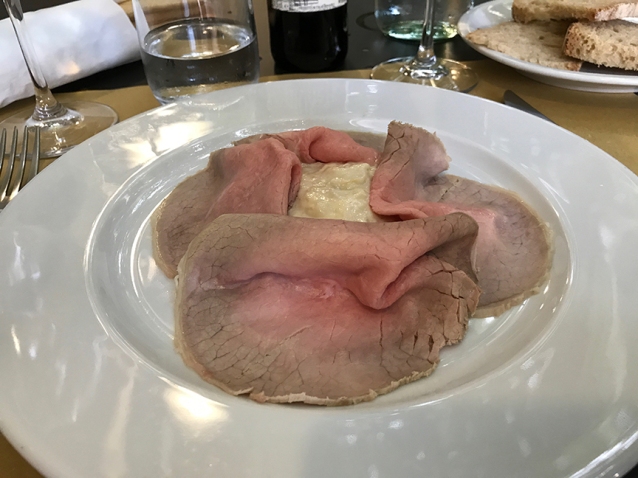 My favorite meal in Bra was at the classic Osteria Battaglino, where rigorously traditional fare is paired with the type of wine list people like me dream about: moderately priced, classic-leaning, and with older vintages of Nebbiolo that aren’t prohibitively priced.

That’s the vitello tonnato, which I paired with a superb bottle of Chionetti Dolcetto. This place can’t be beat. But there are also a number of traditional-style osterias in Bra, many of them beloved, including the historic Osteria Boccone Divino, where the Slow Food movement got its start (and where the food and wine list are great). The whole town, I discovered, is inspired and informed by the Slow Food ethos. 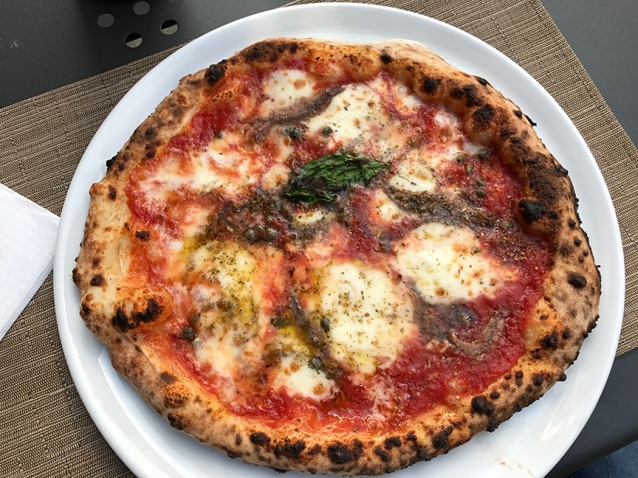 One of the things that’s remarkable about Bra is that you find all kinds of world cuisine there, like this fantastic pizza I devoured at the newly opened Gennaro Esposito pizzeria.

You generally don’t find classic Neapolitan pizza outside of Campania (note the soggy middle and slightly burnt edges). But this pizzaiolo is keenly aware of the high standards for authentic food in Bra. It may be blasphemous to eat pizza in Piedmont but I have no regrets… 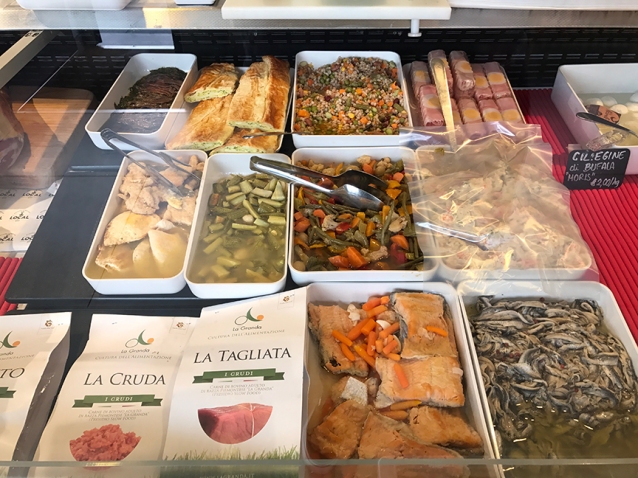 Local, above, is the university-run food shop and it offers a wide selection of artisanal cheeses and salumi, not to mention other gastronomic delicacies.

Think of it as a high-end Italian delicatessen, conceived with fressers like me in mind. I stopped there a few times for sandwiches made to order. They also do an excellent coffee and pastry service in the morning. The students complain that it’s too expensive but it was worth every penny in my experience. 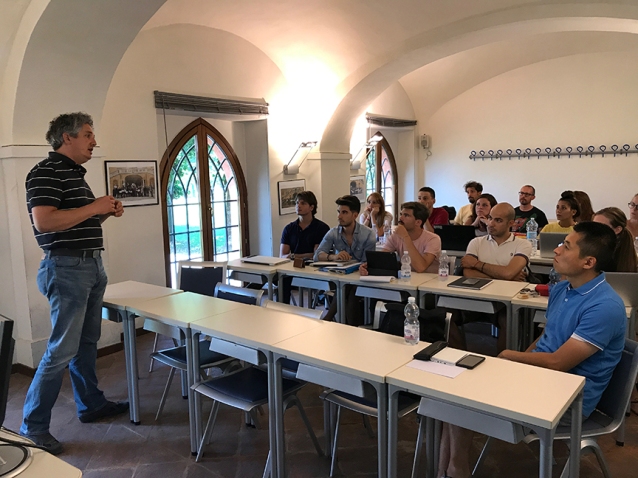 Of course, everything in Bra is centered around student life. That’s professor Michele Antonio Fino, above, left, my friend and director of the grad programs. He’s speaking to my wine and literature class.

As of this year, all the grad classes are conducted in English. I miss teaching in Italian, like I did last year. But with a healthy mix of international students, including many Americans, English works better, for sure. And the non-anglophone students really seemed to appreciate the language practice.

One of the students’ favorite places to eat is L’Alfieri, a international-cuisine restaurant with a great wine and beer list, owned and run by an ex-student. The hamburger was awesome there (made with top Piedmontese beef). And I played a piano bar set there on my last night in town (the owners said they’d have me back in November, so I guess I passed the audition!). The Indian food also looked good there. 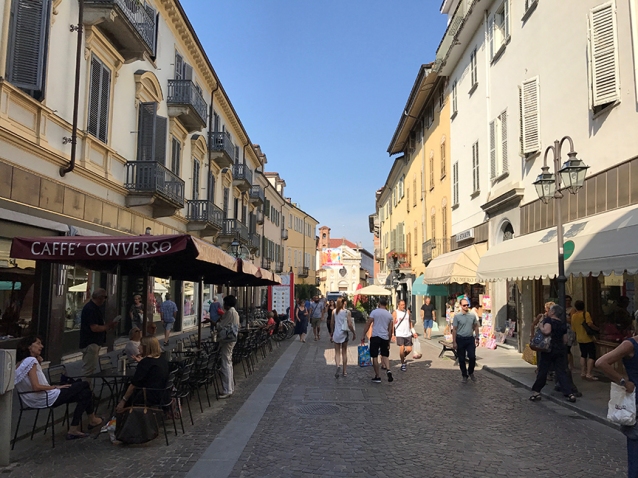 As you can see from Bra’s main drag, Via Cavour, above, the city has a nice balance of cafés, shops, and boulevard culture.

I really liked the human dimension of the town’s urban layout and I loved the small-town but very cosmopolitan feel — owed no doubt to the presence of Slow Food Publishing and the university, with its international student body. 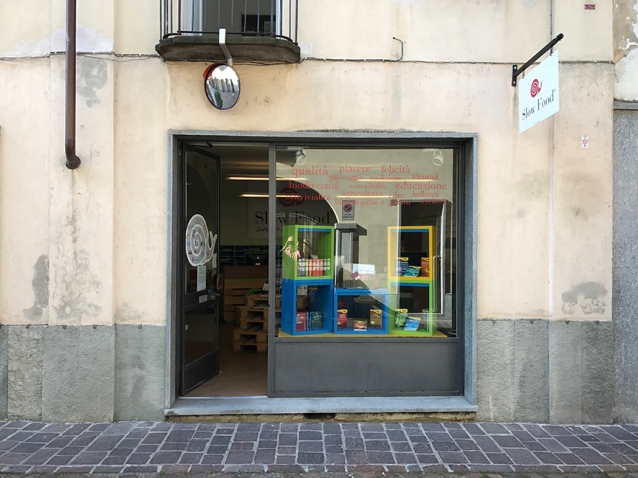 Slow Food’s founder Carlo Petrini was born in Bra and Bra is where the Slow movement — now an international grassroots organization — was born in the late 1980s.

Some how, even as so much of small-town life has disappeared in Italy, eclipsed by countless shopping centers and fast food restaurants that began to appear in the late 1990s, Bra has managed to remain small and slow.

I was dismayed to see a sign for Kentucky Fried Chicken (!!!) when I visited Franciacorta (Brescia province, Lombardy) at the end of my sojourn. It’s the latest arrival in a regrettable wave of American fast food brands (sigh).

Unless hell freezes over, I can’t imagine Bra will ever fall victim to such consumerist hegemony. Burger King in Bra would be a true aberration and the braidesi would never allow it.

And that’s fine by me…