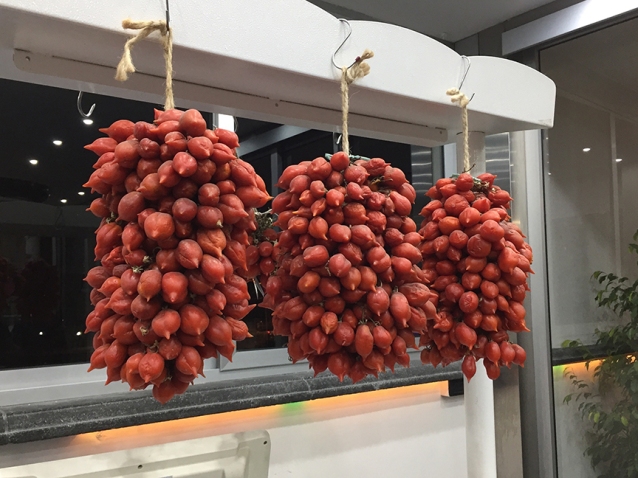 Last November, after my friend Marina Alaimo, a Neapolitan sommelier and publicist, took me for dinner at Haccademia, an excellent pizzeria on Mt. Vesuvius that she represents, she shared a short bio of pizzaiolo Aniello Falanga and a short history of his restaurant.

I was struck by what Aniello wrote at the end of the piece and I have translated it here.

“Without a doubt,” he notes, “pizza has covered a lot of ground. It’s gone from being a humble, inexpensive street food to becoming a symbol of good eating and hospitality throughout the world. This continues to amaze us. But it also inspires us.”

It’s remarkable to contemplate: in the arc of my own adolescence and adulthood, pizza in the U.S. has been transformed from the pedestrian New York slice and the post-soccer-practice weeknight meal for American parents who don’t feel like cooking to a fetishized and cultish sine qua non of haute Italian dining.

What mid-sized American city today doesn’t have a genuine Neapolitan wood-fired pizza oven crafted by a bona fide Neapolitan mason? By the time I arrived in Texas in 2008, the state already had classic Neapolitan ovens in San Antonio and Austin. Today, just eight years later, Neapolitan-style pizzerias and pizzaioli are practically ubiquitous.

When I was a kid growing up in San Diego, the pizzeria de rigueur was Pernicano’s, where a Venetian gondola graced venue’s nave and Mr. Pernicano manned an electric organ and serenaded the guests with pseudo-Italian classics. Today, from San Diego to New York, from Seattle to Miami, pizza-lovers ride on the wave and wake of the so-called “pizza wars” of the 2000s, when classic Neapolitan pizza ovens and handfuls of sawdust became the tanks and bullets for an army of self-determined pseudo-Neapolitan pizzaioli.

One thing we don’t have here in the U.S. is genuine Vesuvian tomatoes, like those in the photo above. The Pomodorino del Piennolo del Vesuvio or Vesuvian pendulum cherry tomato can only be found on the slope of the volcano, where it is grown in the volcanic subsoils of 18 townships (piennolo is Neapolitan dialect for pendulum, a name derived from the unique shape of the nightshades; click this link for the pronunciation on YouTube). The Vesuvian pendulum remains the red standard for its unmistakable balance of sweetness and acidity. It’s one of the world’s greatest examples and expressions of the concept of terroir.

Here are some photos from our superb dinner that night with a group of her friends at Haccademia, which I highly recommend to you.

A sampling of the herbs that Aniello grows and uses in his kitchen.

The Pizza Margherita, the litmus test for any pizzeria and pizzaiolo. 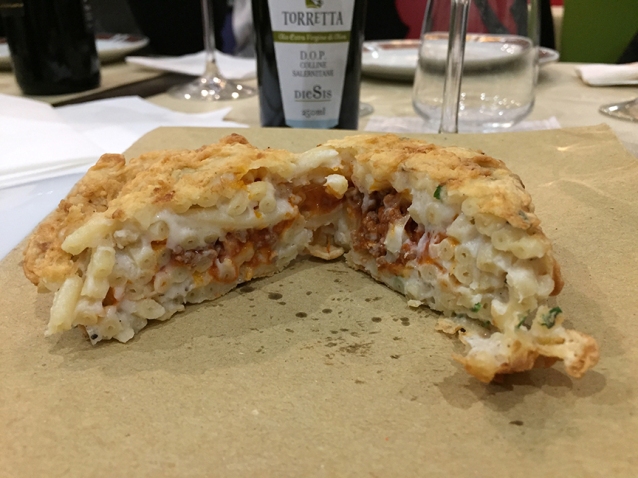 Why hasn’t the Neapolitan tradition of fried macaroni caught on yet in the U.S.? Take note American pizzaioli and please make this the next big thing!

I visited Naples in November of last year when butternut squash was in season, hence Aniello’s “seasonal pizza.”

You’re hard-pressed to find a leafy green in Piedmont, Lombardy, or Veneto in November. But during Campania’s winter, escarole is a godsend for those who suffer from Jewish boy stomach.

One thought on “The unlikely rise of pizza as an American favorite and Haccademia, a favorite pizzeria on Mt. Vesuvius”