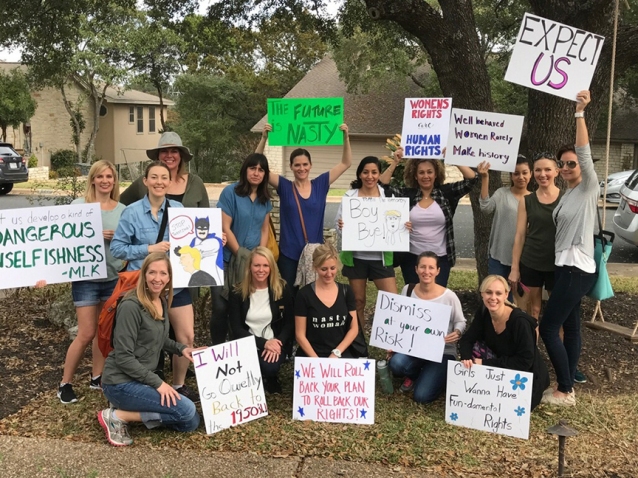 In the wake of Trump’s election, Tracie P and I begin planning our trip to Washington, D.C. to attend the Women’s March with our girls.

We had even lined up a place to stay, with friends in Bethesda. But when someone fired a gun at a favorite pizzeria in their neighborhood (claiming he was investigating a Clinton conspiracy theory), we decided that the potential for violence was too great. We agreed that I would stay home with the girls and that Tracie would attend the march in Austin, the Texas capital.

That’s Tracie above (in the back row, more or less in the center, green sign in hand) with her group of friends and comrades who marched yesterday in Austin.

Since the election in November, Tracie has organized a women’s activist group that meets regularly in our home. She has visited both U.S. senator Ted Cruz’s and senator John Cornyn’s office to protest Republican efforts to dismantle the Affordable Care Act (a core issue for us). Last Sunday we, including the girls, attended a rally led by U.S. congresswoman Sheila Jackson Lee to protest the ACA’s dismantling by republicans as well (below).

In the light of Trump’s campaign platform, I still can’t wrap my mind around the incongruous fact that Evangelical Christians supported Trump in the election in such great numbers. Recently, I’ve taken to studying the Christian Bible to get a greater understanding of their reasoning. The following passage, from the Epistle of Saint James, sticks out in my mind:

Come now, you rich people… Listen! The wages of the laborers who mowed your fields, which you kept back by fraud, cry out, and the cries of the harvesters have reached the ears of the Lord of hosts.

G-d bless America. I will continue to write about Trump America here on the blog and I’ll continue to post updates on our family’s efforts to raise awareness of issues faced by the disenfranchised among us. 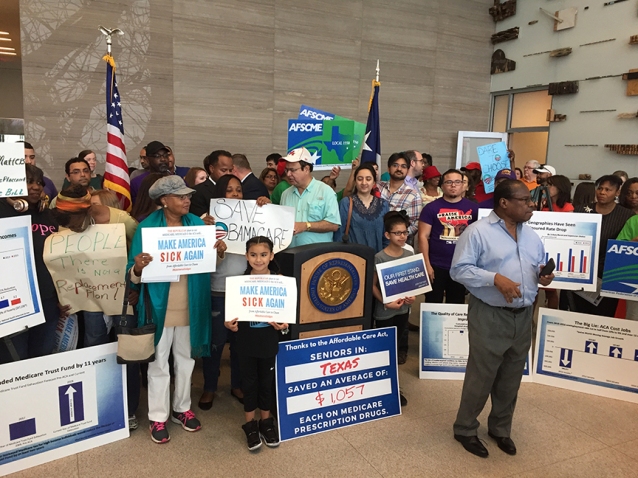 Loved this white Rioja from “Paco’s picks” on the list. What an amazing restaurant. @tracieparzen loved it too. #nokids