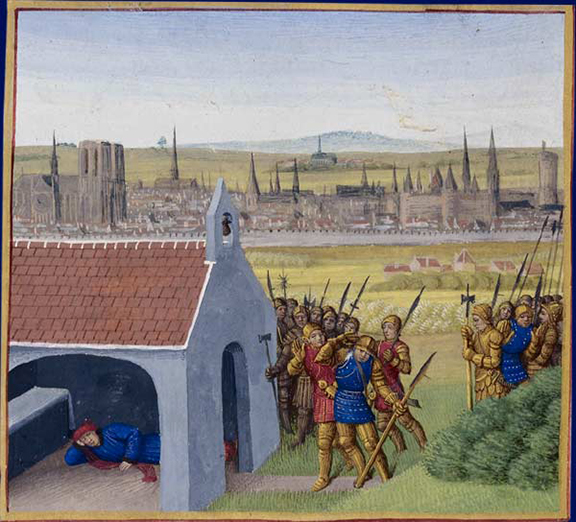 Above: Paris as it appeared around the mid-fifteenth century in a painted manuscript. The panel depicts Merovigian king Dagobert I (603-639 C.E.; see attribution below) in Saint-Denis (just north of the city’s center). But the image of the “skyline” of Paris is what it looked like in the time of artist fifteenth-century French artist Jean Fouquet.

With hushed tone on Friday afternoon, Tracie P asked me if I had read the news of the siege of Paris when I had wrapped up my work week and turned my attention to our daughters.

We didn’t want to betray our alarm as we furtively glanced at the feeds on our phones, which bubbled over with horrific dispatches from the capital.

Our thoughts turned to an American wine writer colleague and friend who’s currently visiting there; to another friend, a Turkish-German wine educator from Rome who was visiting there.

Our memories turned to our many friends who live there, fellows from my days performing there: in February 2009 Tracie P accompanied me to Paris to play a few shows with my then-active French-language band; over the years, I’ve played guitar in Parisian rock venues on maybe ten occasions.

By Saturday morning, one of the New York Times accounts of the terror began: “a wine consultant and rock music fan, thought the concert he was attending Friday night had simply taken a particularly raucous turn.”

It all hit too close to home for us.

My mind turned (escaped?) to Ariosto’s sixteenth-century epic poem, Orlando furioso, and its chilling account of the siege of Paris by Saracen king Rodomonte. In the now nearly twenty years since I obtained my doctorate in Italian studies, I had forgotten that one of the similes employed by Ariosto in those famous stanzas was viticultural.

In its time and beyond, Orlando furioso was and is of the most influential and popular texts in the Western canon (although we hardly remember it today). When it was published in its entirety in 1532, it was already a blockbuster.

In one of the most celebrated examples of “military poetry” in all of literature (below), Ariosto conveyed the panic, mayhem, and terror of Rodomonte’s siege of Paris through a series of analogies.

The translation comes from David R. Slavitt’s 2010 rendering (Harvard Press; available on Google Play, btw, for less than $14 with tax). The original (from the 1974 Garzanti edition) follows for Italian readers.

Think of a bull, a different one this time,
that has been penned in the square all day and young
children have teased and poked it without rhyme
or reason, and then it breaks out and runs among
the crowd in the street and suddenly all that prime
beef turns into a weapon. Some are flung
up into the air and some are gored…
That was Rodomonte and his sharp sword.

He cut off the heads of fifteen or twenty as though
he were pruning vines and lopping the weak
runners that sap the plant. But there was no
wine but only blood that came from this freak
viticulturist pantomime. His slow
but gory progress through the throng to seek
an egress left arms and heads strewn in the street
so that it hardly seemed to be a retreat.

Maybe I turned to Renaissance Italian poetry to avoid the overwhelming fear and terror in my heart. Maybe I turned to Ariosto because I am unable to come to wrap my mind around the absolute horror experienced by our fellows.

Thank you for letting me share it here. Today, our thoughts and hearts go out to our Parisian sisters and brothers. In a way, Paris belongs to all of us and we to her. As she shudders and weeps, so do we.

See also Gustave Doré’s nineteenth-century illustrations of Orlando furioso, including this panel depicting Rodomonte’s rampage through the streets of Paris.