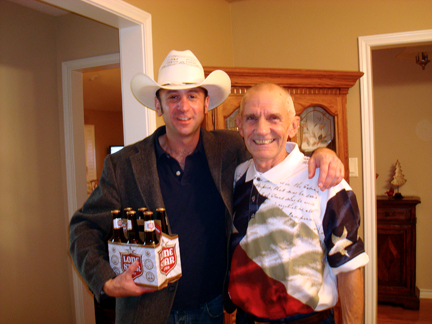 Blogs are about remembering. “Web logs” is what they were called early on. They were and are diaries of their authors’ lives.

Every Memorial Day, I remember Melvin Croaker in the photo (above, right).

Every one in Tracie P’s family made me feel welcome when I first moved to Texas to be with her, to start a new family and a new life together nearly seven years ago now.

On the first Christmas Eve we spent together in East Texas in 2008, Melvin — a close family friend of my now parents-in-law — presented me with a cowboy hat and six-pack of Lone Star beer as he officially welcomed me to Texas.

I still have that hat and I still have one of those six bottles. We drank the others in his memory after he passed away in 2010.

Melvin was a U.S. Air Force veteran. When I wrote about sharing beers with U.S. Marines on their way back from Iraq while Tracie P and I were on our way to honeymoon in 2010, Melvin commented on my Facebook — I remember well — about how important it is to acknowledge their service and sacrifice.

There won’t be any grilling or beer cans popping today at our house. It’s just going to be a quiet day at home for me with the girls and Tracie P.

But today we’ll remember Melvin and all of the men and women who serve and have served our country.

As the Romans used to say, it’s a day to remember and to be grateful… memorem et gratum esse…