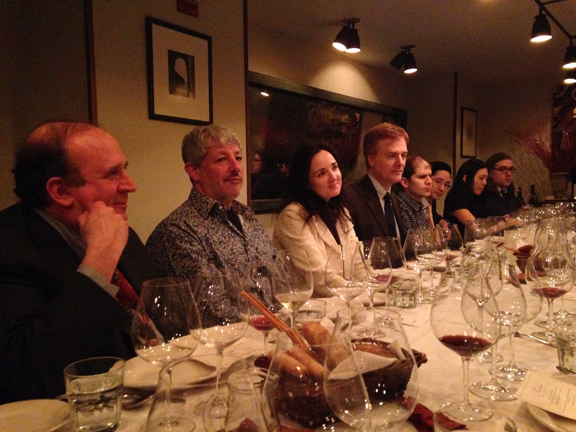 Above: the guests at last Thursday night’s dinner honoring Kerin O’Keefe (center) had some tough questions for her. I really admired her grace in explaining omissions from her new book on Langa wines.

On Thursday of last week, I had the great fortune to attend a dinner in New York honoring wine writer Kerin O’Keefe and her 2014 book on Barolo and Barbaresco (Barolo and Barbaresco: The King and Queen of Italian Wine, UC Press; check out Ed McCarthy’s review here).

I was the guest of my friend Jamie Wolff, co-owner of Chambers Street Wines, who had hosted Kerin for a book-signing and talk at the store.

If you’ve never been to the shop, be sure to check it out the next time your in Manhattan. Beyond the fact that it’s one of world’s most renowned independent wine retailers, it’s also an independent wine lover’s locus amoenus. Honestly, I can’t think of a better way to describe than by means of the Latin. It’s a truly lovely place, a safe harbor for those seeking soulfulness in their wines.

As Jamie writes on the store’s Twitter, “we are committed to stocking the best naturally made, small-producer wines from around the world.” 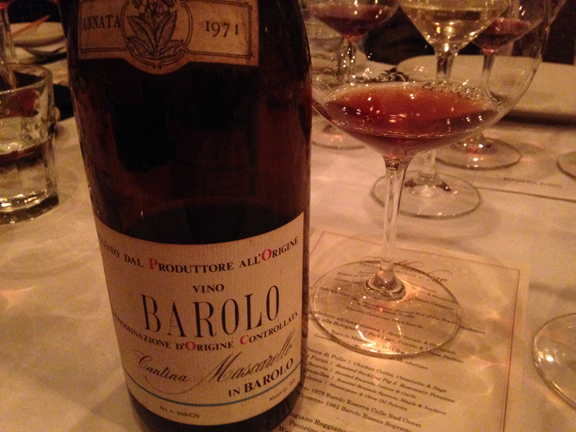 Above: the undisputed champion of the flight was the 1971 Bartolo Mascarello Barolo. It almost seems pleonastic to mention B. Mascarello and Barolo in the same utterance. To my mind, it is the apotheosis of the appellation.

I learned on Thursday night that Jamie’s independent spirit spills over and rubs off — by means of organic osmosis — on his clientele. In all my experience over the years attending dinners and tastings like this, I’ve never come across such a lovely group of collectors, with not a braggart or blowhard in the bunch.

Of course, no event featuring old Nebbiolo would be complete without the sine qua non parsing of the wines’ maturity.

Above: one of the wine’s I was the most excited about was the 1979 Cavalotto Barolo Riserva Colle Sud Ovest. While I’ve tasted older bottles from the other estates represented that night, I’ve never tasted Cavalotto beyond the 1990s. On my Facebook, California legacy retailer Gerald Weisl wrote, “Back in the mid-1980s, Langhe winemakers all conceded Cavallotto’s 1979 was THE best wine of the vintage….glad to know it’s still got it.” This was another standout for me and still has many years ahead of it.

The 1989 Marcarini Barolo Brunate from double-magnum was too young, some grumbled.

But I wasn’t complaining. While the wine’s muscular character dominated the fruit, I thought it was supreme example of Marcarini’s rigidly traditional style. A great wine from one of my favorite vintages (and not just mine).

Above: the 1982 Aldo Conterno Barolo Bussia Soprana was also a real treat for me. Aldo was and is one of Langa’s undeniable greats. But I’ve always found his 1990s to be a bit modern-leaning. This wine danced in the glass to a song that was a hit before your mother was born.

Beyond Kerin and the stellar wines, the other star of the evening was the wine staff at Maialino, where Jamie hosted the dinner.

Even on a day when the snow had fallen from dawn to dusk, the Gramercy Park restaurant was bustling with a full book (as they say in the trade).

But the wine team, led by wine director Jeff Kellogg, didn’t miss a beat. From the presentation of the wines to the service, the execution was truly flawless. Very impressive stuff.

The only disappointment was the 1974 Giacomo Conterno Barolo Monfortino, which never seemed to come into focus — a great wine from an extremely challenging vintage.

With such a bounty of fabulous and (arguably) mature expressions of Nebbiolo, it was Nature’s way of reminding us on a wintry night in Manhattan that there would be no yang without the yin.

My goodness, Jamie, thank you… thank you. Your generous spirit is rivaled only by the soulfulness of your selections. I can’t tell you how much I cherish our friendship and conversations.