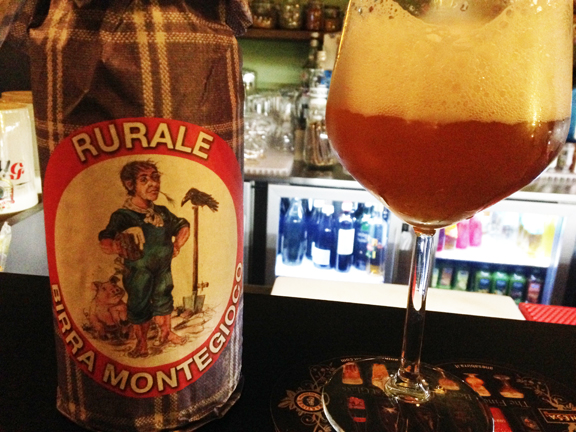 Anyone who’s ever attended the annual Italian wine trade fair, Vinitaly, in Verona, knows that after a day of tasting wines nonstop, you crave beer. I’m not sure why this is. But it’s widespread phenomenon among trade people who are tasting and spitting wine all day at the fair.

This year, my fair was more about schmoozing than it was about tasting but I still managed to get in 40-50 wines every day I was there (in years past, when I would go on buying trips, I would taste up to 90 wines a day, spitting all the while, of course).

By the Tuesday night of the fair, our palates were completely fried. Our teeth were stained purple and our gums were numb from tannin.

So Giovanni and I decided to go out for a beer and burger in Brescia, where I was staying and where he lives.

A lot of folks don’t realize that there is a beer and brewing renaissance happening in Italy right now. Artisanal beers, natural beers, “extreme” microbreweries, and a lot of downright delicious beers. 32 Via dei Birrai is probably the most well-known label in the U.S. But in Italy, there are literally hundreds and hundreds of microbreweries that find their way to market.

I really loved the Rurale by the Birrificio Montegioco (from the village of Montegioco in Alessandria province, Piedmont). It showed a wonderful balance of citrus and herbaceous notes with a peppery finish. It had rich texture and an overall wholesome character that really took it over the top for me.

It paired beautifully with the Hamburger Rustico at the Bar Torre d’Ercole in the historical center of Brescia.

I’ve written about the new wave of hamburger mania in Italy today.

Milan may be its epicenter. But Brescia, where the quality of beef is marvelous and where locals love to indulge in steak and hamburger, is another flash point in the Italians’ burger mania.

The quality of this beef was great and it was perfectly grilled: crunchy on the outside, with a charcoal note; rare to medium rare inside with just the right amount of fat to keep it juicy and tasty.

The rustico at the Bar Torre is stopped with melted cow’s milk cheese (I’m not sure which Lombard cheese it was), arugula, and onions that had been caramelized with juniper berries.

Bacon is optional and the server asked us if we wanted “bacon,” using the English term even though we were speaking in Italian.

The Italian beer revolution actually began more than twenty years ago in the Veneto (I remember well because I was touring with my cover band there then).

But even five years ago, it would have been difficult to find a burger of this quality in Italy.

All in all, a great way to end another long day at the fair with one more day to go.

I’ll start posting on the wines I tasted tomorrow, I promise!

Thanks for reading… Buona Pasquetta, as the Italians say! Happy day after Easter!