Love the earth and sun and the animals, despise riches, give alms to everyone that asks, stand up for the stupid and crazy, devote your income and labor to others, hate tyrants…
—Walt Whitman
preface to Leaves of Grass

Above: Primo Franco stops to chat with a Prosecco grower in Cartizze.

Spring has come early to Proseccoland (as it has across Italy). And as I drove from Cison di Valmarino (where I stay with my good friends at the Villa Marcello Marinelli) to Valdobbiadene yesterday, I saw many grape growers cutting the grass between the rows of their vineyards.

In other vineyards, there were brown stripes between the rows: they demarcate the use of a crop dessicant (or defoliant), a form of herbicide.

For every “green” vineyard, there seemed to be a “striped” vineyard, as it were, on either side.

Last year, Alfonso wrote about the “Battle for Prosecco” (a post I highly recommend): with each passing vintage, it seems, that struggle and the challenge to preserve what is unique and wholesome here only intensifies.

As legacy Prosecco producer Primo Franco (above) noted as we drove back to the Nino Franco winery after lunch yesterday, the use of desiccants in the vineyards results in the effetto saponetta or bar of soap effect: when the grass is killed by a dessicant and a crust of dead leaves of grass is formed and as result, the soil absorbs less rain water.

Primo stopped along the road to praise a grape grower who was trimming his grass by hand, unlike his neighbor who had used desiccants (see the photo above).

“My cousin is an idiot,” replied the grower, referring to his next-door neighbor. “I’ve told him not to do it like that. But he doesn’t listen.”

Above: anyone who’s ever traveled with me knows that I rarely drink wine at lunch. But how could I resist a glass of Primo’s San Floriano, my favorite among his crus. The pairing with tagliatelle and asparagus was rivaled only by the pairing with the view from the Ristorante Enoteca Salis in Santo Stefano. The nose on that wine is gorgeous.

As Alfonso wrote in his post last year, there’s a lot of money at stake in Prosecco, where sales have rivaled and even surpassed those in Champagne in recent years.

Prices of land in Cartizze, the most famous of the Prosecco crus, are higher than Napa Valley, one grower told me a few years ago as we sat atop his family’s parcel in the famed designation.

But grape prices, even in Cartizze where only Prosecco DOCG is grown, are now being driven by the fact that fruit costs in the Prosecco DOC, which lies in the Piave river valley below (and beyond), are much lower.

English-speaking end consumers don’t recognize the distinction between the DOC and the DOCG and as a result they generally reach for the cheapest Prosecco on the supermarket shelf.

This phenomenon, which has only expanded in the years since the DOCG was created in 2009, ultimately prompts growers to cut corners in order to compete with their fellows on the valley floor.

And those dead leaves of grass are an expression of that struggle. 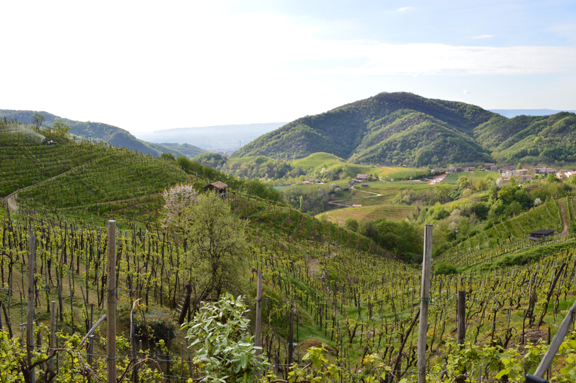 All is not lost in Prosecco and although some battles have been lost, the outcome of the great war has yet to be written.

Primo — a man whom I admire immensely and whose legacy has shaped the tastes of our generation — is fighting a valiant fight.

Last year’s crop was so good, he told me, that he and his winery could have bought fewer grapes for their projected production.

As he stopped along the road yesterday to chat with that grower (above), I couldn’t help but think of the above passage from Leaves of Grass. Primo is this appellation’s Whitman — in more ways than one.

I have so much more to tell about my trip and my Vinitaly tastings. I have just three more appointments to go between today and tomorrow. And then on to Rome for one night before heading back to Texas. Thanks for following along and please stay tuned…

2 thoughts on “Leaves of grass: Primo Franco & the “battle for Prosecco” @NinoFranco1919”

On the blog today, our favorite places to eat and visit in La Jolla. Thanks for letting us share our trip with you. Please consider giving to @unicef Ukraine child refugee relief. Link in bio.