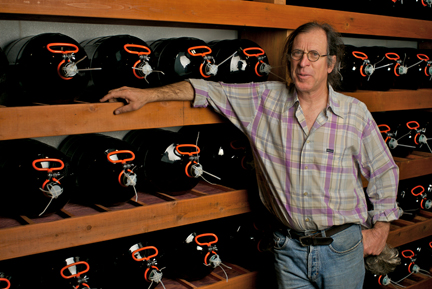 Randall Grahm (above) needs no introduction from me. He’s one of the greatest authors, grape growers, and winemakers of our generation and he’s also one of the most lovely and fascinating personages I’ve ever had the opportunity to know. His erudition, humanity, and love of paronomasia are models for my own writing and I was thrilled that he agreed to do the following interview with me.

Randall will be pouring and talking about his wines at Sotto in Los Angeles (where I co-author the wine list) on Thursday, November 7 (6:30-7:30 p.m. and then talking tableside during the first dinner seating).

Registration is not yet online but you can snag a seat by emailing events@sottorestaurant.com.

I’ll be speaking at the Cantele tasting at the restaurant tomorrow night with my good friend winemaker Paolo Cantele. There are just a few spots left for our event. Please click here for registration and info.

DB: Last week, you tweeted the following: “The reality is Biodynamics cannot be explained scientifically.Yet empirically it works, ergo a practical solution.”

Can you talk about the blurred line between science and the “mystery” of biodynamics? Will we ever have an explanation of why it works? And what is spirituality’s role in biodynamics in America? What prompted the tweet?

RG: The tweet was prompted by Corby Kummer’s post on biodynamics, as he attempted to demystify the practice. As you know, there are still a lot of people who are utterly freaked out by the idea of drinking biodynamic wines, putatively made by superstitious, voodoo-practicing grape growers. I am not a psychologist, but there is something about biodynamic practice – maybe it’s the fact that these people are ingesting the final product in their bodies – that creates a sort of fear of contamination for them, or maybe they fear that they themselves might begin acting irrationally. It’s seemingly crazy – why should people be threatened by the fact that a grower is not applying synthetic pesticides and fertilizers to his plants? – but there you go. I’m fairly certain that we will not have an explanation of why biodynamics works in our lifetime. Western science has not yet really gotten a handle on the notion of subtle energetic forces – I think this may have to wait till the 22nd century. Of course there have been and are a number of theoretical physicists who speak to the correlation of spirituality and science, but they are still pretty marginalized. There is certainly a major taboo among scientists to broach the idea of spirituality; it would appear to fly in the face of the scientific method. But spirituality is really at the core of biodynamics; many practitioners will deny this, hoping not to scare away potential customers. But to really practice biodynamics properly, there is the need to do quite a bit of internal work. (I’m not a very rigorous practitioner in that regard, but aspire to some day be.)

You were among the first U.S. winemakers to list all the ingredients of your wines on the label. What feedback have you seen? Are other winemakers following your lead? Do you envision a day when all wines will be labeled like this?

There have been only two wineries that I know about that have followed our lead – Shinn Vyd. in Long Island and Ridge Vineyard in our neighborhood. We’ve mostly had quite positive feedback from our customers and certainly from the wine press, but I think that these days we are living in the age of information overload, and I’m not really sure that consumers have really processed the import of what we are proposing. It is my cynical conclusion that while there is certainly a small percentage of individuals who are very keen to know precisely what goes into their food and wine, the vast majority are likely pretty indifferent. (Are these the same people who are also indifferent to being listened in on by the NSA?) I really think that there are a lot of good reasons to be curious about what goes into your wine, from health considerations, to religious/philosophical (Do you know that gelatin is a licit additive?), to simply becoming a better educated wine drinker. If you learn more about particular additives and their levels of use, you may well find that you are responding positively or negatively to their presence or absence. This will presumably enable you to have a better shot at predicting the wines that you might prefer in the future. Eventually ingredient labeling will happen, but I think it’s a little ways away.

You are perhaps the most politically and aesthetically engaged winemaker working in the U.S. today. Do you see your wines as an ideological expression? Do social consciousness and conscientiousness play a role in your grape growing and winemaking?

Spoken like a true academic and thank you for the somewhat undeserved compliment. I am certainly aesthetically and philosophically engaged to a very great degree, but not sure that I have as yet developed a mature political consciousness. I’m not sure that most wines can be thought of as an ideological expression unless certain conditions obtain; you need to have the rudiments of a for-profit business to be able to continue to do what you do, to refine/purify your practice. The reality is that making wine is still a métier and unless you have independent means, you have to make a living. As such, unless you are particularly clever and lucky, you (or maybe should just say I) are always compromising, unless you can become so good that you have the luxury of not having to compromise. (Unfortunately, I’m not quite there yet.). It utterly kills me to make a blend that is in any way less than the best one I can make. It kills me to buy grapes that are not grown biodynamically or even ones that come from irrigated vineyards. But that is what I am compelled to do for now to my great chagrin. I just have to continue to remain focused on the ultimate goal and be fully conscious of the compromises that I’ve made.

Your legacy as a winemaker, historically, is rooted in your passion for and knowledge of the wines and grape varieties of Rhône. But in more recent years, your interest has shifted to Italian grape varieties. What prompted your gaze to fall on the other side of the Alps, so to speak?

It is time, indeed well past time that I become a full-fledged vitizen of the Universe, or to put it another way, I’m really not so interesting in being a Rhône Ranger or really any kind of Ranger who is working in a derivative style, i.e. attempting to do his miserable best to emulate a European prototype. The real question is what can be done (or Doon) to produce absolutely original wines in the New World, that are reflective of place. I have a slightly dangerous Utopian world-view of a world beyond grape varieties, where varietal character has become subordinate to the expression of terroir. I think that varietal wines still have a tremendous place in Europe or in areas where they’ve had a chance to become perfectly matched to their growing conditions. But I think that making varietal wines in the New World is pissing in the wind.

Please tell me more about your new Nebbiolo. Where are your growing the grapes and do the sites have an affinity with the classic zones for Nebbiolo in Italy?

Honestly, the Nebbiolo that we produced from our former vineyard in Soledad was as much a matter of great luck as anything else. Soledad is an utterly miserable place to grow grapes, the soils there are not particularly distinguished, and so many of the attributes of the sites work explicitly against the expression of terroir. Despite these enormous disadvantages, we produced some pretty kick-ass Nebbiolo. Go figure! We have a beautiful little limestone knoll in San Juan Bautista that would possibly be just perfect for Nebbiolo, but as I’ve learned, you can dream the most vivid dreams. Until you’ve somehow tested them on (or in) the ground, it’s still just foggy vapor.

One thought on “Vitizens of the Universe unite: @RandallGrahm interview”