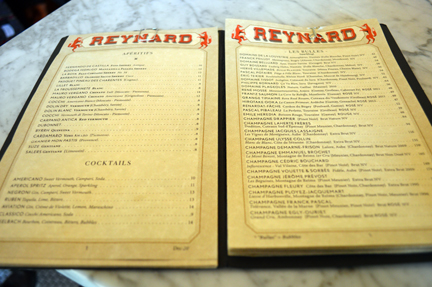 The brunch crowd had only just begun to roll in on Sunday when I arrived at Reynard at the Wythe Hotel, the much talked-about Natural wine junkie hangout (that set into motion a series of posts last year on wine lists that silver-haired dudes can’t understand).

The clientele grew more cosmopolitan as the room filled up with hotel guests and a hip Williamsburg eisteddfod.

But when I got there, there were just three ironically bearded,* heavily tattooed men sitting at my corner of the bar. They were reading books. In the case of the man sitting next to me, he was reading Orwell (and although he did tell me that his omelette was “good” when I inquired, he was otherwise uninterested in engaging in conversation). Two of the men wore knit caps. 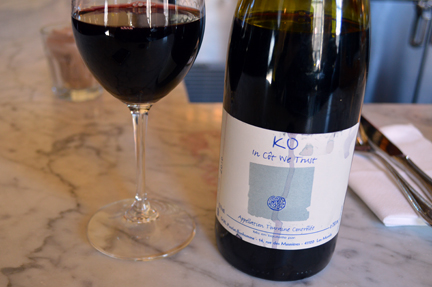 I ordered a glass of the In Côt We Trust by Puzelat and the burger (rare), as I marveled at what is a dream list for people like me and my crowd, folks who love and seek out Natural wines from France and grower Champagnes. If I still lived in New York, I’d probably move to Williamsburg just so I could hang out there regularly: the space is Parisian bistro, the food was fairly priced and well prepared, and my server was professional, polite, and informed (he also had an ironic beard and a lot of tattoos).

My only lament would be the list’s Francophilia. I only spotted two Italians (the Coste Piane Prosecco [Colfondo] in magnum would be a great bottle for a party of four or more).

And I wonder if the people who dine there truly appreciate the extraordinary list. Does Côt pair well with Orwell? I guess I’ll never know.

When I stepped outside and I headed back to the train, I found myself in Lena Dunham’s gaze, as she looked down on me from a oversized billboard for her show “Girls.”

As I aimlessly wandered the streets of Williamsburg, amid tourists who followed maps in guides to the hippest locales, I couldn’t help but wonder, does life imitiate art or art imitiate life?

Aaaa, it doesn’t really matter, does it? As long as the Côt is crunchy and the burger juicy.

* What’s an “ironic beard”? It’s a beard that was not grown and groomed in earnest. Rabbis, for example, have “earnest beards.”

One thought on “Reynard in Williamsburg pretty freakin groovy #NewYorkStories”