Heading to Los Angeles today where I’ll be working the floor (introducing our summer wine list) at Sotto Wednesday and Thursday nights and speaking tomorrow on a panel at the Italian wine fair for consumers and trade, Viva Vino. LA is buzzing right now with the arrival of the group of winemakers from Oslavia (Friuli) led by the young Saša Radikon, whom I’ll be meeting tonight. So I thought I’d post my photos from my visit to the winery a few years ago. Look for Saša and the Oslavia producers at DomaineLA on Thursday.

The skin-contact Ribolla of Radikon first came to my attention in the late 1990s in New York in an era long before the terms “orange wine” or “natural wine” were in vogue. Stanislao Radikon (above with wife Suzana) was the first to experiment with skin-contact starting in the mid-90s. (I highly recommend this profile from the recent Raw Wine fair in London devoted to the Radikon family and story.)

The village of Oslavia lies literally on the edge of the western world, just across the border from Slovenia in the province of Gorizia (in the Collio appellation). 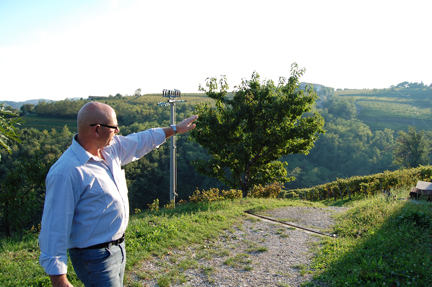 One of the first things that Stanko (Stanislao) wanted to show me was the hill where then Colonel (later General) Badoglio fought the battle of Oslavia, one of the last and most bloody assaults of the First World War (just Google Badoglio and Oslavia to get a sense of the horror evoked by the toponym for a generation that came before us).

Today it is a place of immeasurable beauty, although many of the battle scars remain — topographical and emotional.

Stanko was perhaps the first to recognize the immense tannic potential of Ribolla (above), which, until that time, was used only to make light, white quaffing wine (in much of wine-making Friuli and Slovenia, it is still applied as such, although sparkling wine from Ribolla is becoming increasingly popular).

Open vat fermentation and extended skin contact are among the techniques applied to create Radikon’s long-lived, powerful, yet delicately nuanced bottlings of Ribolla.

Note the unexploded bomb from the First World War in the abandoned farmhouse where Stanko built his new cellar in 2002.

One of the things that impressed me the most was the contrast between ineffable rural beauty and the memory of carnage and senseless sacrifice that linger there. Stanko is a quietly intense man whose soulful winemaking is as much an expression of ideology as it is a pure and natural product of his land.

One thought on “Radikon, my visit to Oslavia”

Thank you @alicialini for the wonderful wine! And amazing to see that old bottle at the winery! Dindo’s family loved the new riserva. And Dindo’s mom made green lasagne for the occasion. Fantastic. So blessed to have a friend in you. Abbraccione.