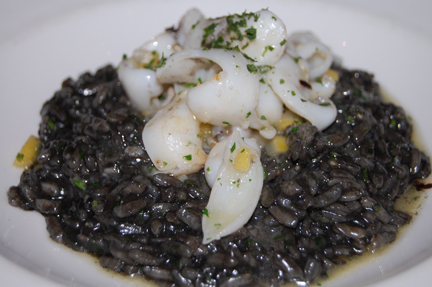 The Cuttlefish risotto at Ciao Bello in Houston the other night was so good that it nearly made me cry.

And it inspired a conversation about the “last taboo” of Italian gastronomy: the pairing of dairy and seafood.

I was at the restaurant doing a media dinner for my friend and client Tony Vallone, who shared the following anecdote about a luncheon in Naples a few years ago.

One of the guests, he said, an Italian-American, asked for grated Parimigiano Reggiano with his seafood pasta. The waiter politely responded that the restaurant didn’t serve cheese with seafood dishes. When the guest insisted, the waiter acquiesced, telling the patron that he would bring him the cheese. He disappeared, only to return after the gentleman had finished eating his pasta. “You see,” he said, “the dish didn’t need the cheese,” adding “in Italia si fa così,” this is how we do things in Italy.

The Italian taboo of mixing dairy and seafood stretches back to the Renaissance, when widely embraced Catholic customs required abstinence from dairy and meat on the numerous Lenten — di magro — days in the religious calendar. The bottom line: when seafood was consumed, dairy and meat were not. (I don’t have time to post about this today but this element of Renaissance cookery came to mind when I read Mark Bittman’s recent NY Times editorial on faux chicken; Renaissance cooks were obsessed with creating faux food, a gastronomic phenomenon that I called “culinary anamorphism” in a piece I wrote for Gastronomica some years ago.)

Of course, Tony’s cuttlefish risotto was made without the use of cheese (even though so many chefs in Italy and the U.S. discreetly fold some grated Parmigiano Reggiano into their seafood dishes). The secret to its creaminess? Tony had his chef caramelize and emulsify onions and then add them a few moments before the rice (Carnaroli) had cooked through. The viscous liquid gave the dish the all’onda texture that Tony likes in his risotto (whether sea- or landfood). 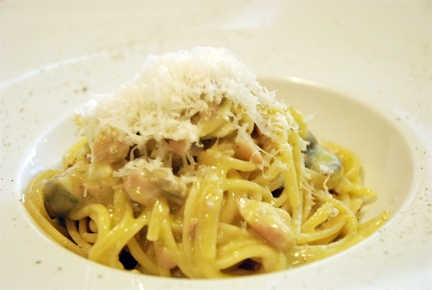 And it seems that we weren’t the only ones thinking about the “last taboo” of Italian gastronomy this week.

Aldo notes that more and more Italian chefs are taking the bold step of using cheese in their seafood dishes, calling it their “last prejudice.”

Tony always says that for Italian cuisine to be authentic, it must also be creative. But I don’t think he would ever serve a dish like the one described by Aldo.

But hey, when in Viareggio, why not take a walk on the wildside?