Curating Tony’s website and serving as his media director has its perks. This dinner, in August, was one of them. It’s a tough job but someone has to do it!

From the department of “dreams do come true”… 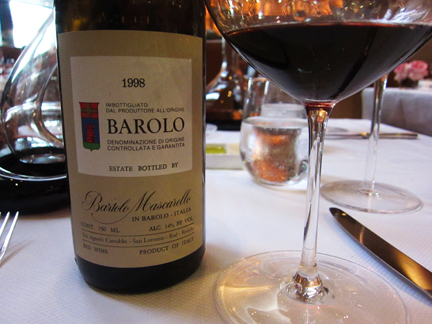 When we sat down for dinner last week, Tony Vallone looked across the table at me and matter-of-factly said, “I have some special wines picked out for you tonight. I know you’re going to like them.” He wasn’t kidding.

I’ve been curating his blog since October 2010 and our weekly meeting has evolved into a familial kibitz where we talk about everything under the sun, alternating between English and Italian. (Long before Tracie P and I announced that we were pregnant, Tony had intuited that we were with child. “I can read it on your face,” he told me. And, all along, Tony said it was going to be a girl. He was right.)

The occasion for our dinner was an interview with one of the top wine writers in the country and Tony had asked me to join them.

After an aperitif of light, bright Colle Massari Montecucco Vermentino, the first wine in the flight was 1998 Barolo by Bartolo Mascarello (above). 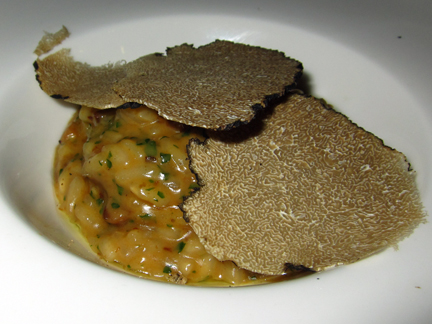 I’ve tasted this wine on a number of occasions and it’s extremely tight right now, favoring its tannin and jealously guarding its fruit.

But when the server arrived with a porcini risotto topped with Umbrian truffles shaved tableside, the wine started to open up and its delicate menthol note began to give way to wild berry fruit tempered by mushrooms and earth. The acidity in this wine was singing and I couldn’t help but be reminded of Angelo Gaja’s antithetical comparison of Cabernet Sauvignon and Nebbiolo. Cabernet Sauvignon is like John Wayne, I once heard Gaja say: he who stands in the center of the room and cannot help but be noticed. Nebbiolo is like Marcello Mastroianni: he enters the room and stands quietly in the corner, waiting for you to approach him. (There’s a punchline that cannot be repeated in polite company.) 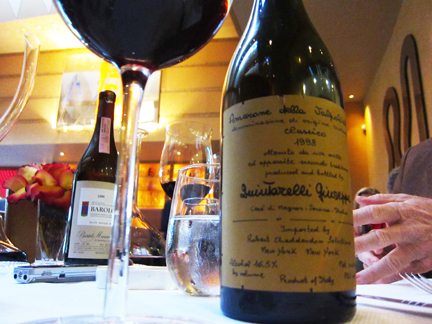 The acidity in the 98 Amarone della Valpolicella Classico was equally vibrant and its melody played a counterpoint against the delicately marbled fat of a Kobi fillet. While I’m sure that the 98 Quintarelli has many, many years ahead of it, this wine is in a moment of grace. Generous fruit set against rich structure and mouthfeel. Here, I couldn’t help be reminded of Cassiodorus’s description of Acinaticum: “On the palate, it swells up in such a way that you say it was a meaty liquid, a beverage to be eaten rather than drunk.” In this wine, meaty ripe and overripe red fruit alternated with savory flavors. An unforgettable wine in one of the most remarkable moments of its life. 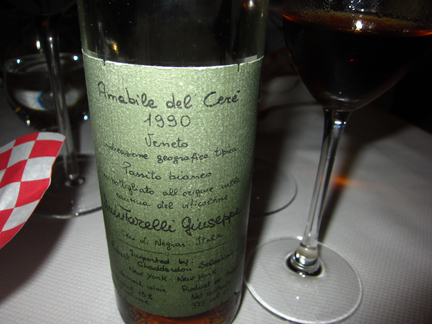 And dulcis in fundo, Tony had selected a wine that he had seen me covet. A few months ago, a collector and frequent guest of Tony’s poured me a taste of the rare 1990 Quintarelli Bandito (I wrote about it here). Knowing that I longed to “drink” this wine in the context of a meal, he surprised us at the end with a 375ml bottle. This wine — last bottled by Quintarelli for the 1990 vintage — is one of the greatest expressions of Garganega I’ve ever tasted: rocks and fruit, minerality and stone and white stone fruit, dancing around a “nervy backbone of acidity” as the Italian say.

This was paired with some housemade zeppole and a dose of playful nostalgia.

2 thoughts on “Best meals 2011: Quintarelli and Mascarello at Tony’s (Houston)”