Last week, when I attended the John Mariani dinner at Tony’s in Houston (where John spoke about and signed copies of his new book How Italian Food Conquered the World), I had the great fortune to taste one of Quintarelli’s rarest wines, his 1990 Amabile del Cerè “Bandito” (thanks to a guest at Tony and John’s table).

This dried-grape white is made from the same blend that goes into Quintarelli’s dry white: “mostly Garganega with Trebbiano Toscano, ‘Saorin’ (Tocai), and Chardonnay and Sauvignon Blanc in small quantities,” wrote Francesco Grigoli, Quinatrelli’s grandson, in an email the other day. The wine is made in extremely small quantities and the last vintage bottled was the 1990. It’s only made in exceptionally good vintages, said Francesco when we visited him in February. 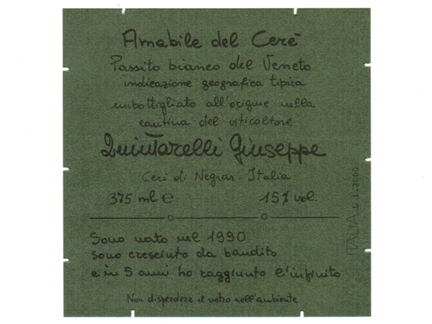 While the 375 ml bottle at Tony’s didn’t report the poem that accompanies the 750 ml bottles of this storied wine, Francesco was kind enough to scan a label and send it to me.

The poem, composed by Quintarelli himself, reads: Sono nato nel 1990, sono cresciuto da bandito e in 5 anni ho raggiunto l’infinito (I was born in 1990/and was banished at birth/and in 5 years I reached infinity).

According to the Quintarelli family, the wine was made for the first time during the second world war and was hidden away out of the Germans’s sight (remember that the Valpolicella was a fascist stronghold and after Italian liberation in 1943, the fascists and nazis established the Republic of Salò on Lake Garda, not far from the Valpolicella). When the wine was recovered, the Quinatrellis were rewarded by their patience.

At nearly 21 years from its harvest and with 16 years of bottle aging, this wine was fresh and bright, with delicious nutty and caramel overtones, ripe apricot and peach flavors and aromas, and breathtaking minerality. One of the greatest wines I’ve ever tasted. (There are a few bottles left at Tony’s, btw, but for big spenders only!)

The most exciting news to come from Negrar is that next month, Quintarelli will be bottling the 2003 Bandito — nearly 8 years after it was harvested. A truly rare wine, from one of the world’s greatest producers.