Friends, wine lovers, and fellow rockers: if you’re not already following my band Nous Non Plus on Twitter, I’d be greatly obliged if you would follow. Thank you! 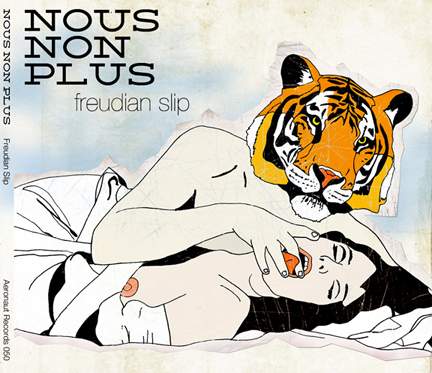 Earlier this week, I got a call from the A&R dude at our record company to write some copy about the first single, “Bunga Bunga,” to be released from our upcoming full-length album, Freudian Slip (in stores October 11). Usually Jean-Luc writes the copy for press releases etc., but in the light of my Italophilia, they asked me to take this one.

Yesterday, we found out that the video and the song will be hitting ITunes on September 13. I can’t share the song or the video just yet but here’s what I wrote, together with one of my favorite photos of Berlusca.

Bunga Bunga: Italian (and now international) slang for sex party, political corruption, and moral bankruptcy, probably from a European onomatopoeic approximation of the beating of drums (cfr. “bongo, bongo, bongo, I don’t wanna leave the Congo,” a line from the song “Civilization” as performed by the Andrew Sisters and Danny Kaye); also used to denote a dance craze created by the faux French rock band Nous Non Plus on their 2011 album Freudian Slip.

Today, Italy’s sitting prime minister stands accused of paying Ruby for sex while she was still a minor (she recently turned 18) and could face up to 3 years behind bars. In Italy, consensual sex is legal at 14 years of age but it’s illegal to pay for sex with a minor.

Since the Rubygate scandal broke in early 2011, the expression Bunga Bunga has become synonymous with Berlusconi’s legendary sex parties, held in his villa outside Milan. And as Italy and the rest of Western Civilization slide into seemingly inevitable decline, Bunga Bunga resonates with Europeans and their trans-Atlantic counterparts as a metaphor for the moral bankruptcy of the European Establishment. The sex-for-hire charge is the latest in a long series of indictments leveled at Berlusconi for tax evasion and bribery. He has never been convicted.

It’s unlikely that Berlusconi’s (formerly) close friend and confidant Qaddafi whispered Bunga Bunga into the prime minister’s ear. In fact, as the Atlantic Monthly recently reported, the expression was probably first uttered by “Berlusca” and his countrymen as a racial epithet mocking the tide of north African immigrants who have settled in Italy. It’s hardly a surprise that the prime minister, infamous for his greed and hedonist excesses, proudly uses the notion of Bunga Bunga in the art of seduction. He is well known for his overt racism and his myriad racial gaffes (when Obama was elected as president of the U.S., Berlusconi noted, “I like him. He’s handsome and tanned”).

In the band’s homage to the Motown classic “Dancing in the Streets,” singer Céline Dijon brilliantly weaves together the world’s capitals, including some you might not expect, reminding the listener with each chorus that on fait le Bunga Bunga (everyone is doing the Bunga Bunga). And from the opening stanza, it’s clear that Dijon’s ingenious conceit is laden with social and political subtext and allusions to current events:

The song’s pulsing sequenced drums (created by Julien Galner of Paris-based electronica band Château Marmount) recall the alcohol-fueled discotheques of Europe and the drum beat of Mother Africa. And its anthemic chorus is a battle cry for disenfranchised and disillusioned youth across the world.

3 thoughts on “Our love song to Berlusconi: Bunga Bunga”