Above, from left: Importer of Basque, Spanish, and French wines André Tamers, Vino Vino owner Jeff Courington, and Tracie P at a Txakolina tasting in Austin on Saturday.

When I moved back to California from New York, a lot of concerned friends asked me, “what will you blog about? what will drink in California?” When I decided to move to Texas nearly two years ago, people admonished: “there won’t be anything interesting for you to drink there!”

Above: My favorite in the flight was the Ameztoi Txakolina, so bright and fresh in the glass, with white fruit and spice on the nose and in the mouth. Low alcohol and gentle spritz. At under $20, the wine quickly shot up the charts to reach a top-five slot in my favorite wines of summer.

Over the weekend, Tracie P and I attended a fantastic Txakolina tasting, hosted by André Tamers (the wine’s main proponent and Svengali in this country) and Jeff Courington, my client and friend, owner of the best little wine bar in Austin, Vino Vino.

Like manna from heaven, my sheer enjoyment of reading Eric the Red’s recent article on Txakolina was redoubled with a flight of the wines, poured personally for us by the dude who is making the synonymous Txakoli and Txakolina (pronounced CHAHK-oh-lee, CHAHK-oh-LEE-nah) household words here in the U.S. 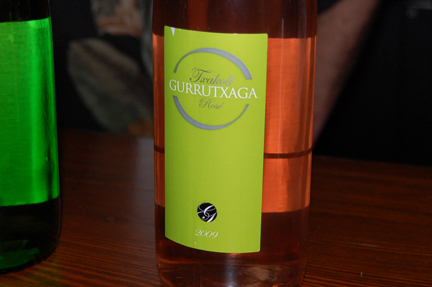 Above: I also really loved this rosé by Gurrutxaga. It had a crazy spicy note on the nose and was wholly sexy in the mouth. A truly and utterly “original” wine on my palate.

The world of wine is encyclopedic in breadth and I am constantly reminded that, beyond my love affair with Italian wine, there are so many fantastic wines to learn about, to taste, to pair with… now, more than ever, thanks to small importers like André, who launched his company more than 10 years ago when he was living with his wife and painting (oil on canvas) in Spain.

Txakolina is a truly “original” wine, to borrow a phrase I once heard Angelo Gaja use in a speech. Like Nebbiolo from Langa or Chardonnay from Chablis, it could be made in no other place in the world. It tastes of the place where it is raised and the people who make it. (Again, please see Eric the Red’s recent article on Txakolina for a great profile of the region, the people, and the wines.)

Being the self-appointed philologist of the enoblogosphere, I couldn’t help but nose around the interwebs in a search for the meaning and origins of the name Txakoli (Chacoli in Spanish, also spelled Sakoli). The lemma txak seems to denote small or little from what I can find in Basque language dictionaries available online. The editors of the Diccionario vasco-español-francés (Alfred Mame et Fils, Tour, 2 vol., 1905-1906) often translate the term (which appears in numerous instances in the two tomes) as vinaza (Spanish) or petit vin (French), literally, little wine, akin to the Italian vinello, an easy-drinking, light-bodied wine. According to the dictionary, the term also is used to denote wine must used to obtain distillate.

Above: Tracie P and I munched down an entire plate of Chef Esteban’s excellent fresh Manchego, dressed with basil, roast peppers, and olive oil. A sublime pairing with the Txakolina.

Beyond the great music and people here, the Texan lifestyle and the fact that the love of my life loves this town, Austin is such a great city because it attracts some of the brightest and best people I’ve ever met. Txakolina is sold in 26 states. Texas is one of them. When I asked André why he flies here especially to attend the tasting (now in its second year), he told me “because Jeff [owner of the venue] is a friend.”

The whole world may be talking about the wines of the Basque country these days. But here in Austin, we’re drinking it!