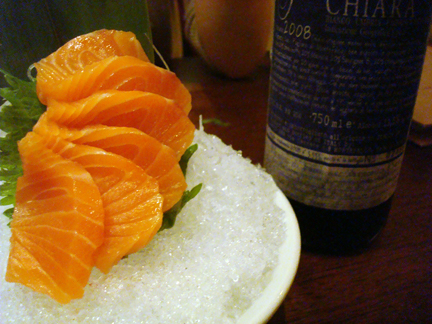 Above: We paired 2008 Santa Chiara by Paolo Bea Saturday night with our sashimi et alia at the new Uchiko in Austin (friends and family soft opening). Not to be down with the dogma, but few would argue with the street cred of this natural wine. (Are you following the 32 Days of Natural Wine?)

Tracie P and me paired some Italian with Japanese on Saturday night during the soft opening (ongoing) at Austin’s new Uchiko, offshoot of the wildly successful and popular Uchi. The 2008 Santa Chiara by Paolo Bea — with its saltiness, crunchiness, and acidic nervousness (to borrow a phrase minted by Scott) — was brilliant with the myriad flavors that flowed like a red tide over our tongues.

Do you need me to tell you that the food at Uchiko was great? Nah… everyone knows why the Austinite Uchi brand has enjoyed such favor in this city on a river. In fact, the Uchi (now) family of restaurants stands apart as one of the few truly world-class dining destinations in Central Texas (beyond the apotheosis of barbecue in the form of a small Texas town known as Lockhart).

Above: Tracie P and me with the reigning “best sommelier in Texas” June Rodil (center).

What I am here to tell you is that the truly amazing June Rodil has put together a simply faboosh list there, with wines from the Jura, from the Loire, from Italy, and even some interesting Californians that might surprise the Cabernet-loving patron who thinks that Silver Oak goes with just about everything.

We had a fantastic time and awesome food and wine Saturday night, with great service (despite the kinks yet to be worked out in this newly christened kitchen).

But the best part of the evening was listening to 80s hits when we got home and Tracie P’s karaoke performance of Whitney Houston’s “How Will I Know,” complete with television remote control microphone and air guitar solo…