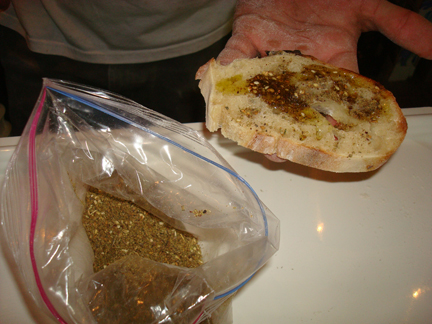 Above: This is not marijuana. It’s za’atar, a traditional Arabic spice mixture, not only delicious but with magical — miraculous, I might say — properties.

Tracie P likes to tease me: “I can’t take you anywhere,” she laments with a grin on her face, without me striking up conversation with the sommelier, chef, or in this case, the pizzaiolo.

To celebrate our wedding, my friend and client Julio Hernández and his lovely wife Lauren took me and Tracie P out to try a new Italian restaurant and pizzeria on Congress Ave., Quattro Gatti. After taking a bite of my pizza (which was delicious, see below), I couldn’t help compliment the pizzaiolo, whose wood-burning oven was an earshot from our table.

In what was a true una faccia, una razza (one face, one race) moment, he beckoned me over and offered me a taste of his za’atar. The traditional Arabic spice mixture, he said, should be sprinkled over toasted bread that has been drizzled with olive oil. Not only is it delicious, he noted, but it also helps to stimulate the digestion. How can I say this? Let’s just say it helps with your daily “miracle.” 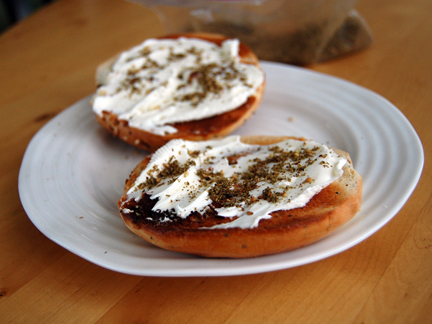 Above: Arabs sprinkle za’atar over a pizza crust or over toasted bread. Being an Ashkenazi Jew, I sprinkled mine this morning over cream cheese spread on my toasted bagel.

Pizzaiolo Melad, an Iraqi raised in Syria, was too kind: he sent me home with a baggie (I can’t resist the term) of za’atar for me and Tracie P to enjoy with breakfast. And I’m here to tell you folks, it works! ;-)

The other good news is that the pizza at Quattro Gatti is fantastic. 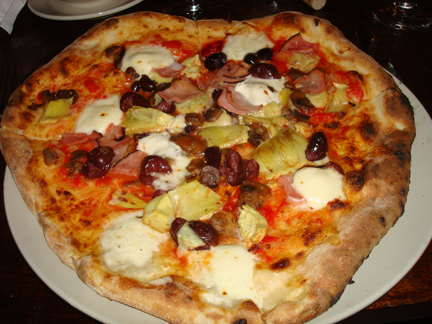 Above: We’ll definitely be returning to the newly opened Quattro Gatti for the pizza (that’s the Quattro Stagioni, above). Located smack-dad in the middle of downtown Austin, this place is sure to be one of the hottest tables during the upcoming SXSW music festival. The wine list was more-than fairly priced.

Owner Gianfranco Mastrangelo hails from Campania via Manhattan and he knows his pizza. We loved it: the crust was savory, firm to the bite on the outside, and slightly moist and chewy toward the center of the pie (and his house-baked bread was excellent, as well).

A Neapolitan, an Arab, and a Jew walk into a pizzeria… and the Jew leaves with the za’atar…

Thanks for reading and buon weekend, ya’ll!

10 thoughts on “This is not marijuana: it’s za’atar (and great pizza in Austin, yes, in Austin!)”