The rain has finally started to fall in NYC and the city has turned grey as it does every year around this time. My heart is heavy and my life unsettled but I am trying to pick up the pieces in the wake of this summer’s tsunami.*

Ben Shapiro — an old buddy, a great drummer, and radio producer, cinematographer, and journalist — wrote me the other day and we made a date to check out one of the many new downtown places.

I wasn’t inclined to like Gemma. I figured it would be another Da Silvano, Morandi, etc. rip-off, yet another Disneylandish, faux trattoria. And frankly, The New York Times food critic Frank Bruni wasn’t too off the mark when he wrote that Gemma is “a cheat sheet of a restaurant whose proprietors take fewer risks than a hurricane-insurance agent in Nebraska.” 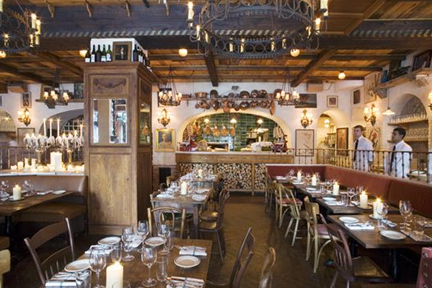 Above, you’ve seen it before: faux trattoria chic. It’s like dining in Fantasyland… Europe via Anaheim.

So, when I arrived (shortly before Ben), and sat at the bar where I chatted briefly with NYC restaurateur Chris Cannon (my only pseudo-star siting), I decided to get right down to business.

“Do you have any white wine that doesn’t see new wood?” I asked the bartender. And I was pleasantly surprised when he said, “Yes, of course, I’ve got a beautiful stainless-steel Sauvignon.”

He proceeded to pour a fresh and delightful 2006 Sauvignon Blanc by Poggio Salvi (who makes both barriqued and traditional wines, btw). You don’t commonly find bartenders with such wine knowledge in places like this, let alone someone who can appreciate that there are those of us who don’t like oaked wine. (In his column this week, The New York Times wine critic Eric Asimov pointed out rightly that “Oaky may be bad, but oak is good.” I may have tempered that by saying “but oak can be good.” Nonetheless, I was glad to see such a widely read authority like Eric tackle such a sticky subject.)

Ben arrived and we decided to let our bartender order for us: excellent Quattro Stagioni pizzas and a simply gorgeous bottle of 1999 Brunello di Montalcino by La Torre, a winemaker you don’t see very often in the U.S. (I remember it from my days in Bagno Vignoni where I first learned about Brunello nearly twenty years ago with my friends, the Marcucci brothers). Traditional in style, this wine had natural fruit on the nose and in the mouth, bright acidity and tannins that probably could have used a few more years in bottle. Case, our bartender, insisted on decanting the wine for us and the aeration helped it to open up.

Above: the Quattro Stagioni pizza at Gemma, I have to say, was among the most authentic Italian pizza I’ve had in NYC. The crust was light but crispy and firm, the topping savory but not overly salty.

Truth be told, the list at Gemma isn’t exactly overflowing with wines that I like (at the end of the night, one of the sommeliers poured us a barriqued Aglianico del Vulture that tasted like industrial coffee syrup). But there are some true gems at Gemma, like a 2006 Verdicchio dei Castelli di Iesi by Villa Bucci (one of my all-time favs).

But what made the night was a great bartender, who knew his stuff and who understood my palate from the moment I sat down. Maybe Frank should have eaten at the bar.

Above: Case Newcomb, a great bartender and this man’s best friend at Gemma. Pour me some Brunello and I’ll tell you some lies.

*This old earthquake’s gonna leave me in the poor house.
It seems like this whole town’s insane.