We drove this morning from Vosne-Romanée to La Rochelle, a journey that took us back up toward Paris on the A6, then over to Orléans, and then on the A10 to Tours and down to La Rochelle (not far from Bordeaux).

The trip took us through the “heartland” of French agriculture and then through the Loire Valley, where we could see signs for (but could not stop at) Chinon, Saumur, etc.

Just outside of Tours we stopped for gas at a rest stop and by chance we happened upon the other members of Nous Non Plus.

We were met in La Rochelle by our handlers Pierre and Pascal from Scène et Public, our agent for France and Europe, who had booked us at the Francofolies festival. After a long day of traveling, everyone was hungry and Pascal was raving about the catering tent behind the mainstage. We checked into our hotel and made our way through La Rochelle, which was in full party mode, with musicians (buskers and festival performers) everywhere.

When we arrived at the tent, even the French among us (including Patrick Woodcock of Mellow, Céline Dijon’s boyfriend) agreed that the spread was the best “catering” they had ever seen at a music festival: summer salads, freshly shucked oysters, fish loaf (which I loved), couscous, saffron rice, a cheese board… amazing… (N.B.: the French use the American word “catering” which they pronounce KAH-tehr-eeng.)

I was happy to eat a meal lighter than my typical Burgundian repast!

It was also nice to drink something a little less demanding on the palate, like the Provençal rosé they served.

I had a great time talking about wine with Pierre and Pascal. Nearly everyone I meet here knows and appreciates wine, although Pascal is not a fan of Italian wine. The French seem to know only Sicilian wine (and occasionally they’ll tell you that they like Lambrusco). 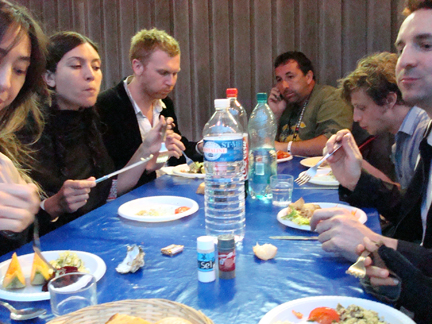 Halfway through dinner, a huge storm exploded over La Rochelle and everyone poured into the main tent to escape the rain. The tent was transformed into a fantastic party (you can imagine). At a certain point, an African group started up a contagious rhythm by banging empty wine bottles on the tables and the whole tent broke out in song led by the group’s lead singer… A smoke-filled tent of happy happy people, their bellies full of wine.

Despite the rain, the festival went on, and I caught the tail-end of the closing set by ex-tennis star Yannick Noah, who closed the penultimate night of the festival on the main stage. Man, that guy can work a crowd…

One thought on “Catering at Francofolies”