One of the best things about what I do for a living is the great wines I get to taste and the fascinating people I get to meet. And one of the most rewarding things about my career is getting to share those wines and those experiences with people I care about.

All of these elements came together week before last when the inimitable Randall Grahm — the Willy Wonka of wine in my view — graciously agreed to do a staff training with the servers at Sotto in Los Angeles where I curate the wine list.

When you work so closely with people as you do on the floor of a restaurant (often in extremely stressful situations), you develop a unique bond with them. And I was thrilled that Randall agreed to come talk to us and sprinkle some of his magic dust on us. 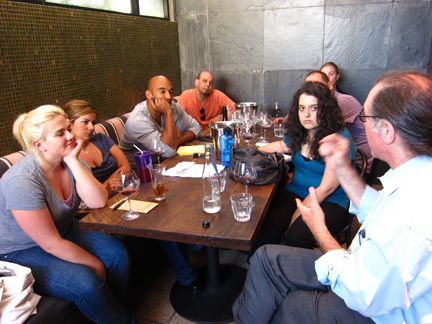 Of all the winemakers I’ve ever met, Randall — a polite and warm man — is perhaps the most erudite. I love the fact that he shares my love of words (philology!) and describes wines in terms of antipodian and podian (his neologism?). I love that he doesn’t mince words (I cannot repeat what he had to say about one antipodian wine). And I love his lyrical approach to describing winemaking and wine. At one point, when I asked him to address reduction in wine and why it’s not necessarily a bad thing. He replied using the follow simile: “Reduction is kind of like the male sex drive,” he said. “It can be ugly but it lets us know that everything’s working correctly and that the wine is alive.” (Reduction can be caused by wine being stored without any contact with oxygen, often the case with screw-cap wines. As a result, the wine may stink briefly when first opened. For the best definition of reduction in wine, see the entry on Jancis’s site — well worth the subscription fee, btw — or see her Oxford Companion to Wine.)

On the edges of our seats, the staff and I were entirely captivated by Randall’s spiel on the spectrum of organic, biodynamic, and Natural winemaking. And we tasted his Syrah Le Posseur together (by the glass at Sotto these days). Le posseur, the pusher in French, was inspired by the way great Syrah is like drug dealer who tempts you with his assortment of aromas and flavors. I love the analogy and I love the affordable and delicious wine (it only gets better with a day’s aeration, btw).

But dulcis in fundo, Randall also shared with us his new hope and faith in biochar — a newly developed form of charcoal that is used to restore balance to the soil. We live in such precarious times, these days (o tempora o mores!). “It is the future,” he said, referring not only to winemaking but also the survival of humankind.

Looking back on our encounter with the ineffably charming Randall, I cannot help but be reminded of the lyrics of one of favorite songs — from childhood to the present day.

If you want to view paradise
Simply look around and view it
Anything you want to, do it
Wanta change the world?
There’s nothing
To it…

Historically and with seemingly quotidian recurrence, Randall seems to seek and find beauty in the world around and in us, too.

This is one of my all-time favorite songs and cinematic moments. I’ll never forget seeing it for the first time and the emotion that filled my chest. It happens, to this very day, every single time… 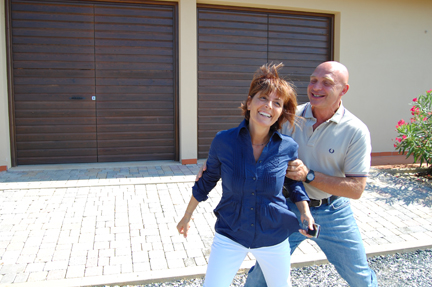 There are few winemakers I know who possess the moral fortitude and spiritual clarity of Cinzia Merli, owner of Le Macchiole (Bolgheri), whom I met for the first time a few years ago when I was asked to interpret for her at a series of wine events.

And there are few human beings on this earth who possess such genuine and pure humanity. And she’s just a lot of fun to be around. 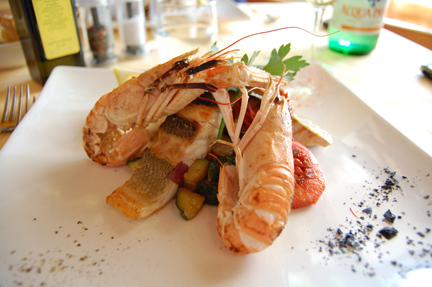 Above: Seafood in Bolgheri (in the upper Maremma) is fresh and plentiful. Cinzia and I had lunch at Nonna Isola (literally, Grandma Island) in Castiglioncello, a wonderful small seaside community, deliciously forgotten in the 1960s.

You certainly don’t need me to tell you about her famous wines, the astronomic scores they’ve garnered, and the regal prices they command. Ubi major minor cessat: Tom Hyland has written perhaps most amply on this winery and it wines. (Check out this post but also see this thread and the many tasting notes.)

Above: I was captivated by the sight of this 60s-era cinémathèque in Castiglioncello. Just imagine all the stories that have played out on and off the screen there!

There are many before me who have told the incredible story of Cinzia’s family: how she and her dynamic husband Eugenio transformed a small family vineyard, jug wines, and a tavola fredda (cold table) restaurant/café into one of the most coveted and collected labels in the world and how he then suddenly, unexpectedly, and tragically left this world for another.

The story not often retold is how the community around her expected her to sell or to fail after the loss nearly ten years ago. In the chauvinist world of Italian wine, few imagined that she would succeed as she has, raising her brand to the highest levels of American and Asian connossieurship and collectability. 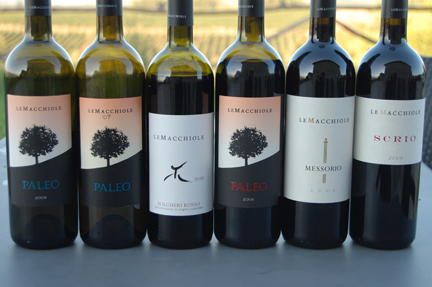 Above: Cinzia often calls her wines her “children.” I got to taste through her current vintages and I am convinced that 2006 was a great vintage for Cinzia and her family. The Paleo (100% Cabernet Franc) was stunning in this vintage. I was impressed also by the acidity and (what seemed to me a) greater amount of Cabernet Franc in the 08 Bolgheri DOC and I wonder if she’s reclassified some of her 08 Paleo (not an easy vintage in Tuscany). This wine might represent the greatest value in a world of wines that I simply cannot afford. Tuscan Syrah is not what I personally or typically reach for but I know collectors will be rewarded by the unusually bright acidity and generous fruit in her sure-to-be-show-stopping 06 Scrio.

The story rarely retold is that Cinzia has achieved indisputable greatness in the world of wine while raising two boys on her own. The loss of her husband left her not only with their wines to look after but also two preteen youngsters, who have both now grown into happy, healthy, handsome young men (the elder has decided to pursue a career in wine).

The gorgeous fall day we had lunch (following a tremendous downpour the previous evening, not a good sign for 2010), Cinzia excused herself from the table to take a phone call. “It would seem that I need to get NASA involved,” said Cinzia, complaining about how long it was taking to fix a broken water heater in her home where she lives with her boys.

On the subject of Tuscan Syrah, be sure to taste Alfonso’s recent reflections on Tuscany.

“After dramatic last-minute machinations, it has just been revealed that the secret ballot to elect the new president of the Brunello di Montalcino consortium revealed that arch-modernist Ezio Rivella of Banfi garnered most votes and will now direct the fortunes of this controversial wine.

Until very recently it looked as though the most prominent woman in Montalcino, Donatello Cinelli Colombini, would win, but at the eleventh hour, in a move that took many by surprise, she withdrew her candidacy and threw her weight behind Rivella. Concerned that this would be the final nail in the Brunello coffin, and that Piemonte-born Rivella would encourage the use of grape varieties other than Brunello (Sangiovese), veteran winemaker Fabrizio Bindocci of the respected estate Il Poggione declared his own bid for the presidency yesterday. …

It seems as though the juggernaut rolling towards the likes of Syrah di Montalcino is unstoppable.”

Above: Yesterday was devoted to a sprucing up of our patio for summer, including the purchase of a grill and the grilling of some pork chops and sausage. Tracie P made her classic penne al pomodoro and an amazing cilantro, avocado, and black-eyed pea salad. Palazzino Chianti Classico — grapey and juicy — paired nicely with all of the above.

When you go to Italy, do you order hamburgers, that quintessential dish of Americana? I know of at least one ex-pat blogger who has probably tried (perhaps inspired by nostalgia?) every hamburger in Rome. At nearly every instance, she emerges bitterly disappointed.

Last week, while working in New York City with some Italian colleagues, I was amazed at one woman’s continued bewilderment at the American convention of tipping. “Why should I tip? Why is it not already included in the bill like in Italy? It said ‘tip’ on the credit card receipt so I thought it was included?” It was a sort of cognitive dissonance: despite my assurance that tipping is a widely embraced convention of the U.S. restaurant industry (where her client hopes to sell its wines one day), she just couldn’t wrap her mind around the thought of leaving a tip.

As St. Augustine once said, in a observation about fasting schedules in Milan as opposed to Rome, when in Rome, order a hamburger.

My bewilderment at her bewilderment came to mind when a friend forwarded me a tweet from a man who needs no introduction here, James Suckling:

Tasted some wonderful Syrahs! 2007 is a great year for Syrah in Tuscany!!

Last week I found myself bewildered at a quasi apology that Mr. Suckling offered for a wine he gave 92 points out of 100 (a hefty score in a world driven by score-based sales revenue): “Not a big wine,” he wrote of the wine made from 100% Sangiovese, an indigenous grape of Tuscany, “but balanced and pretty.”

Thinking of my colleague the reluctant tipper and the ex-pat in Rome who orders hamburgers, it occurred to me that — like Plato’s man in the cave — we all see the world as projected by the lens of our previous experiences.

It makes perfect sense that Mr. Suckling would apologize from the lighter-bodied style of Il Poggione’s traditional-style Brunello since he clearly loves the richer, “big” style of (international grape, traditionally grown in the Rhône valley) Syrah grown in Tuscany. (I know for example that he loves the wines made by my and his friend Cinzia Merli at Le Macchiole, where a 100% Syrah is vinified in a opulent, rich style, definitely a “big” wine.)

In Italian you say, paesi che vai, usanze che trovi. In other words, you will find different customs in every village or country where you go.

Or, in the words of Buckaroo Banzai, Hey, hey, hey, hey-now. Don’t be mean; we don’t have to be mean, cuz, remember, no matter where you go, there you are.