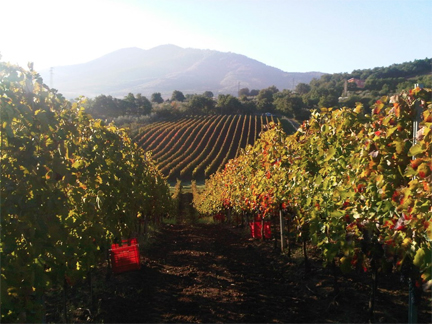 While Tracie P, Georgia P, and I were in Melfi (Basilicata) a few weeks ago, we had the chance to meet and taste with a young producer, Gabriele Ladislao Moccia. His winery, Vigne del Vulture, is new on the scene: a native of Vulture and purveyor of fine food products, Gabriele has been using his contacts in the nordic countries to distribute his wines with great success.

Above: I wouldn’t call Gabriele’s wines classic in style but they are a true expression of the grape variety. Note the dark color and transparency of his 2007, which I liked a lot.

His wines aren’t yet available in the U.S. but I wanted to write a note about them because I believe that Gabriele represents a new trend of young Italian entrepreneurs who recognize the value of authenticity in their wines.

Vigne del Vulture’s wines are a little rough around the edges and they still need to come into focus. But I was impressed by Gabriele’s resolve to make wines that truly reflect the appellation.

A generation ago, many Italian winemakers set out to make wines for the American market: if you follow along here at Do Bianchi, you’ve seen my reportage on wine industry greats like Ezio Rivella who have declared — very publicly — that they were “deliberately adopting a California style.”

Above: I thought that Gabriele’s 2007 showed the best in the flight we tasted. It tended toward modernity but didn’t ever lose its continuity with true varietal expression and the appellation.

As we traveled through Italy on this last trip, I found more and more signs of a new generation of young Italians who are looking to enter the U.S. market with wines that reflect their local traditions, even if they do lean toward modernity.

Of all the winemakers we visited, Gabriele was one of a score of thirty-somethings who embrace authenticity (if not tradition) in their approach to their products.

This trend is the opposite of the generation that came before them. Perhaps they take their inspiration more from a renewed sense of identity and purpose than from old man Mondavi and the Napa Valley revolution.

I liked Gabriele a lot and I’m looking forward to tasting the new releases next year when they arrive. 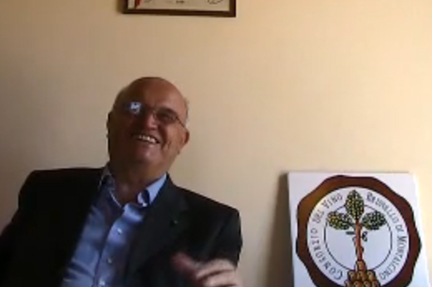 Above: I hope that Tuscan wine writer and internet-based interviewer Carlo Macchi doesn’t quit his day job. I certainly wouldn’t call him the next Antonioni. Although he might give Dario Argento a run for his money. Last week, the newly elected president of the Brunello producers association, Ezio Rivella, told Macchi that “80% of Brunello was not pure Sangiovese.”

You can imagine my utter and profound astonishment when I watched a recently taped interview with the new president of the Brunello producers association in which he stated the following: at least up until the time of the Brunello controversy that broke in March 2008, “80 of Brunello was not pure Sangiovese” and that the practice of adding “3-5% of grapes other than Sangiovese” was “widespread” and “commonly accepted” among the 250 or so bottlers of Brunello di Montalcino. (The interview was filmed in two parts: the above statements were made in the second segment, and here’s a link to the first.)

The interviews were conducted last week by Italian (Tuscan) wine writer Carlo Macchi, editor of the online wine magazine WineSurf. The videos came to my attention via the weekly web news roundup published on the Italian Sommelier Association website by Mr. Franco Ziliani (who, btw, is not currently blogging right now).

I’m only partly astonished by the figure. In fact, most people whom I’ve spoken to on the ground would arrive at the same figure more or less through guesstimation. As Gian Franco Soldera told me when I visited with him in September 2008 (at the height of the crisis), “the tanker trucks come in weighted down, their load riding low to the ground, and they leave riding high.”

No, what amazed me was the nonchalance with which Rivella brandished this astounding figure. But at the same rate, considering the fact that he spent four decades (the majority of those at the helm) at the largest producer in the appellation (you don’t need me to tell you who that is), I’m not surprised that he would so unabashedly utter these words. And in all fairness and in honesty, I must applaud Rivella for sharing this insight (so often spoken sotto voce, under one’s breath in Montalcino) in a public forum.

What alarmed me was the fact that Rivella also told his interviewer that “for the moment were not going to be talking about changing the appellation to allow for grapes other than Sangiovese.” The law states that the producers get to decide the rules, he explains, and the producers have voted for 100% Sangiovese. But — ugh and here it comes — “we will discuss changing it in future because it needs to be changed.”

When asked the wine figure that impressed him the most, he replied Robert Mondavi. Are you surprised?

I translated and paraphrased some other highlights (?) here at VinoWire.