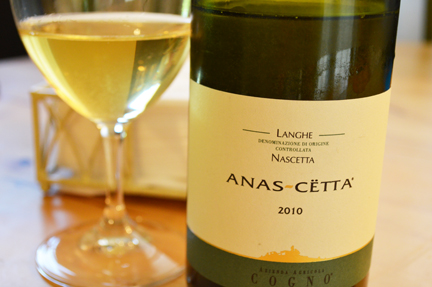 Ever since winemaker Valter Fissore treated me to vertical tasting of his Nascetta (stretching back to 2001), I’ve been obsessed with this wine. That was back in 2008 and I’ve collected the wine with each new vintage since then.

Click here for a thread of posts devoted to this wine, including the correct pronunciation of the grape name and notes on its origins (and Valter’s unique spelling).

So when my local wine merchant (in Austin, Texas) told me that he was closing out his last five bottles of the 2010, I told him I’d be happy to take them.

I was glad to pick up the wine at such a good price but I was also happy to get the last few bottles left in Texas: now that the winemaker is importing the wine to the U.S. himself, he’s lost his Texas distribution and I imagine it will take some time before he gets his foot back into the iron-clad Texas door.

Valter is part of a new wave of Italian producers, small and large, who have shunned the traditional avenues paved by the big importers and their corporate-minded distributors. Instead, as a self-importer, the wines ship from Italy, kiss a dock in the U.S., and then go directly to the distributor. And he only ships wines when the distributor places an order, thus eliminating U.S. storage costs.

“It’s based on the Dalla Terra model,” he told me when I tasted with him at Vinitaly this year, referring to industry veteran Brian Larky’s “winery direct” system.

“All of the wineries use USA Wine West,” a importing and distributing service, said Valter’s broker, Becky Vuolo, an American based in Piedmont. “They just do our clearance and doc[ument]s. Nothing is stateside (no inventory). The wines go directly into our distributors’ warehouse who ordered them.”

Above: The main church of the Abbazia di Novacella (Novacella Abbey), one of the iconic Italian wineries that has recently begun “self-importing.”

Becky currently works with three wineries — Abbazia di Novacella (Trentino-Alto Adige), Cottanera (Sicily), and Cogno (Piedmont) — as their U.S. sales manager. Those familiar with the North American Italian wine market might be surprised to learn that such iconic wineries have embraced this strategy (Valter’s is the smallest of the three). And of course, it comes with some pitfalls.

Anecdotally, I’ve been told that Valter faces some serious challenges in certain U.S. cities where he’s trying to rebuild his market presence. And I imagine he has a long and hard road ahead of him.

But after the 2008 U.S. wine trade “reset” (in the wake of the financial crisis), with wineries and importers regularly and wildly shifting alliances, his story is a common one. Many winemakers are now “parcelizing” (my term) the U.S. wine market and have begun to work more closely with small importers and distributors whose territory often covers just one state.

In California (where I’m a wine buyer), many labels are represented by different importers and distributors in the northern and southern territories. In more than one instance, I’ve had two different distributors show me the same wine (both of them claiming to have exclusive distribution rights).

Whether or not this trend will prove beneficial for wineries and consumers has yet to be seen. In states like wild-west California (one of the most liberal in the U.S. in terms of the regulation of wine sales), it seems to make more labels available and at friendlier prices. In states like business-friendly-unless-your-selling-wine Texas, the Valter Fissores of the world face seemingly insurmountable challenges.

I’m sorry to see Valter’s wines disappear from the shelves of my local wine merchant, but I’ll manage to collect the wine through other channels in the meantime.

The 2010 is stunning and it just kept getting better over the course of three nights. In the more recent vintages, Valter told me, he’s been aging the wine and stirring it on its lees. The result is a richness in mouthfeel and an intense minerality that you rarely find in an Italian white wine at this price point (under $30). The 2010 is still very youthful in its evolution and it impressed me with how electric it was (even after three days open in the refrigerator). It was brilliant with cast-iron-pan-fired pork white flour tacos topped with guacamole and salsa: its depth of personality (such a unique wine!) went head-to-head with the vibrant flavors of the dish.

As I munched down my taco and enjoyed one of the “last bottles” in Texas, I couldn’t help but think about how much the wine industry parallels the music industry these days, with more and more “producers” going independent.

Like a song, a bottle of wine doesn’t have much meaning if its author just keeps it at home locked up in the cellar. This wine really sang to me and I sure hope that its music ain’t over.

Thus beginneth the second year of white wine… (IWG got me excited about Latin this morning.)

Last year was my first official “year of white wine.” Tracie B and I kicked off the second last night with colleagues at our favorite Austin wine bar Vino Vino.

The 2006 Santa Chiara by Paolo Bea was deep golden in color (the result of skin contact during maceration, no doubt) and showed gorgeously. My favorite vintage of this wine so far.

The 2005 Savennieres Les Clos Sacrés was oxidized and unctuous, “mouth watering,” in Tracie B’s words (I’ll leave you salivating for her tasting notes at My Life Italian).

And while I’m loving Josh Loving’s superb list at Vino Vino (and was very psyched to find out he’s a fan of my band Nous Non Plus!), the most intriguing wine was brought by one of my colleagues: Anas-Cëtta by Elvio Cogno, a grape variety I’d never tried before. Click here for the fact sheet.